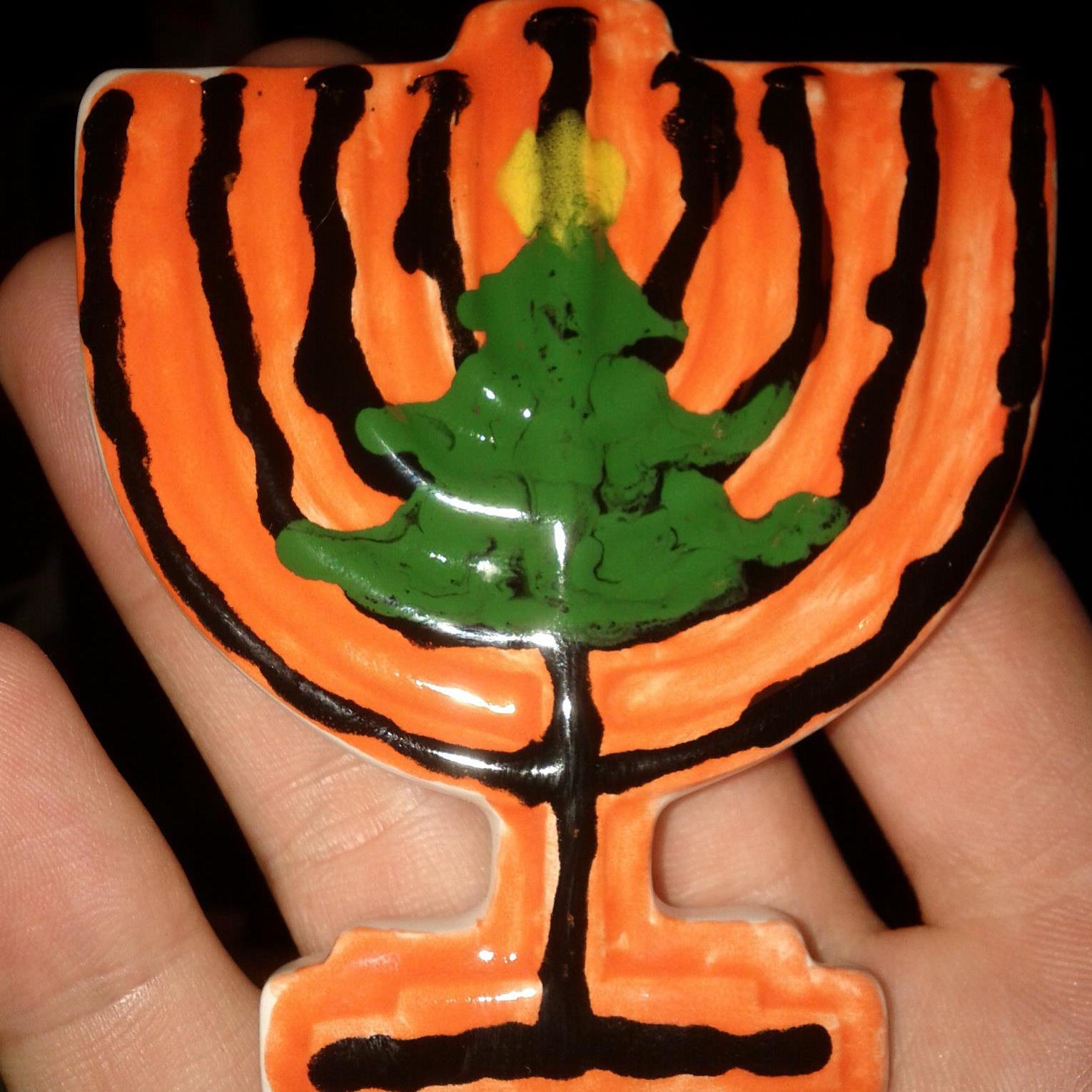 Gobble gobble, y’all. Hope you had a nice Thanksgivukkah weekend gathering ‘round your menurkeys and setting up your Menorah Trees. I love mashup holidays.

Along with these great new decorations, Thanksgiving and Hanukkah both share religious freedom as a common theme. Pilgrims fled to America to practice their faith freely, just as Israel’s Maccabees defeated Antiochus to practice their religion in peace.

“This Thanksgivukkah we can be grateful – very grateful – that in a world torn apart by sectarian conflicts and ethnic divides, the United States stands out as a sign of hope that people can, in fact, live together with deep religious differences.”

These differences were put on display in Times Square last week in the latest billboard war between theists and atheists. A Christian group put up a billboard that reads: “To All Of Our Atheist Friends: All He Wants for Christmas Is You” (not to be confused with the epic Mariah Carey jingle). Down the street, the Center for Inquiry put one up that says: “Millions show love and gratitude without God.”

As though traveling through a winter storm for the holidays weren’t challenging enough, Sikhs who wear turbans are often subjected to additional screening at airport security checkpoints. An updated travel app called FlyRights aims to document and highlight perceived discrimination.

In SCOTUS news, the Supremes decided to hear Hobby Lobby’s religious freedom challenge to the Obamacare contraception mandate. Hobby Lobby and other plaintiffs make their case by pointing to the 1993 Religious Freedom Restoration Act, which prohibits the government from substantially burdening a person's exercise of religion without "compelling" reason. Mark Silk says a win for Hobby Lobby would strengthen the Constitution’s Free Exercise Clause but would not be a win for religious freedom.

Elsewhere in the U.S., construction workers in Philly were asked not to smoke, swear or drink coffee while building a new Mormon temple. And an Amish girl and her family fled Ohio to avoid court-mandated chemotherapy, which they oppose on religious grounds.

Big news on the international stage? Angola banned Islam. No it didn’t. Despite some erroneous reports, you can still be Muslim in the country, though not without persecution.

A new report from the Church of England recommends blessing services for gay relationships (aka weddings in all but name). Not to be outdone, the U.K. Methodist Church is deciding whether to perform same-sex weddings.  Britain’s Supreme Court rejected an appeal from a Christian couple who denied two gay men a room at their hotel. The court said their actions represented discrimination.

A member of Scottish Parliament has relaunched an assisted suicide bill despite government opposition. Belgium, which already allows adult euthanasia, moved to grant the same rights to sick children.

Some German states are none too pleased that the country’s domestic security agency will soon stop monitoring Scientology on the grounds that its popularity is waning. Don’t be surprised if the German government (and others in Europe) pop in for an occasional raid on the church. Raids on nontraditional religious groups are at an all-time high in recent decades, according to Stuart Wright, an expert on the subject.

France is notorious in some circles for its unequal treatment of faith traditions, including Scientology. A French court recently fined a publishing house for disseminating “anti-Semitic” content, while an appeals court in Paris upheld a school’s right to fire a Muslim teacher who wanted to wear a headscarf in class.

Speaking of headgear, China's Xinjiang region has launched “Project Beauty,” a campaign to discourage Muslim women from covering their faces. I’m pretty sure Muslim women don’t veil to cover up being ugly, China.

No free hugs in Saudi, but plenty to go around in Pakistan, where a man dressed up in this incredible YouTube costume hugged strangers to protest an ongoing ban placed on the video sharing site during last year’s Innocence of Muslims controversy.

Pakistan is unlikely to ditch its blasphemy law anytime soon. The Netherlands looked set to do so, but is now having second thoughts.

A new draft of Egypt’s constitution calls freedom of belief “absolute” rather than merely “protected,” but it  bans political parties based on religion and doesn’t offer significant protections for religious minorities, analysts say.

A religious court in Israel has fined a woman $140 a day for refusing to circumcise her infant son.

In Russia, a religious couple faces jail time for rushing their child, injured in a car crash, to a church to be baptized rather than to a hospital for treatment. The child died before reaching a priest.

The (unofficial) symbol of Khallowistmas, celebrated annually on Dec. 3.

Alcohol isn’t banned on Khallowistmas! If you thought Thanksgivukkah was a great mashup holiday and enjoy a bit of Festivus wrestling,  you’ll love my favorite invented holiday. Break out the Manischewitz, pop on The Nightmare Before Christmas, and enjoy the best October, November and December have to offer.

A friend and I have celebrated Khallowistmas every December 3 since 2008, when after setting up the Christmas tree we realized the walls were still covered in pumpkins and skeletons. The solution was obvious: a candy corn-infused holiday cake. Thus was born an annual tradition. Good origin story, huh? I might tell you more if you sign up for the Recap below.