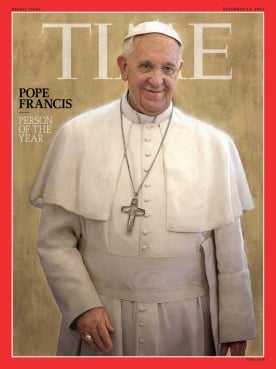 Time magazine’s cover shot of Pope Francis, “Person of the Year” for 2013

1) SHOCKER! POPE FRANCIS IS “PERSON of the YEAR” Time magazine announced its choice this morning, and it came as no surprise — except perhaps to fans of Edward Snowden and Miley Cyrus, who had high hopes. Time’s Nancy Gibbs has an essay to explain the choice, and the paradox of a celebrity pope: “How do you practice humility from the most exalted throne on earth? Rarely has a new player on the world stage captured so much attention so quickly — young and old, faithful and cynical — as has Pope Francis.” So now we vote for “Pope of the Year.” It’s an unusually crowded field: 1) Francis; 2) Benedict.

2) THE VATICAN KVELLS, THE POPE DEMURS: From papal spokesman, the Rev. Federico Lombardi, in response to Time’s choice:

“It is a positive sign that one of the most prestigious acknowledgements in the field of the international press has been attributed to one who proclaims spiritual, religious and moral values in the world, and who speaks effectively in favor of peace and greater justice. With regard to the Pope, for his part, he does not seek fame and success, since he carries out his service for the proclamation of the Gospel and the love of God for all. If this attracts men and women and gives them hope, the Pope is content. If this nomination as ‘Person of the Year’ means that many have understood this message, at least implicitly, he will certainly be glad.”

3) THAT’S NOT ALL, FOLKS: Francis has also won “Man of the Year” honors from MTV’s college channel. Pop star Lorde is “Woman of the Year.” MTV said both took unexpected stands — Francis by challenging an obsession with “small-minded rules” and Lorde for her debut single, “Royals,” that knocked a culture of conspicuous consumption. Francis does that too, actually. And he won Facebook.

4) THE VATICAN REALLY DOES WANT TO POLL CATHOLICS: Some bishops and Catholics say that people shouldn’t take it too literally when the Vatican says it wants input from the folks in the pews on what they think about challenges facing the family and the church’s approach. But Rome says it means what it says, as NCR’s Joshua McElwee reports.

5) SUICIDE STRIKES ANOTHER MEGACHURCH FAMILY: Isaac Hunter, 36, the son of the Florida megachurch pastor Joel Hunter who is close to President Obama, has died, apparently by his own hand. The younger Hunter was pastor at Summit Church in Orlando but resigned last year amid various troubles, as the Orlando Sentinel reports. Last April, the son of popular megachurch leader Rick Warren killed himself, prompting a round of self-examination among Christians about dealing with suicide.

6) PRAYERS FOR BILLY GRAHAM: Billy Graham’s son Franklin is requesting prayers for the 95-year-old icon of American Christianity. The elder Graham is home after another hospitalization and “is extremely weak but his vitals are good.” Meanwhile, the first memorial for another icon, Nelson Mandela, was held yesterday but abortion foes are still upset over what some call his record of “genocide” for backing liberalized abortion laws in post-apartheid South Africa. At the memorial, President Obama managed to draw notice for something other than his stirring eulogy. Will this finally put an end to the “Selfies at Funerals” meme? Why do I think it won’t? Then again faking the sign language interpreting at a funeral might take the cake.

7) THE “WAR ON XMAS” UPDATE: At “First Things,” Matthew Schmitz defends “Xmas” from its detractors, God bless him. The Rev. Peter-Michael Preble also has some choice words for “War on Christmas” types – he used to be one. “Then I started to see news reports of how Christians are being treated in other parts of the world and suddenly it all seemed so stupid.” Your Graphic of the Day is a flow chart on how to respond to various holiday greetings, and if you want a lift amid all this check out the punk band Bad Religion’s new Christmas album. They’re great tracks, and NPR has a sample. And if that doesn’t work try the Whisky Advent Calendar. It’s not too late to play catch-up.

8) WASTING MONEY ON MARRIAGE? One government program conservatives will support is the one that spends taxpayer dollars to bolster marriage and lower the divorce rate. But the Tulsa World reports that after more than a decade of spending mainly welfare dollars in one of the most ambitious such efforts in the nation, Oklahoma has little to show for its efforts. And poverty has increased.

9) TWEET OF THE DAY: This one goes out to Mark Driscoll’s Mars Hill congregation:

10) VIDEO OF THE DAY: Does God love online gaming? Watch legislators josh a bit over the Almighty and the Antichrist.