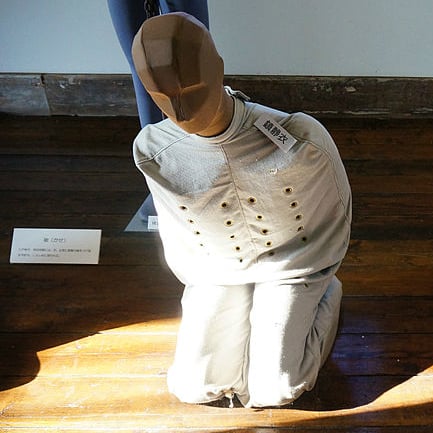 A mannequin in a straitjacket in the Abashiri Prison Museum in Japan
December 19, 2013
Brian Pellot

U.N. officials love to pretend that all human rights are complementary, that societies enjoy religious freedom and freedom of expression with little conflict or controversy. This utopian outlook is far removed from reality, as a new Reporters Without Borders report makes all too clear.

Blasphemy: Information Sacrificed on Altar of Religion highlights the many ways in which states and societies, often motivated by politics and power, use religious sensitivities to stifle dialogue, debate and dissent.

47 percent of countries have laws that penalize blasphemy, apostasy and/or defamation of religion. In many of these countries, bloggers and journalists are censored, arrested or murdered for merely reporting the facts of a developing story.

Religiously justified censorship and backlash are often ad hoc and unpredictable, prompting writers, cartoonists and commentators to self-censor before publishing potentially “blasphemous” or “defamatory” ideas. Considering the legal and social uncertainties around religious offense, many journalists play it safe and avoid reporting critically on news that touches on protected faith or belief systems.

These straitjackets are tightest in the 15 majority-Muslim countries that operate under Shariah law, where politics and religion are intertwined and challenging the government often means challenging God. Though probably the worst offenders, these countries are by no means the only ones stifling free expression in the name of religion.

A map in the new report shows all countries where blasphemy, apostasy and religious defamation are punishable by law. 24 of the European Union’s 28 member states have defamation of religion laws and eight have blasphemy laws on the books. These laws are seldom invoked in E.U. countries, but their continued existence allows those that do enforce them harshly, especially in the Middle East, to point West and shrug off calls for reform.

Ultimately these laws on religious offense serve political ends. If a theocratic government wants to suppress an unflattering story, it can cry blasphemy and knock off the reporter. In (somewhat) less draconian states like Indonesia or Russia, officials can appeal to wholly subjective and ambiguous laws pertaining to the “sensibilities of believers,” “religious feelings,” “religious discord” or “traditional values” to suppress dissent and bolster state authority.

When these laws are invoked, information is suppressed and the state’s hegemony is strengthened. Laws concerning blasphemy, apostasy and defamation of religion are anathema to free expression, free press and a free society. In most cases, these laws also limit religious freedom, either by protecting one faith above all others or by denying individuals the freedom to intelligently criticize and investigate belief systems.

The phrase “nobody has the right not to be offended” has become cliché and politicized, but in this context, it must hold true. Reporters Without Borders' new report recommends that international institutions reject attempts by some governments, mainly those in the Organisation of Islamic Cooperation, to have blasphemy and religious defamation treated as violations of human rights. I couldn’t agree more.