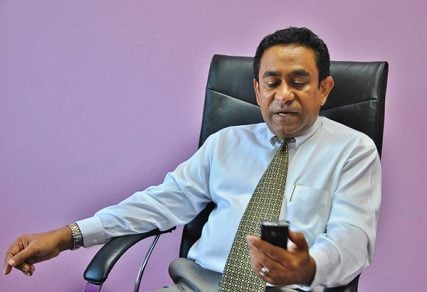 The parliament voted 67-2 last month to limit a husband’s right to have non-consensual sex with his wife. The bill says a husband cannot force his wife to have sex if the couple have filed for divorce, dissolution or mutual separation, and if the intent is to transmit a sexual disease.

Yameen vetoed the bill about a week after the vice president of the Maldives Fiqh Academy, Mohamed Iyaz Abdul Latheef, criticized its passage saying the Quran and the Sunnah, or the teachings of Islam, do not give a wife the authority to deny sex to her husband.

Latheef added that a woman must show “complete obedience to her husband” even if she has filed for divorce.

At a victory rally following the presidential run-off vote last November, Yameen said his coalition had received a mandate “to save the Maldivian nation, to protect the sacred religion of Islam.”

The Maldives, an Indian Ocean archipelago of about 330,000 people, claims to have a 100 percent Muslim population. Its constitution states that “no law contrary to any tenet of Islam shall be enacted.”

A 2007 government study found that more than 92 percent of Maldivian women believe a good wife obeys her husband even if she disagrees with him. Nearly 30 percent of respondents also said a husband can beat his wife if she refuses sex.

The Maldives drew global criticism last February after a juvenile court sentenced a 15-year old girl — who was raped by her stepfather — to 100 lashes on charges of fornication. The ruling was overturned by a higher court six months later. 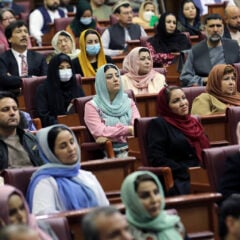 Islam Beyond Phobia
Ramadan fasting isn’t about hunger. It’s about living mindfully.
Follow us on Facebook!
Submit your photos to RNS