PARK CITY, Utah (RNS) In days of old, God used a burning bush to get Moses’ attention. Today’s prophets are often the truth-telling artists, singers, songwriters and filmmakers whose modern version of “Thus sayeth the Lord” bursts forth in a stunning, sensual explosion of sight, sound and touch.

They get our attention, and their prophetic word is visceral. It often goes beneath the rational radar and it can disturb more than it comforts. The annual Sundance Film Festival is like a tribe huddled around a campfire listening to the stories. These stories function like burning bushes, as prophetic calls to action. These films are meant not just to be watched, but to change us and, through us, to change the world.

Here are some of the messages I heard at Sundance 2014.

Value the worthy traditions of your youth.

As most young adults jettison their religious trappings, Native American filmmaker Sterlin Harjo is drawn into the hymns from his upbringing in the church. In “This May Be the Last Time,” he discovers the ancient roots of these hymns that connect the spirituals of the South, the whole-note singing of Appalachia and the very heart of his own existence.

A scene from “I Origins” with Michael Pitt and Astrid Bergs Frisbey. Photo by Jelena Vukotic, courtesy of Sundance Institute

There is something very real beyond the physical.

In “I Origins,” a scientist sets out to prove Charles Darwin’s theories of evolution and to destroy arguments for intelligent design. Unwittingly, he is drawn into an exploration of Leonardo da Vinci’s quip that “the eye is the window to the soul.” Reality, it turns out, is more than meets the eye.

The blind can see.

In “Blind,” a stunning piece of storytelling, Norwegian filmmaker Eskil Vogt explores the inner world of a beautiful young woman who loses her sight but finds her fertile imagination can nonetheless take her to places she would never have gone had she seen only through her eyes.

A scene from “Blind” with Ellen Dorrit Petersen and Henrik Rafaelsen. Photo by Thimios Bakatakis, courtesy of Sundance Institute

In “The Overnighters,” a small church and its pastor encounter legions of men who are flocking to North Dakota for a chance to cash in on the energy boom. The community’s family values don’t include welcoming the thousands of down-on-their-luck, blue-collar workers flooding into the community. Who will love these strangers who are now neighbors?

See injustice. Work for what is right.

“Watchers of the Sky” examines the life of Rafael Lemkin, a heroic human rights activist who almost single-handedly created global awareness about the criminal liability of genocide. “The Internet’s Own Boy” traces the life of Aaron Swartz, who urged our nation to “come to its senses” about the legality of accessing and distributing publicly funded and available information, even as the Justice Department charged him with acts of terrorism and ruthlessly pursued the case until he eventually took his own life. “Ivory Tower” looks at America’s overpriced, underperforming system of higher education, just as “Waiting for Superman” did for elementary education.

Parents! Love your children, no matter how messed up you might be.

“Low Down” is the heartbreaking true story of Joe Albany, a brilliant bebop pianist, as told through the eyes of daughter Amy Jo Albany. Joe’s addictions are stronger than his ability to provide for, protect and nurture her as a young child and teen. In “Infinitely Polar Bear,” another true story, Mark Ruffalo plays a bipolar father who is as loving and unpredictable as he is unconventional. With the help of his wife, he finds a way to be a responsible, loving, father while realistically facing the limitations imposed by his illness.

Film allows us to vicariously enter into the world of another person facing their unique challenges in their unique way. For instance, in “Fishing Without Nets”: What would possess a nonviolent, kind, family man to become a Somali pirate? “Obvious Child” asks how anybody could see abortion as the subject for a poignant romantic comedy. In “God’s Pocket,” we’re asked how our lives would be different if we had been raised in a tight-knit, insulated, uneducated, violent and gritty blue-collar neighborhood. Dick Staub is author of “About You: Fully Human and Fully Alive” and the host of The Kindlings Muse (www.thekindlings.com). His blog can be read at www.dickstaub.com. Photo by Karen Mason-Blair

In “Sepideh,” we follow the true story of an amazing and precocious teenage girl in Iran who, against all odds, pursues her passion for astronomy and personal independence while operating within a system designed to keep her as a woman from achieving her dreams. In “Whiplash,” the Sundance Grand Jury Award winner of the dramatic competition,  a young jazz drummer enters the top music school in the nation determined to be the best drummer ever. His obsessive internal drive explodes when it meets an emotionally abusive band director, and the outcome is unforgettable.

(Dick Staub is author of “About You: Fully Human and Fully Alive” and the host of The Kindlings Muse  (www.thekindlings.com). His blog can be read at www.dickstaub.com.) 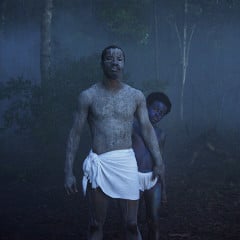 Arts & Culture
Faithful Viewer: Biopic about black preacher is toast of Sundance
Arts & Culture
Sundance Diary: Imagining the world as it ought to be
Follow us on Facebook!
Submit your photos to RNS