But it’s not quite roomy enough for Newark Archbishop John J. Myers. 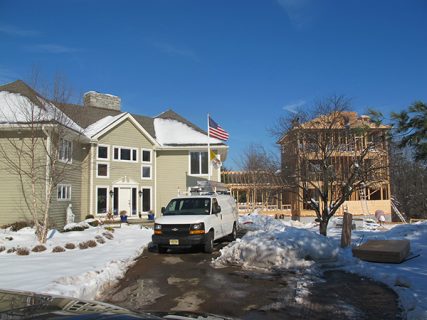 The Archdiocese of Newark is paying more than a half million dollars for a 3,000-square-foot addition to Archbishop John J. Myers’ summer and weekend residence in Franklin Township, Hunterdon County. The three-story addition will include an indoor pool, a hot tub, fireplaces and an elevator. Photo by Mark Mueller, courtesy of The Star-Ledger

Myers, who has used the house as a weekend residence since the archdiocese purchased it in 2002, is building a three-story, 3,000-square-foot addition in anticipation of his retirement in two years. He will then move in full-time, a spokesman for the archbishop said.

The new wing, now just a wood frame, will include an indoor exercise pool, a hot tub, three fireplaces, a library and an elevator, among other amenities, according to blueprints and permits.

The price tag, the records show, will be a minimum of a half million dollars, a figure that does not include architectural costs, furnishings and landscaping.

Construction is progressing as Myers asks the 1.3 million Roman Catholics of the archdiocese to open their wallets for the “archbishop’s annual appeal,” a fundraising effort that supports an array of initiatives, including religious education, the training of future priests and feeding the poor.

More significantly, it comes at a time when Pope Francis has made profligate church spending a target of his early tenure.

Francis, who eschewed the papal palace for a modest guest apartment and who gave up a Mercedes in favor of a Ford, has criticized bishops for living “like princes” and has called for a “poor church for the poor.”

In a move that signaled his impatience on the matter, the pope suspended the bishop of Limburg, Germany, in October for spending $42 million to renovate his residence and other church buildings. The German press dubbed the free-spending cleric the “Bishop of Bling.”

“Archbishop Myers obviously is not paying any attention to the pope,” said Charles Zech, who has studied bishops’ spending as faculty director of the Center for Church Management and Business Ethics at Villanova University’s business school.

“This is extreme, way beyond what you’d expect to happen,” Zech added. “I can’t believe the parishioners of Newark are going to allow this to happen.”

One such parishioner, Joan Rubino, was furious when a reporter told her about the work. Rubino, who regularly contributed to the archbishops’ appeal, called Myers a “hypocrite.”

“To ask people to make sacrifices and then to live in a sumptuous residence, it makes me very annoyed,” said Rubino, 77. “Isn’t there a better use for this money?”

Myers’ spokesman, Jim Goodness, said the addition will have no impact on archdiocese finances, saying the cost will be largely borne by the sale of other church-owned properties. Donors also have contributed to the project, Goodness said.

He declined to identify the properties to be sold or provide the amount of the private donations.

“There are not expected to be any expenses that can not be met by other real estate transactions, and it will remain an asset of the archdiocese,” Goodness said. “It is not a personal asset.”

U.S. Conference of Catholic Bishops guidelines state that all dioceses must provide a residence for retired bishops. The guidelines don’t specify, however, what kind of residence is required.

The retired bishop of Trenton, John M. Smith, lives in a modest apartment at a retirement home for priests in Lawrenceville, N.J.

A spokesman for the diocese said last month Sullivan would live at the house with at least two other priests and that it would be used to host diocese functions.

Myers, who turns 73 in July, is required to submit his resignation at 75. He could, however, retire sooner because the pope appointed a co-archbishop, Bernard Hebda, in September.

Goodness said the home’s expansion was required because Myers will continue his involvement in church activities during retirement and will need office space.

Schematics submitted to Franklin Township in 2011, when the main house was retrofitted with an elevator, show the elevator shaft lies next to an “existing office” in the finished basement, but the document does not state the room’s size. The spokesman said he was unaware of an office in the main house.

The addition will house a large first-floor study and a smaller, attached library. A bedroom and sitting room — matching the footprint of the first-floor layout — are planned for the second floor. The third floor will house a 28-foot by 28-foot gallery with sweeping views of the property. Plans call for a fireplace on each level.

A single-story “wellness room” will connect the main house and the addition. There, the blueprints show, workers will install a hot tub and a 14-foot by 7-foot Endless Pool, a brand of exercise pool. The pool’s jets provide a current, allowing one to swim in place.

Goodness said it was too soon to say if Myers would be provided a staff when he moves in full time.

The Rev. Thomas Reese, a senior analyst for the National Catholic Reporter, said Myers, as a diocesan priest, has not taken a vow of poverty. Some diocesan priests inherit large sums of family money. Others supplement their modest salaries by writing books.

The difficulty, particularly in the age of Francis, is one of perception, Reese said.

(Mark Mueller writes for The Star-Ledger.)