“Silence in the face of evil is itself evil: God will not hold us guiltless. Not to speak is to speak. Not to act is to act.”- Dietrich Bonhoeffer

Is silence finally beginning to lose its home within the Church?  I have been reading a growing number of articles, reports, and posts that are exposing long-term systemic sexual abuse and cover-up within some evangelical institutions.  As difficult as these written accounts are to write or read, this is a big step in the right direction.

This past summer, a number of individuals from across the Christian spectrum came together to draft and sign an historic statement addressing sexual abuse within the Church.  It has taken approximately seven months for over 1600 individuals to add their names to support this powerful statement. Though I am thrilled with this response, shouldn’t we be bothered by the fact that just a few months ago a statement to put Duck Dynasty’s Phil Robertson back on the show collected over 250,000 signatures in just a few days? Regardless of what we may think of Mr. Robertson, why is it that so many within the faith community are quick to grieve, get angry, and take action about a reality television star, but don’t seem to want to pay much attention to the fact that sexual abuse is alive and “well” within many Christian environments? 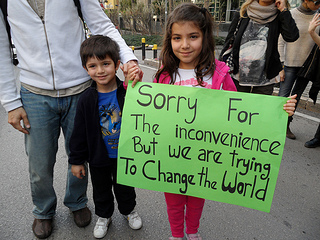 Why are so many of us quick to follow in the footsteps of King David when hearing about sexual abuse. Anger without action is silence.

My prayer and hope is that Christians from around the globe will begin grieving, getting angry (righteous anger of course!) and taking action to address this dark and destructive evil that has camped out in the Church for way too long.  You can act now by reading, signing, and sharing this statement with anyone and everyone. The time is now.

A Public Statement Concerning Sexual Abuse in the Church

Recent allegations of sexual abuse and cover-up within a well known international ministry and subsequent public statements by several evangelical leaders have angered and distressed many, both inside and outside of the Church. These events expose the troubling reality that, far too often, the Church’s instincts are no different than from those of many other institutions, responding to such allegations by moving to protect her structures rather than her children. This is a longstanding problem in the Christian world, and we are deeply grieved by the failures of the American and global Church in responding to the issue of sexual abuse. We do not just believe we should do better; as those who claim the name of Jesus and the cause of the Gospel, we are convinced we must do better. In the hope that a time is coming when Christian leaders respond to all sexual abuse with outrage and courage, we offer this confession and declare the Good News of Jesus on behalf of the abused, ignored and forgotten.

Through the media we have been confronted with perpetual reports of grievous sexual abuse and its cover-up. Institutions ranging from the Catholic Church, various Protestant churches and missionary organizations, Penn State, Yeshiva University High School, the Boy Scouts, and all branches of our military have been rocked by allegations of abuse and of complicity in silencing the victims. And while many evangelical leaders have eagerly responded with outrage to those public scandals, we must now acknowledge long-silenced victims who are speaking out about sexual abuse in evangelical Christian institutions: schools, mission fields and churches, large and small. And we must confess we have done far too little to hear and help them.

Holocaust survivor and author, Elie Weisel, once said, “Neutrality helps the oppressor, never the victim…silence encourages the tormentor, never the tormented.” When we choose willful ignorance, inaction or neutrality in the face of evil, we participate in the survival of that evil. When clergy, school administrations, boards of directors, or military commanders have been silent or have covered up abuse, they have joined with those who perpetrate crimes against the “little ones” – often children, but also others who are on the underside of power because of size, age, position or authority.

It goes without saying that sexual abuse is criminal, but within the Church we also believe that it is the work of the enemy of our souls — evil, horrific sin perpetrated in dark and hidden places, forever altering lives and destroying the faith of the abused. How could such evil be present and overlooked in the body of Christ? Surely as his followers, we would do everything in our power to expose the deeds of darkness, opening the mouths of the mute, the afflicted and the needy. The Church must never hinder those who so desperately need to run to God and his people for safety, hope and truth, while also providing them protection from the great deceiver.

But we have hindered the victims. By our silence and our efforts to protect our names and institutions and “missions,” we, the body of Christ, have often sided with an enemy whose sole purpose is and has always been to destroy the Lamb of God and his presence in this world. Our busyness and inattention have often resulted in complicity in allowing dark places that shelter abuse to fester and survive.

We must face the truths of our own teachings: To be a shepherd in the body of Christ and blind to the knowledge that your sheep are being abused by wolves in your midst is to be an inattentive shepherd. To judge merely by outward appearances is a failure of righteousness. To fail to obey the laws of the land as Scripture commands by declining to report and expose abuse is to be a disobedient shepherd. To be told that wolves are devouring our lambs and fail to protect those lambs is to be a shepherd who sides with the wolves who hinder those same little ones from coming to Jesus. To fail to grasp the massive web of deception entangling an abuser and set him or her loose among the sheep is to be naïve about the very nature and power of sin. To be told a child is being or has been abused and to make excuses for failing to act is a diabolical misrepresentation of God. To know a woman is being raped or battered in hidden places and silence her or send her back is to align with those who live as enemies of our God. Protecting an institution or organization rather than a living, breathing lamb is to love ministry more than God and to value a human name or institution more than the peerless name of Jesus.

Dear church of Jesus Christ, we must set aside every agenda but one: to gently lead every man, woman and child into the arms of our Good Shepherd, who gave his very life to rescue us from the clutches of our enemy and from sin and death — who rose from the dead and called us to the safety of his side. As we follow this Good Shepherd, we will “eliminate harmful beasts from the land, make places of blessing for the sheep, deliver them from their enslavers and make them secure in places where no one will make them afraid” (Ezekiel 34:25-28). Surely it is for such a time as this that the Church has been empowered to boldly and bravely embody the Good News to accusers and accused alike, and to forsake our own comfort and position to love the hurting with an illogical extravagance.

To all who have been abused, broken, deceived and ignored, we have failed you and our God. We repent for looking nothing like our Lord when we have silenced you, ignored you or moved away from you and then acted as if you were the problem. You are not the problem; you are the voice of our God calling his church to repentance and humility. Thank you for having the courage to speak truth. May God have mercy on us all and oh may the day come when his church reflects the indescribable love and compassion of Jesus, even to the point of laying down our lives for his precious sheep.

Click here to add your voice by signing this statement.