VATICAN CITY (RNS) In another strongly worded message to the Catholic hierarchy, Pope Francis on Thursday (Feb. 27) told the Vatican body that vets nominees for bishops that they need to find him better candidates to send to dioceses around the world. 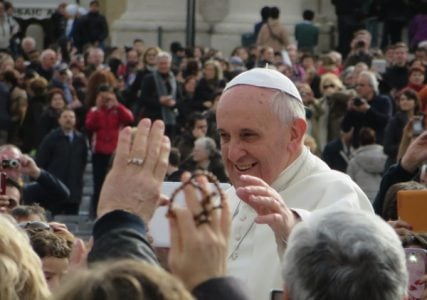 Pope Francis greets a crowd on his way to a meeting with cardinals at the Vatican on Friday (Feb. 21). RNS photo by David Gibson

“To choose such ministers we all need to raise our sights, to move to a higher level,” Francis told the Congregation for Bishops, the critical department of the Roman Curia that acts as a clearinghouse for bishop nominees. “We can’t do anything less, and we can’t be content with the bare minimum.”

On consecutive days last weekend, Francis delivered stern warnings to 19 new cardinals he appointed to join about 150 others in the College of Cardinals: On Saturday (Feb. 22),  he told them to avoid “rivalry, jealousy, factions,” and at a Mass in the Vatican on Sunday (Feb. 23),  he said they must reject “habits and ways of acting typical of a court: intrigue, gossip, cliques, favoritism and preferences.”

Francis also has repeatedly called on clerics to live simply and humbly, and in his address Thursday to the cardinals and staff who make up the Congregation for Bishops, Francis said that self-denial and sacrifice are written into the bishop’s DNA.

He exhorted them to find “authentic” pastors who display “professionalism, service and holiness of life.”

Bishops, he continued, should be “guardians of doctrine, not to measure how far the world lives from the truth it contains, but to fascinate the world, to enchant the world with the beauty of love, to seduce it with the free gift of the Gospel.”

“The church doesn’t need apologists for their own agendas or crusaders for their own battles,” he added, “but humble and faithful sowers of the truth.”

Since he was elected nearly a year ago, Francis has made it clear that he wants to improve the quality of bishops and that he will have no patience for ambitious ladder-climbers who are always looking for a bigger diocese or a cardinal’s hat.

Members of the U.S. Conference of Catholic Bishops gather for Mass at the Basilica of the National Shrine of the Assumption on Monday (Nov. 11) at the start of their annual fall meeting in Baltimore. Photo by Nancy Phelan Wiechec, courtesy of Catholic News Service

The pope has blasted hierarchical “careerism” as “a form of cancer” and derided bishops who strut about in church finery as “peacocks.” He has called on bishops to be pastors who are close to the flock and not “airport bishops” who buzz around the world padding their resumes.

In his talk Thursday, Francis also repeated the words from a speech last June about the kind of bishops he wants, reiterating that candidates should not have the “psychology of princes” and they should not commit “adultery” by constantly seeking another diocese. He asked the congregation to prepare a new document about the rules on how much time bishops should spend in their dioceses.

Under the current system, when a diocese needs a new bishop the papal representative, or nuncio, in each country consults with clergy and others in the diocese and national hierarchy and sends a list of candidates and their dossiers to the Congregation for Bishops in Rome.

The congregation’s members — about 30 cardinals and bishops who work at the Vatican or fly in from their own dioceses — meet periodically to vet the candidates before sending a list of three names to the pope; he usually chooses from that list but can sometime pick another candidate.

Church officials in Rome say Francis has not always been satisfied with the nominees he’s been given and wants to push to change the type of candidates.

In December, Francis raised eyebrows in U.S. church circles when he dropped two influential conservatives from the Congregation for Bishops, Cardinal Raymond Burke and Cardinal Justin Rigali, both of whom reportedly wielded great influence in pushing appointments to the U.S. hierarchy under Pope Benedict XVI.

Francis added Washington’s Cardinal Donald Wuerl, who is considered a more moderate and pragmatic bishop, instead.