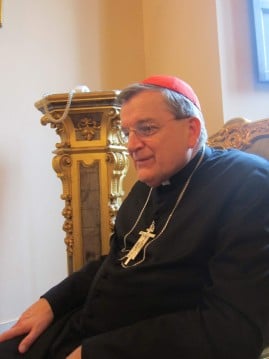 Cardinal Raymond Burke in his office in the Roman Curia, 2012. Photo by David Gibson

After last month’s annual meeting of the U.S. Conference of Catholic Bishops, I wrote a story handicapping the four American churchman who enjoyed growing influence in the new(ish) pontificate of Pope Francis.

They were Cardinal Sean O’Malley of Boston, who is one of the eight members of Francis “kitchen cabinet” of advisors on reforming the Roman Curia; Cardinal Daniel DiNardo of Galveston-Houston, who was elected vice-president of the USCCB and is the likely incoming president in three years; Cardinal Donald Wuerl of Washington, whose advice the Vatican has tapped and who was rumored for an important curial post; and Cardinal Raymond Burke, head the Vatican’s canonical court system and more importantly a member of the Congregation for Bishops. That latter role gave Burke a decisive voice in pushing through a number of key stateside appointments, sometimes against the wishes of U.S.-based bishops.

Burke was something of an outlier on that list — a very conservative holdover from the Benedict XVI era and a fan of the kind of high liturgical finery that Pope Francis does not take to, at all.

Today the calculus of the “Top Four” list changed, perhaps decisively, as Francis dropped Burke from the Congregation for Bishops and added Wuerl. The two cardinals are not known to be allies, to say the least. It’s even less likely now that they’ll be exchanging Christmas cards this year.

Wuerl will remain as Archbishop of Washington but the new appointment means he will make regular trips to the Vatican to vet candidates for bishop in the U.S. and around the world — perhaps the most important way that Francis can secure his legacy.

Those looking for more pastorally-inclined bishops will likely take heart in Wuerl’s advance and Burke’s retreat. But Francis also dropped from the Congregation two other cardinals, both Italians, considered allies of Benedict XVI — Cardinal Mauro Piacenza, 69, described by one Vatican-watcher as “one of the former pope’s most conservative appointments in the Roman Curia,” and Cardinal Angelo Bagnasco, 70.

Just as important: also apparently no longer on the Congregation is former Philadelphia Cardinal Justin Rigali, a longtime Vatican insider and leader of the Old Guard who continued to exert influence in the appointment of bishops long after he left Philadelphia under something of a cloud because of the abuse scandals.

In addition to Wuerl, Francis added Archbishop Vincent Nichols of Westminster, Cardinal Francisco Robles Ortega of Guadalajara, Mexico, Cardinal João Braz de Aviz, a Brazilian who already works in the Curia, Archbishop Pietro Parolin, the pope’s new Secretary of State, and Archbishops Beniamino Stella and Lorenzo Baldisseri. The latter is organizing next fall’s synod of bishops. All are seen as more in the mold of Pope Francis.

It remains to be seen how and whether this affects the type of episcopal appointments.