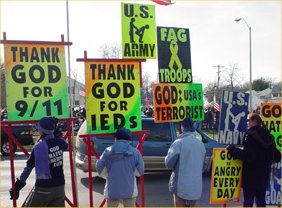 Rather than picket Fred Phelps' funeral, which now seems imminent, we should give thanks for his gift to American society. So what's the gift? It's that he made religious hostility to homosexuality repulsive.

Go to the Westboro Baptist Church website and you'll find chapter and verse cited to justify, with a smile, the injunction to put "fags" to death. What Phelps preached was the inverse of the Prosperity Gospel: those that tolerate evil (read: same-sex relations) will be cursed and punished. Ergo the picketing of military funerals, the rejoicing in all domestic tragedies, the celebration of whatever punishment God allegedly metes out to Americans. No one, not even Sean Hannity and the KKK could stomach this stuff.

The only time I ever ran into a bunch of Westboro picketers was in January 2009 at the first Obama inaugural. They were on Pennsylvania Avenue, holding up their signs and talking to passersby. They were plenty offensive and if, like the ADL and the Southern Poverty Law Center, you want to call them a hate group, I've got no objection. But by their extreme advocacy, I say they've increased the sum total of tolerance in America. And that's something to be thankful for.