Qasim Rashid is a Muslim who frequently advocates for atheists—surprising some theists and atheists alike.

Rashid, whose new book Extremist will be released next month, is on a mission to promote global religious freedom for all—including atheists. The author of The Wrong Kind of Muslim: An Untold Story of Persecution & Perseverance, he is also a practicing attorney and national spokesperson for the Ahmadiyya Muslim Community USA.

I spoke with Rashid about The Wrong Kind of Muslim, the importance of religious freedom, and how atheists, agnostics, and the nonreligious have responded to his work.

Chris Stedman: Why do you think atheist, agnostic, and nonreligious readers would be interested in The Wrong Kind of Muslim?

Qasim Rashid: When it comes to freedom of conscience I see little, if any, middle ground. Either we champion it universally or we become oppressors ourselves in some capacity or another. My book’s driving argument is that despite our differences in belief, every human being has the fundamental human right to believe or not believe without compulsion of any sort. This right extends to Muslims, Christians, Hindus, Jews, Buddhists, Pagans, and certainly agnostics and atheists.

The Wrong Kind of Muslim demonstrates the devastation that results when a people compromise on religious freedom—my case example is Pakistan and the persecution of its belief minorities. My book speaks up for millions who are unable to speak for themselves in countries such as Pakistan—including atheists—but also brings awareness to the fact that over five billion people suffer under oppression of conscience worldwide. Furthermore, I dispute the notion that oppression of conscience is a “Muslim” issue or a “Christian” issue or a religious issue or a nonreligious issue—it is a human issue.

While embracing and even championing our differences as human beings, I want to unite those of all faith and those of no faith in the fight against oppression of conscience. My book does this by focusing on human rights. Thus, I held myself to the rule that my book would not evangelize or preach religion, which would take away from the more important issue of universal freedom of conscience.

CS: You’re a vocal advocate of religious freedom around the world. What’s your personal connection to this issue? 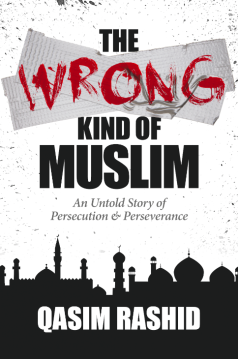 QR: As a Muslim I believe all humankind is equal. Islam and Prophet Muhammad champion universal religious freedom and I intend to carry on this purpose. Additionally, I am a member of the Ahmadiyya Muslim Community. Ahmadi Muslims are Muslims who believe in the Messiah, Mirza Ghulam Ahmad of Qadian. We believe Ahmad came to revive Islam, reform Muslims, and unite mankind by advancing interpersonal and international peace with education, tolerance, and absolute justice. As a result of our belief in Ahmad as the Messiah, the Ahmadiyya Muslim Community presently suffers through horrific state sanctioned persecution and terrorism in countries such as Pakistan, Bangladesh, Indonesia, Libya, Egypt, Palestine, and Saudi Arabia, among others.

The Wrong Kind of Muslim narrates just some of the personal persecution my family and I have suffered through in Pakistan; everything from education and employment discrimination, to police tortures and suicide bombings.  These experiences have helped fuel my passion for universal freedom of conscience for all people.

CS: How has your advocacy been received by atheists, agnostics, and the nonreligious?

QR: Overall atheists, agnostics, and the nonreligious have responded positively to my advocacy of religious freedom. I recognize that there remains a great deal of work to do in bridging the divide between believers and atheists, and some take more convincing than others—I respect that. Thus, for those who are skeptical, I only ask to keep the lines of communication open and keep the dialogue going. The more we can engage and dialogue with one another, the better we can understand each other. In the end it is not about necessarily agreeing with each others’ religious beliefs, but about finding a way to work together towards universal freedom of conscience as a human right for all.

I should also say that I’m taking proactive steps to help address the concerns some atheists may have. Rather than merely condemn extremism in the name of Islam, my next book Extremist specifically repudiates the Taliban version of Islam and the anti-Islam propagandized version of Islam. And as you might guess, it continues to advance the narrative of championing universal freedom of conscience.

CS: Why do you think atheists and theists should work together in support of religious freedom?

QR: Humanity’s future depends on it. While I may disagree with atheists on important things like the creation of the universe—no, I’m not a creationist—the meaning of life, and what will happen after we die, all of these things are wholly irrelevant if we do not protect universal freedom of conscience for all people here and now. The only way that will happen is if we work together to create a world where we can exercise a free exchange of ideas without compulsion.