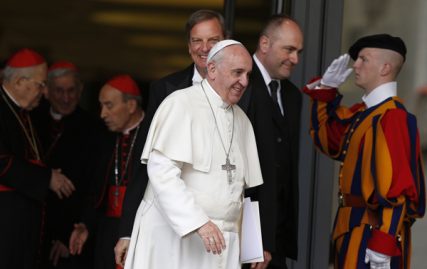 A Swiss Guard salutes as Pope Francis and cardinals leave a meeting in the synod hall at the Vatican on Feb. 20, 2014. Photo by Paul Haring, courtesy of Catholic News Service

(RNS) In his strongest personal remarks yet on the clergy sex abuse scandal, Pope Francis on Friday (April 11) asked forgiveness “for the damage” that abusive priests have inflicted on children and pledged that the Catholic Church “will not take one step backward” in efforts to address the crisis.

“I feel compelled to personally take on all the evil that some priests — quite a few in number, though not compared to the total number — and to ask for forgiveness for the damage they have done by sexually abusing children,” Francis said.

“The church is aware of this damage,” he said. “It is personal and moral damage, but carried out by men of the church. And we do not want to take one step backward in dealing with this problem and the sanctions that must be imposed. On the contrary, I believe that we have to be very firm. Because you cannot take chances with children!”

The pope’s remarks were in an unscripted addition to a speech he was giving to the International Catholic Child Bureau, a French Catholic network that works to promote the rights of children.

His comments were seen as a further effort to counter the criticism he has received for not addressing the clerical abuse crisis as quickly and aggressively as he has other issues.

Last December, the Vatican announced that Francis would name a commission to advise him on establishing rules and best practices for dioceses around the world to combat the abuse of children, and in March the pope appointed the first members.

Half of them are women and one, Marie Collins of Ireland, was sexually abused by a priest as a child. The appointments raised hopes that the commission would for the first time try to tackle the crucial issue of disciplining bishops who do not act to curb suspected abusers.

Still, many advocates are dismayed that Francis has not met with victims and they are upset with his recent comments to an Italian newspaper that the church has been unfairly singled out for criticism on this issue.

“This may be the first time a pope has talked of sanctions against complicit bishops. But that is all it is: talk,” said Barbara Dorris of SNAP, the Survivors Network of those Abused by Priests, a leading victims advocacy group.

“On church governance, church finances, and simple living, he acts,” Dorris said Friday. “On the rape of children, he talks.”