Child molesters are very professional at what they do and they do a good
job at it. – convicted sex offender

One of the many things I have learned in the past 20 years about sex offenders is that they access and target children in a multitude of despicable ways. I have also learned that many offenders within faith communities often use similar methods to perpetrate and silence abuse.  These methods focus on the exploitation of common characteristics of faith communities.

One horror is that many abuse survivors have suffered from such exploitations.  Another horror is that most people of faith are completely oblivious to these destructive and deceitful methods.   Knowledge and understanding of these common exploitations is the first step in protecting our communities from predators who walk in and destroy lives right underneath our noses. 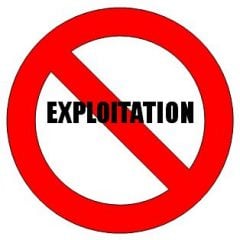 Experienced abusers know how to effectively distort and twist faith language in order to validate abuse and to keep victims silent.  Let’s examine how offenders exploit a faith term such as “sin”. Offenders will often define sin to younger victims in order to justify.  For example, they will tell the child that the abuse is not sinful, but is “The expression of God ordained love”.  When an adult in the church tells a child that abuse is not “sinful”, the confused child is less likely to resist or report the criminal behavior.  As the child gets older and perhaps begins to openly question or resist the ongoing abuse, an experienced offender will attempt to redefine “sin” in a manner that shames the child into silence, such as “You should be ashamed of your sin”.   An abuse survivor once told my friend that her abuser kept her silent and submissive by repeatedly telling her, “Because of your sin, God doesn’t care about you, but I do.”

I recently came across a letter written by a pastor (who now sits in prison) to his 17-year-old victim, which chillingly illustrates this exploitation.  He writes,

This week, I tried to climb into your heart and write the graffiti of the Gospel on the walls. I wanted to spray paint in Neon colors that you are Priceless + Precious + are “off the charts” important – yes – to me personally -but especially to OUR Savior Jesus Christ. I’m reading my Bible now to draw a little closer to God – even if it’s a millimeter closer – because if we both get a little closer to Him, we also get closer + stronger + deeper w/ each other.

The spiritual impact that such exploitation has upon a child is devastatingly complex and oftentimes, lifelong.   Perhaps the greatest damage is that many abuse survivors spend a lifetime attempting to disassociate these distorted biblical truths from their experience. Abuse survivor Christa Brown put this tragic truth best in responding to a friend who attempted to encourage her by telling her to trust God,

It is as though you are telling me that I should pick up that very same sword that was once used to eviscerate me and should fall on it all over again.  I can’t do that.  My love of God, my faith, my own extraordinary desire to live the will of God…those are the very parts of me that were transformed into weapons that savaged and destroyed me.

Not surprisingly, many survivors want nothing to do with anything related to faith.

Abusers in faith communities know that from the earliest of ages, children are taught to “respect and obey” those in authority.  This propels these offenders to actively work themselves into leadership positions in churches and other faith based organizations.  Once authority is grasped, it is immediately exploited to the point that their power and control is justified as being sanctioned by God. The resulting culture is one in which abuse is shrouded in silence and seldom questioned. In her book, This Little Light, Christa Brown recounts how her youth pastor exploited his authority in order to gain her submission. She writes,

Eddie [pastor] always said that God had chosen me for something special.  I guess I really wanted to believe that.  Doesn’t every kid want to think they’re special?  Besides, who was I to question a man of God?  It wasn’t my place.  My role was to be submissive.

How many churches can you think of that are not in need of volunteers to help out with children and young people?  (i.e., nursery, youth group, vacation bible school, etc.).  Many offenders are well aware of these ongoing needs and will go to great lengths to exploit needs for the purpose of accessing and hurting children.   In a highly publicized case, Father Lawrence Murphy filled a teaching need at St. John’s School for the deaf where he sexually abused as many as 200 deaf or hard of hearing boys.  A twenty year old volunteer in a church program for children with special needs was recently charged with sexually abusing two young boys in the program.  A church volunteer in West Virginia was recently charged with abusing at least 12 children while filling a church need. These heartbreaking reports are endless.  The common thread of each is an offender exploiting a need in order to abuse.

I consider church people easy to fool…they have a trust that comes from being Christians.  They tend to be better folks all around and seem to want to believe in the good that exists in people.  I think they want to believe in people.  Because of that, you can easily convince, with or without convincing words. – convicted child molester

Faith communities usually foster a very trusting environment.  For a variety of reasons, we naively tend to automatically lower our guard when we are amongst professing Christians.  This same naiveté is why offenders flock to the faith community.  There is no other environment that I know of where children can be accessed so quickly by so many with little or no concern from others.

Years ago, our family moved to a new city and engaged in the “fun” process of searching for a new church home. At that time, our eldest child was an infant, and at each visiting church she was dropped off at the church nursery.  Yes, I entrusted my child into the care of a complete stranger at a strange new place.   Could you imagine walking into Wal-Mart and handing your child into the care of the greeter while you shopped?  Though I don’t think I would be so careless today, the reason I did not think much about it then was that I immediately trusted these strangers because they were part of a church “family”.  Christians all too often mistake familiarity for trust. However, it is common knowledge that most children are not sexually victimized by strangers.  In fact, one study found that only 10 percent of child molesters victimize children that they do not know.

I recently read a news story about two boys who were sexually abused by their pastor.  The grandmother of one boy stated that she allowed him to move in with the pastor because she thought he “would safe with him”.  What she didn’t know was that her trust had been exploited by a sex offender who had found a profession that gave him unfettered access to abuse children.  It is time that the Christian community come to terms with the heartbreaking reality that those who pose the greatest risk to our children are within our families, churches, and circle of friends.

Understanding the methods of predators is not something anyone wants to think about let alone study.  However, such willful ignorance is what has allowed these criminals to infiltrate our communities and destroy the lives of untold numbers of children.

Don’t you think it’s time that each of us step forward and do what we can to expose these exploitations and protect our precious children?