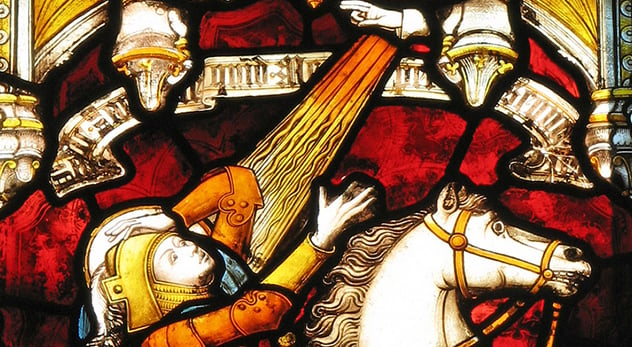 Jesus' love-your-enemies ethic is often juxtaposed with Paul's sword-bearing theology in Romans 13. Who should Christians side with? - Image of "Conversion of St. Paul" from St. John's College, Oxford, courtesy of Lawrence OP (http://bit.ly/1ngmtnB)
May 5, 2014
Jonathan Merritt

Jesus' love-your-enemies ethic is often juxtaposed with Paul's sword-bearing theology in Romans 13. Who should Christians side with? - Image of "Conversion of St. Paul" from St. John's College, Oxford, courtesy of Lawrence OP (http://bit.ly/1ngmtnB)

By Preston Sprinkle and Jonathan Merritt

After a botched execution in Oklahoma left an inmate writhing for 43 minutes before dying of a heart attack last week, Christian leaders began making their cases both for and against the death penalty. As with any time Christians debate political issues, it felt a bit like Ping-Pong—except opponents in this game swing Bibles instead of paddles.

Pro-death penalty believers grounded their position in the Old Testament’s call for capital punishment in the case of intentional murder. Christians who oppose the death penalty countered with Jesus’ teachings on peacemaking and his acquittal of the adulterous woman.

“But what about Romans 13?,” some protested, referring to the Apostle Paul’s remarks that the government does not “bear the sword in vain.”

So who should we side with--Jesus or Paul?

For Christians who believe the Spirit of Jesus inspired Paul to write Romans 13, the answer is both. But how then do we reconcile the apparent contradiction between loving our enemies (Jesus) and killing them (Paul)? The answer, it turns out, requires a bit of digging into Paul’s letter to the Romans.

At first glance, Paul does seem to speak positively about the death penalty in Romans 13:4. He argues that God is sovereign over the government and uses it to avenge evil. But any verse taken out of its complete context is a misinterpretation. Only a few verses prior, in Romans 12:19, Paul commands Christians never to avenge evil but to let God take care of it. Is Paul talking out of both sides of his mouth, encouraging the government to do what he forbids for Christians only a few verses before? What happens when a Christian works for the government? Should she obey Romans 12 or Romans 13? She can’t do both.

The answer is found in a Biblical principle taught throughout the scripture: God often uses broken systems and sinful people to carry out His will. In Genesis 50:20, for example, we encounter Joseph years after his brothers have thrown him into a pit, sold him into slavery, and lied to their father to cover it up. After all this, Joseph says to his brothers, “you intended it for evil, but God intended it for good.” The same human evil that God-followers should rightly condemn was used by God to carry out His will.

Again, in Judges 14, Samson has the hots for a Philistine woman and tells his parents to get her to be his bride. They rightly balk at his choice, since it was against Israelite law to marry idolatrous Philistines. But Judges 14:4 says that “it was from the LORD.” Again, the “it” is both Samson’s poor choice of women and God’s will working through evil circumstances.

The same message reemerges in Romans 13. Paul never tells the church to celebrate, vote for, support, or delight in the death penalty. He only tells them to submit to the government—the same empire, by the way, that beheaded John the Baptist, crucified Christ, and burned many Christians alive in Nero’s gardens.

We find the best analogy to Romans 13 in the Hebrew Scriptures where God uses Assyria and Babylon to carry out His will. In 722 B.C., God punishes Israel through the pagan nation of Assyria. God does the same thing again with Babylon about 150 years later. Just as Romans 13 calls Rome God’s “servant who punishes evildoers,” so also God calls Babylonian king Nebuchadnezzar His “servant” (Jer 27:6; 43:10) and Assyria the “club of my wrath” (Isa 10:15).

Does this mean that God-followers should have supported or celebrated Assyria slaying Israelites and chopping off noses and ears and tongues?

Christians celebrate God’s Lordship over evil, but we never glory in the evil itself. Just as God used the sons of Jacob in their evil, Samson in his evil, and Assyria and Babylon in their evil, so also God can use a secular and sinful institution like the American government to carry out His will. The Christian mandate to love our enemies and never avenge evil is clear (Matt 5:44; Rom 12:19). And in Romans 13, Paul only tells the church to submit. Not to support.

Sometimes God works in and through humans, even when the latter is less than perfect. Or to put it another way, God can draw a straight line with a crooked stick. But if we don’t understand the complex relationship between divine and human agency taught throughout the Scriptures, we’ll miss this and be forced to choose between Jesus and Paul.

Luckily, we don’t have to choose. Jesus’ and Paul’s ethical teaching was exactly the same: Christians are to love their enemies and never avenge evil. This is the final verdict of the One who forgave his enemies from death row as well as the executed author of Romans.

Preston Sprinkle (Ph.D. Aberdeen University) is Vice President of Eternity Bible College's Boise extension and author of Paul and Judaism Revisited: A Study of Divine and Human Agency in Salvation, Charis: God's Scandalous Grace for Us, and Fight: A Christian Case for Nonviolence.

Jonathan Merritt (Th.M. Emory University) is the award-winning senior columnist for Religion News Service and author of A Faith of Our Own: Following Jesus Beyond the Culture Wars and Jesus is Better Than You Imagined.