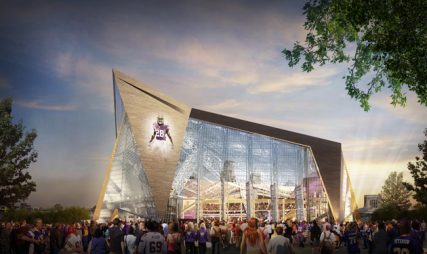 Artist’s rendering of a proposed stadium for the Minnesota Vikings. No, it’s not a new Lutheran church…

Leading off last Wednesday’s roundup I sort of yawned at the gay marriage ruling in Idaho — dog bites man, you know. But then Oregon on Monday, and Pennsylvania yesterday. D’oh! Besides, even dog biting man can be news, especially when artfully phrased …

In ending the state’s ban on same-sex nuptials, Judge John E. Jones III, a Bush appointee used some “moral poetry along with the legal prose,” as our own Mark Silk put it.

Others didn’t read it that way:

Bishop Whisperer Rocco Palmo notes lack of response from the national Catholic hierarchy and he raises specter of white flags:

Hard to see what the options are for opponents. Latest Gallup shows support for gay marriage at an all-time high.

“The Most Morally Bankrupt Reality Show” … ?

Moving on to the other marriage crisis, Slate’s Willa Paskin rips Fox’s “I Wanna Marry Harry,” which premiered last night, as “the most brazenly morally bankrupt reality show to air on network television since the lawless years of the early aughts.”

That’s a pretty high bar. Did anyone watch? Did the show clear that decadent height?

Setting before you life, and death…

Missouri’s plans to execute convicted killer and rapist Russell Bucklew early this morning was halted by an order from Supreme Court Justice Samuel Alito — the latest pause since a botched lethal injection in Oklahoma in April.

Then again, no one seems to like the Supreme Court these days — so they’ve got that in common with the legislative and executive branches. Question: Does anyone like anything these days, besides ice cream?

Meanwhile the Justice Department, under pressure, is expected to release a secret memo describing its legal justification for using drones to kill U.S. citizens suspected of terrorism overseas.

The comedian was on NPR’s “Fresh Air with Terry Gross to talk about the latest season of his show, and talking about his character, the eponymous Louie, he said:

“I’m trying to beat something into his head … he gets confronted with the idea that if you’re intimate with a total stranger, it’s a reckless thing to do. Getting into bed with somebody, simply because you like their body — or because they came on to you — these always lead to bad choices.”

In a follow-up question about what he’d tell his daughters about sex, he kind of downplays the religion angle to this, alas — and reveals it for what it is: like, uh, common sense.

Then again, our own Chris Stedman takes Louis to task for his confusing statements about atheism.

Then again, atheists themselves can be confused about themselves.

Ben Sasse is defintiely not Louis C.K.. He is a Tea Party fave and Republican senate nominee and sure-fire winner in November, and he has a Ph.D in history from Yale. RD’s Sarah Posner read his dissertation so you don’t have to, and excavates some wonderful, or worrisome, depending on your politics, nuggets.

Pope Francis, getting even greener …

At his Wednesday general audience, he continued to make life difficult for climate change skeptics:

“If we destroy Creation, Creation will destroy us! Never forget this!” Francis told the crowd.

“Creation is not a property, which we can rule over at will; or, even less, is the property of only a few: Creation is a gift, it is a wonderful gift that God has given us, so that we care for it and we use it for the benefit of all, always with great respect and gratitude.”

BONUS: Jo McKenna reports from Rome that a senior Vatican official seems to want to try to defuse tensions between the Curia’s doctrinal chief and the American nuns.

Puzzler of the Day

The 59-year-old Brandeis scholar was stricken while attending his daughter’s graduation and at last word was in critical condition in the hospital. Sarna is a remarkable person and more than an academic, as anyone in this biz knows. Paul Berger at the Forward explains why Sarna is “my best source” on all things Jewish.

The NYT has the latest on six young Iranians who were arrested and forced to repent on state television Tuesday for posting their own version of the toe-tapping, spirit-lifting Pharrell Williams tune, “Happy.”

Check out the video to see how terrible was their crime.

If this roundup makes you happy, or you just appreciate our work in general, please consider making a donation — whatever you can — to help us reach our goal for this annual spring fundraiser.

Many thanks from us all.