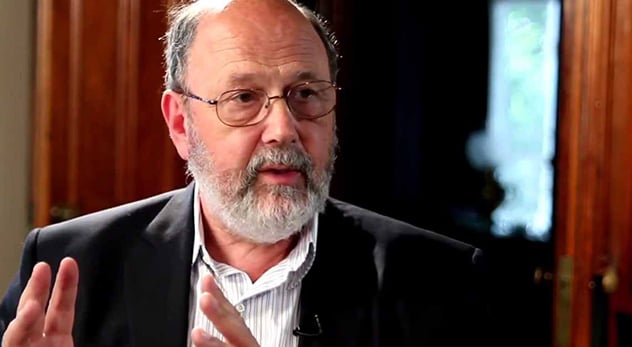 The world’s leading New Testament scholar has written a controversial new book on the Bible that promises to both please and rankle Christians of almost every persuasion.

(Note: This is the first in a two-part interview. Part two centers on the topics of science, sexuality, natural disasters and gender.)

TIME Magazine called him “one of the most formidable figures in the world of Christian thought.” Newsweek once labeled him “the world’s leading New Testament scholar.” His name is N.T. Wright, and he has just written a controversial book on the Bible.

In “Surprised by Scripture: Engaging Contemporary Issues,” Wright comes out swinging on theological hot buttons such as Darwinian evolution, whether Adam was a historical figure, and why he thinks the Bible makes space for women pastors. Here, we discuss his ideas about what the Bible is and isn’t, and why he doesn’t call him a Biblical “inerrantist.”

RNS: No matter where a Christian falls on the spectrum, you’ll find something in this book to love and something to ruffle your feathers. Why did you decide to pen a book that touches on so many contentious issues? Do you expect pushback?

NTW: The book emerged from many different situations over a period of a few years. I didn’t set out to ruffle feathers, but to try to bring some biblical clarity to areas in which many Christians today, in the UK as well as the USA, are genuinely confused. So much of what people take to be “Christianity” is in fact an odd combination of things that really are in the Bible with things that are part of western culture from the last two or three hundred years. Figuring out which is which and how it all works is bound to be puzzling to some people if they’ve been firmly taught something else.

A lifetime of working in some very different churches has taught me that people come with all kinds of odd ideas and that a little clear biblical teaching goes a long way, and also that sometimes people resist it nervously because “it’s not what they said in Sunday School.” I’m all for Sunday schools, but there is a time for people to grow up and see things differently.

RNS: Belief in “the inerrancy of scripture” is a big deal for a lot of conservative evangelicals in America. But you don’t consider yourself an inerrantist. Why not?

NTW: I don’t think I’ve ever said “I am not an inerrantist.” But the controversies which gave rise to that label were strongly conditioned by a shrunken post-enlightenment rationalism, and I would hate to perpetuate that. It’s possible that “inerrancy” is, so to speak, the right answer to the wrong question. It’s a bit like “transubstantiation” in the Middle Ages: if someone asks, “Is Jesus really present in the breaking of the bread?” you have to say “Yes,” but if the only philosophical framework you have for doing so is Aristotle’s metaphysics you will come out with an answer which sends the wrong signals.

My book on scripture’s authority, Scripture and the Authority of God, makes clear where I stand. I take the whole of scripture utterly seriously, and I regret that many who call themselves “inerrantists” manage to avoid the real challenge at its heart, that is, Jesus’ announcing that in and through his work God really was “becoming king” over the world in a whole new way. So I don’t call myself an “inerrantist” (a) because that word means what it means within a modernist rationalism, which I reject and (b) because it seems to me to have failed in delivering a full-blooded reading and living of what the Bible actually says. It may have had a limited usefulness as a label against certain types of “modernist” denial, but it buys into at least half of the rationalist worldview which was the real problem all along.

RNS: We talk a lot about reading the Bible, but you say the Bible reads the modern world. How so?

NTW: This is, of course, a manner of speaking. The trouble is that for many people, the modern world—including the “Christian” modern world—has come with a set of major cultural expectations and has chopped the Bible down to the size which will fit. We need to be conscious and intentional in doing it the other way round—letting the Bible set the terms, and then understanding the modern world within its framework, its great story. Only so will we recognize the things that have gone drastically wrong in our culture and what we should be doing to challenge them.

RNS: You address the question of whether Adam was a historical figure in one of the first chapters of the book, and you’re also an authority on the Apostle Paul. Another Theologian I respect, Dr. Albert Mohler, has written, “If Adam was not a historical figure, and thus if there was no Fall into sin and all humanity did not thus sin in Adam, then Paul’s telling of the Gospel is wrong.” How do you respond?

I don’t know what logic Mr. Mohler is applying in the quote you give. I think it’s probably that of the “covenant of works,” found in the Westminster Confession and elsewhere, according to which God gives Adam a kind of moral test which he fails. Then he runs the test again with Jesus and he gets it right, so his “getting-it-right” (aka “righteousness”) is available for the rest of us. Obviously if you take Adam out of that equation it falls apart.

I do not believe that that is a good way of describing how biblical theology works, for reasons I’ve gone into at length in other books. In particular, I don’t think it’s how Paul expounds “justification by faith.” So I think the “covenant of works” line is a kind of 2+2 = 5 thing. But that doesn’t mean Mr. Mohler and his friends are wrong about a historical Adam. Somewhere along the line there’s a 4+4 = 7 thing as well so the calculation comes out right for the wrong reasons.

The way I see it is that there were many hominids or similar creatures, part of the long slow process of God’s good creation. And at a particular time God called a particular pair for a particular task:  to look after his creation and make it flourish in a whole new way. Actually, this fits with the scientific evidence according to which there were some significant changes in the hominid population and lifestyle around 6000 years ago, though I wouldn’t myself put too much weight on that.

The point is that if you start, not with Adam and a “moral test,” but with Adam and Eve and a vocation (see Psalm 8), then a lot of things in Paul look significantly different. There is more to Paul—and to Genesis—than you might have thought. It all works, it’s all good, it’s all about God’s grace—and it’s about a justification through which humans are “put right” in order to get the original project back on track, so that we might be “putting-right” people for the world. That’s something that’s often been strangely absent from a Westminster Confession type of theology.