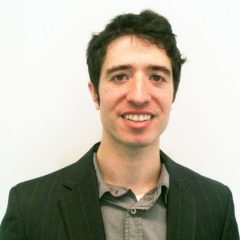 Unlike previous years, Massachusetts Institute of Technology’s 2014 commencement—happening this Friday, June 6—will not include an official prayer.

In April 2014, Aaron Scheinberg—a doctoral student in planetary science at MIT and founder of the school’s Secular Society student group—wrote an opinion piece for MIT’s student newspaper about the long-running tradition of a prayer at graduation, kicking off a campus-wide discussion.

Less than a month later, it was announced that the prayer would be replaced by an “inclusive, secular invocation.”

With the prayer removed, Scheinberg and the Secular Society are already on to their next project: Launching MIT’s first Humanist chaplaincy.

Below, Scheinberg explains how the prayer was removed, why a secular invocation is more inclusive of both religious and nonreligious students than a prayer, and why the graduation prayer campaign convinced him to create a Humanist chaplaincy.

Chris Stedman: You wrote an opinion piece for the Tech calling for the official prayer to be removed from MIT’s graduation celebration, arguing for a more inclusive approach. What moved you to write this piece?

Aaron Scheinberg: When I first heard about the prayer after last year’s commencement, I felt that the practice, though unfair, was innocuous enough that we should choose our battles and leave it be. But I mentioned the prayer in passing at a Secular Society meeting and was struck by how many students not only felt it was unfair in theory, but were also genuinely upset that they were being excluded in this way.

I realized it was a very personal issue to many students and friends, rather than just a matter of theoretical justice. On top of that, not a single student I asked even knew about the prayer. So I decided to write to the Tech with the goal of informing everyone about the prayer and of arguing for its removal in a way that wouldn’t alienate religious students.

CS: How did things progress from you publishing a piece to the policy changing?

AS: First, I got a flood of email responses from undergrads, grads, alumni and faculty thanking me for taking up the issue. That feedback convinced me I wasn’t overreacting—up until then I had only discussed it within our group, which was hardly a representative sample opinion. And I read the negative comments, which for me drove home the privilege some feel their religious practices deserve.

A week after publishing my opinion piece, I engaged with the commencement committee and they responded immediately and respectfully. I was impressed. In preparation for a meeting between the committee, student leadership, and us, the student government decided to survey the entire undergraduate population.

The response was overwhelming. Over 600 overworked students—15 percent of undergrads—took the time to respond. What really amazed everyone involved was that these weren’t just yes or no answers—they were long paragraphs on personal values.

It was a fascinating read. One thing that struck me was the frequent juxtaposition of an atheist saying they felt excluded and a theist saying they just couldn’t grasp why an atheist would feel excluded. It makes me believe there is a communication gap—a trouble with relating that we can all work to improve.

The committee had gained the evidence they needed: This was truly an important and personal issue to many. A couple weeks later, they announced their decision to make the invocation religiously neutral.

CS: Why do you think it is in everyone’s best interest that MIT’s commencement be religiously neutral?

AS: For some religious students, a prayer at graduation is meaningful. They’ve lost something of value to them, and there’s no getting around that—though other theists argued that the generic prayer to an Abrahamic God was not personally meaningful to them anyway.

So what do we offer in return? A campus where different worldviews are respected and all students are treated equally by the administration regardless of religious preference; where we’ll stand up for your religious group if you are being discriminated against. The peace of mind that everyone will feel welcome at their graduation. And the lesson that their religion doesn’t need to be imposed from above, as it were, to be personally meaningful. It took a lifetime to ingrain in theists and atheists alike that Christianity deserves special deference, and it takes time to find that equal treatment will not affect anyone adversely.

CS: The Secular Society at MIT is now working to create MIT’s first Humanist Chaplaincy. Why? How will this help MIT students?

AS: My experience this semester brought home the value of organization. People will keep quiet about an issue if they think no one shares their concerns. Without the Secular Society, I would not have decided to pursue the prayer’s removal. I wouldn’t have received nearly as much encouragement or strategic support. And I might have been taken less seriously if I had been alone rather than a representative of a larger student group.

Sadly, due to leadership turnover, student workload, and the natural skepticism of many atheists towards organized nonreligion, our group’s existence has been sporadic over the years. The best way to ensure continuity and direction within the group is to establish a chaplaincy. Long-term committed leadership will help the community grow and help expand our community service and interfaith activities.

A secular chaplain would also provide a type of counseling that is currently lacking for nonreligious students. Where a religious student might seek a priest’s guidance on existential, ethical or even social matters, to whom can the rest of us turn? The benefits of a Humanist chaplain would not be limited to secular students—everyone benefits when other community members are happier. Further, just as I can reach out to the Catholic chaplain for a nuanced and accurate view of Catholicism, so too will our chaplain be a resource for anyone interested in a fair view of the atheist perspective.