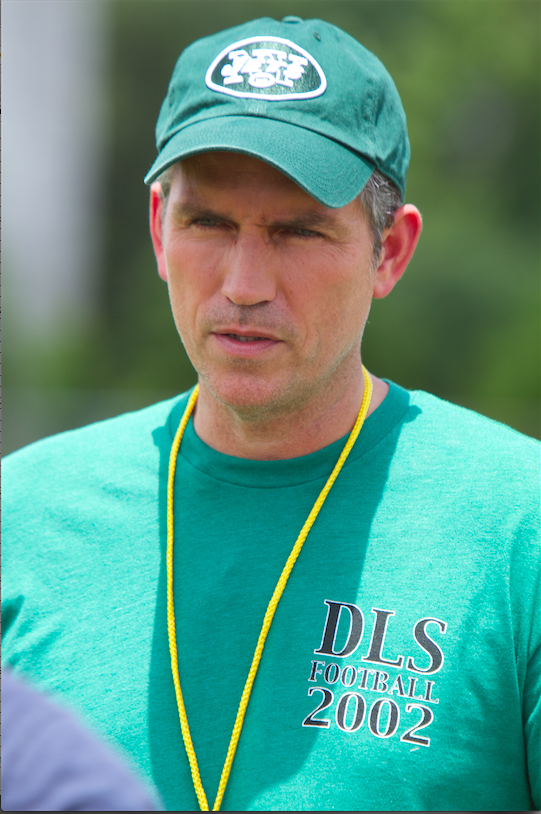 Living in Northern California, a person can only go so long without hearing the name De La Salle. It’s a Catholic high school in Concord, in the East Bay, best known for its incredible athletic program. Their football team went undefeated between 1992 and September 2004 in a 151-game winning streak under coach Bob Ladouceur, whose story is the subject of a soon-to-be-released film, When the Game Stands Tall. I got to watch the film and talk with its star, Jim Caviezel. I asked him about the film, his costar Laura Dern, and soccer.

Part of what’s interesting about this film is that it’s based on a true story and a real person who, until last year, was still coaching. Was that element part of what drew you to this role?

I had a personal experience growing up and playing on a basketball team. I played at Kennedy High School in Seattle. We had done very well that year, and we were about to qualify for the state tournament. We had drawn the number one team in the state and nobody thought we could win. It just so happened that the night before the game, our team went and saw this movie that had just been released, Hoosiers; a film, obviously about a small team beating a big powerhouse. We went out the next night and won that game. That was probably there where I realized how powerful media and film can be in influencing people. Hoosiers certainly influenced us, taking us from a place of non-belief to believing we could win. My dad played for Wooden at UCLA. John Wooden had a lot of influence on my father, and a lot of influence on me. The idea was that Wooden never focused on winning. He believed winning was a byproduct of great virtues.

You played basketball in college and thought that would become your career, but an injury your sophomore year made you stop. How did the virtues cultivated in playing basketball transfer into the kind of person you’ve become?

So, in the movie, Coach Ladouceur never focused on creating a winning football team. What I learned as I got to know about him and De La Salle is that Ladouceur really wanted to create men. He wanted to help them become men of virtue, men who could be depended on. It just so happened that the positive virtues he instilled in his students and players—tenacity, dependability, courage, sacrifice—all of those virtues transferred to the football field with an incredible result.

An athletic career will inevitably involve failure somewhere along the way. The creative life of an actor can be similar. How would you say confronting times of failure in your own life has influenced or shaped you?

Champions are not created through a lack of adversity. Champions are the people who look adversity in the face and say, “Today is not the day I’m going to be defeated.” It’s not how hard you hit, it’s how hard you’re going to get hit and get back up. I think that is truly applicable in a universal way to everyone’s life—the mentality that everyone somewhere can relate to, outside of football.

What have been one or two of your favorite movies of this past year?

I don’t think I’ve watched any movies this last year! I gotta say, I thought Lone Survivor was powerful. Marcus Luttrell is a good friend of mine, too.

Is Laura Dern as beautiful and wonderful in real life as she always appears onscreen?

You know, she’s really a brunette. Of course she was! She’s fantastic. Very generous—she has this flow, a way of working, and very rare actors can do that kind of thing, where they really get the scene. She makes her role very real, very authentic. Authenticity is really important when you play characters like this, because you don’t want people looking at the actors, you want them looking at the characters, because they are real people.

What would you hope when someone leaves this film, that they hold onto and leave the theater with?

Well, I go back to my life, when I walked out of Hoosiers. It wasn’t important to me whether it was a true story or not—the point was, that I believed it. At the end of Hoosiers, Gene Hackman gives a speech to the team and one of the lines kind of slips by, but you hear it at the end. You hear Hackman say, “I love you guys.” I had a feeling when I left my [basketball] team that I could turn to my guys and say, “I love you.” It conjures up emotions and feelings inside of you, and you wish it could be that way. It’s an ideal. This movie takes you to that place, at least for a couple hours. It gives you that feeling of, “It could be this way.”

Down to brass tacks: Who are you rooting for in the World Cup?

Are you crazy? (Russian accent) “I root for the Soviet Union.” I’m pulling for the United States, crazy!

I figured as much! Just wanted to make sure I wasn’t talking to an undercover commie.