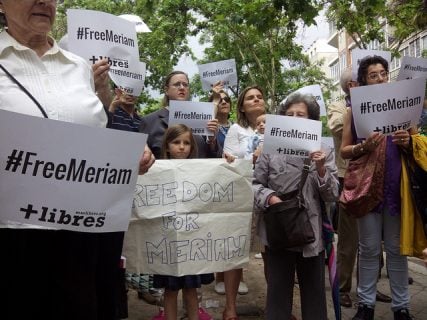 Last month I discussed the heart-wrenching case of Meriam Ibrahim, a Sudanese woman sentenced to 100 lashes and death by hanging for marrying a Christian man and refusing to renounce her faith.

Human rights groups, government representatives and prominent faith leaders rallied to condemn the ruling. Now reports are emerging that a Sudanese court has canceled Ibrahim’s sentence and ordered her release.

Rejoice! For a minute. Until you realize that her life is still at risk.

Ibrahim was forced to give birth while shackled in jail, where her toddler was also imprisoned. Now her lawyer says she’s hiding out in a safehouse. "Her family had been threatened before and we are worried that someone might try to harm her," he told Reuters.

Ibrahim’s is an all-too-common tale. 21 countries have apostasy laws and more than 30 have laws penalizing blasphemy. In Pakistan, which criminalizes both, about 250 blasphemy cases have been registered over the past three decades. No death sentences have been handed out, but vigilantes have killed more than 50 Pakistanis after charges were brought against them.

When a government releases a person accused of crimes against religion, there’s reason to celebrate. But let’s not delude ourselves into thinking that the situation has really changed. Sudan’s apostasy laws are still on the books. Social hostilities against alleged apostates and blasphemers still linger and explode.

Legal reform in these countries is desperately needed, but without shifts in social sentiments, vigilantism will continue to be met with impunity.

Ibrahim’s release is a positive development and no doubt a victory, but until she and everyone in the world can speak freely about matters of faith and belief without fear of physical violence, the fight continues.

The fight continues for Raif Badawi, a Saudi blogger imprisoned for “insulting Islam.”

The fight continues for the seven Bahai leaders imprisoned for practicing their faith in Iran.

The fight continues for all individuals too afraid to share their beliefs and opinions. We must continue to speak out for them until they have the freedom to do so for themselves and for others.