If only the case of Meriam Yehya Ibrahim were unusual.

Last week Ibrahim, a pregnant Sudanese woman, was sentenced to 100 lashes and death by hanging for marrying a Christian man and refusing to renounce her own Christianity. Despite identifying as Christian, the convicting court declared her a Muslim because Ibrahim’s errant father was Muslim. 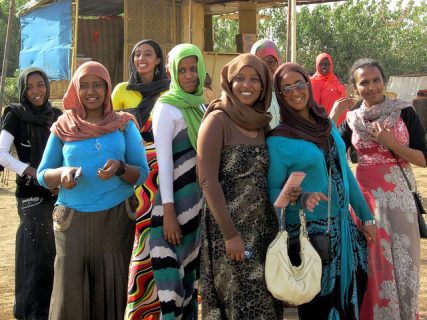 A group of Sudanese women in Khartoum

In Sudan, as is true in many countries that implement aspects of Shariah law, Muslim women are not allowed to marry outside their “faith of birth.” Men on the other hand are allowed to marry Muslim, Christian or Jewish women. Why the double standard? Because sexism. Or according to some interpretations of patriarchal Shariah law…because religion.

Let’s assume that Ibrahim is in a committed relationship to her husband. Because she, a state-identified Muslim, married a Christian man, that marriage is null and void and she’s now been labeled an “adulterer.” Slapped with a scarlet “A” and “slut-shamed” in the process, she and her 20-month-old son sit in prison.

“Slut-shaming,” as the term has been popularly and academically defined, typically means making someone feel guilty for pushing or violating sexual or gender-based social norms.

Slut-shaming is often rife with double standards. Women who sleep around are villainized as “whores” while men who do the same are worshipped as “players.” Some Muslim women who remove their hijabs are accused of bringing shame to their families while their brothers run around shirtless on the beach. Slut-shaming pervades both religious and non-religious societies.

Amnesty International started a petition late last week calling for Ibrahim’s release. “‘Adultery’ is not a crime that should be punishable by the courts,” the petition says. I agree.

When most people think “adultery,” they think “extramarital affairs.” In a recent Pew Research study, 78 percent of people surveyed across 40 countries found extramarital affairs to be morally unacceptable. But in France the number was only 47 percent, showing how greatly attitudes concerning sexual behavior can vary (and suggesting to me that they probably shouldn’t be criminalized).

Religiously motivated or justified double standards against women are not unique to Muslim-majority societies. Kenya, a predominantly Christian country, legalized polygyny last month, allowing men to marry as many women as they like. Most media reported that “polygamy” had been legalized, which was misleading in its inclusivity. Polyandry, which involves women taking multiple male spouses, is still illegal in Kenya. #doublestandard.

Courts of law should not treat individuals differently based on their gender or sex. Marrying outside of your faith should not be considered “adultery.” And “adultery,” whatever it means to whatever society, should not be punishable by law. My thoughts of the day.

Given the Sudan news hook, I may have focused too heavily on Islam in this post. What examples can you think of where religion has been used to “slut-shame” women or men within other faith traditions?