(RNS) A new online essay by the LDS Church says its Book of Abraham is inspired scripture but perhaps not a literal word-for-word translation of ancient Egyptian papyrus scrolls by the faith’s founder, Joseph Smith. 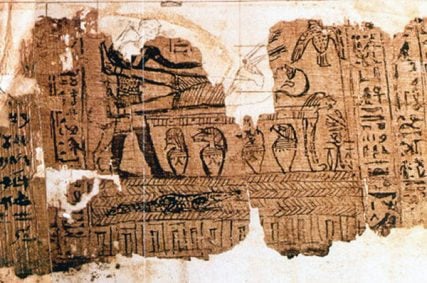 Joseph Smith used this papyrus fragment as one of the sources for the Book of Abraham, a part of the Mormon scriptures. The difference between Egyptologists’ translation and Joseph Smith’s interpretations has caused considerable controversy.

The article says it is possible that the papyri merely served as a catalyst for revelation by Smith that led to his expanding on the biblical account of Abraham. The book is included in a church volume of scripture called The Pearl of Great Price.

The essay concedes that is impossible to prove or disprove the translation since most of the papyri used have long since vanished and are presumed destroyed.

“This (essay) now allows Latter-day Saints to adopt the view that the Book of Abraham was not on the papyri that Joseph Smith possessed as an acceptable orthodox option,” said David Bokovoy, a University of Utah religious-studies instructor who wrote a book about the Book of Abraham.

The “Translation and Historicity of the Book of Abraham” essay comes on the heels of other recent postings designed to help Latter-day Saints and others better understand sometimes-sticky theological or historical issues in Mormonism.

Other essays include explorations of the faith’s former ban on blacks from entering its all-male priesthood, its long-discarded practice of plural marriage and its teachings about the nature of God and mankind’s eternal potential.

Smith said he translated the Book of Abraham after obtaining mummies and papyri from an entrepreneur named Michael Chandler after they were uncovered in Egypt by Antonio Lebolo, a former cavalryman in the Italian army.

The essay says no eyewitness accounts have been found about the translation process. It adds that Smith did not claim to know the ancient languages he translated for the Book of Abraham or the faith’s signature scripture, the Book of Mormon.

Philip Barlow, chairman of Mormon history and culture at Utah State University, said such a conclusion is a “two-edged sword.” It allows recognizing that a religious text should be judged on religious grounds, but he notes that most believers also want to be responsive to what scholars and science may show, too.