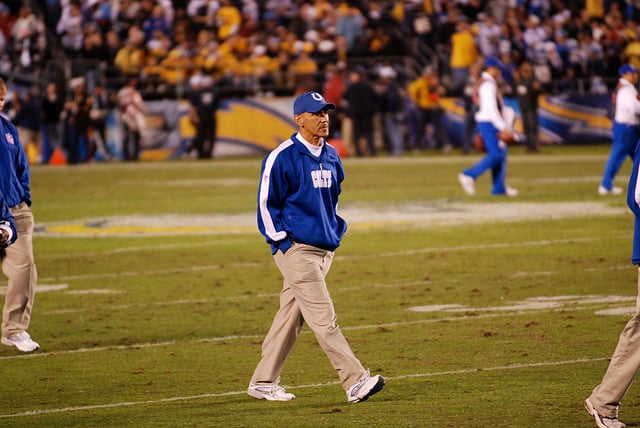 Update: Dungy has issued a statement about his remarks. Read more here.

Tony Dungy has made a lot of waves in his career as an NFL coach. He was the first African-American coach to win the Super Bowl, with his Indianapolis Colts. He became something of a mentor to Michael Vick after Vick’s NFL suspension, and had a #1 bestselling book in Quiet Strength. He’s an outspoken Christian–Quiet Strength had a follow-up men’s Bible study, and was the top defensive coach in the country when he was with the Minnesota Vikings.

A few years ago, Dungy appeared on Fox News’s Hannity and talked about his support of an amendment to Indiana’s state constitution that would define marriage as between one man and one woman. The proposal passed the State Senate but not its house, and the state of gay marriage in Indiana is currently under review thanks to the case of Baskin v. Bogan.

Even though he supports traditional marriage, Dungy’s recent comments about Michael Sam, the first openly gay player to be drafted into the NFL, may still come as a surprise. In an interview with the Tampa Tribune, Dungy said

“I wouldn’t have taken him…Not because I don’t believe Michael Sam should have a chance to play, but I wouldn’t want to deal with all of it…It’s not going to be totally smooth…things will happen.’’

Things will happen is, perhaps, the most insidious part of the statement. Notice the passive voice: “Things will happen.” In other words, Dungy’s hypothetical refusal to draft Sam is motivated entirely by what other people might say. He wouldn’t want to deal with having an openly gay player on his team, and one can only assume that whatever gay men might have played for Dungy in the past would remain closeted in the face of these statements.

As a Christian, this could have been a great time for Dungy to say something different. Something about how the NFL isn’t a church, and whatever you believe about hiring at religious institutions, the football field is the kind of proving ground where your sexual orientation is not one of the things that can get you hired or fired. Dungy could have praised Sam for his courage in being an out player in a hyper-masculine sport, or, if he didn’t believe that, could have, at the very least, chosen to say nothing. If Dungy really believes that Michael Sam should have a chance to play, but is unwilling to take that chance, what does it say about him?

As far as I know, when you draft a player you don’t need to take a moral inventory of what you agree with and don’t in their lives. It’s not a contract that requires you to agree on much beyond what plays to run, and Dungy’s preoccupation with what people would think–how “smoothly” Sam’s transition into NFL life will be–betrays his unfortunate priorities.

Arts & Culture
Arian Foster: Can you be an atheist in the NFL?