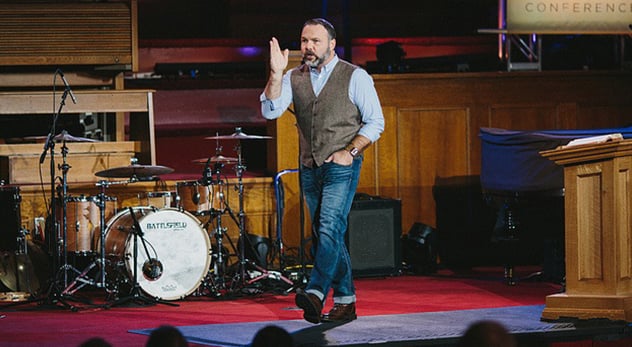 Pastor Mark Driscoll says he’s sorry for inappropriate comments made under a pseudonym in 2000. Here’s why Christians should accept his apology. (Photo courtesy: Resurgence Conference 2013)

Well, we’ve just concluded another week in American evangelicalism. Which is to say, we’ve witnessed another Mark Driscoll blunder.

This has for sure been a rough year for the Seattle-based mega-church preacher. He was accused of plagiarizing in multiple books, which resulted in a tepid but public apology. He embarrassed himself by crashing a conference hosted by another pastor, John MacArthur. And former staff and church members spoke out about the oppressive environment at Driscoll’s Mars Hill Church. These gaffes join a legion of others. After the flood of criticism he received, Driscoll quit social media and has retreated from the public eye.

But another shoe dropped last week when Christian author Matthew Paul Turner posted a series of discussion board comments by Driscoll under the alias “William Wallace II” in 2000. Driscoll’s opinions, though 14 years old, were nothing short of vile. In addition to being expletive-laden, they were misogynistic and homophobic (and I do not use either term lightly).

In response to the furor his comments created, Pastor Driscoll apologized yet again, saying his statements were “plain wrong” and he “remains embarrassed” by them. His apology was predictably rejected by the growing gaggle of Driscoll critics, a group that has become evermore vampirical in their thirst for Driscoll’s blood. But I accept Driscoll’s apology and other Christians should too.

I’m reminded of an occasion where the the saltiest and stubbornest disciple, Peter, asked Jesus a most pointed question: “Lord, how many times shall I forgive my brother or sister who sins against me? Up to seven times?”

Jesus answered Peter, “I tell you, not seven times, but seventy times seven.”

Any New Testament scholar can tell you that Jesus was not merely upping the limit of times one must accept the apologies of a repeat offender. He was not saying that on the 491st offense, we are free to toss our brother or sister overboard and pray for a shark attack. No, Jesus was obliterating the ceiling on Christian forgiveness.

[tweetable]The way of Jesus is not the most practical, desired, or cathartic path.[/tweetable] But it is an endlessly forgiving one.

Some reading this will be flabbergasted that I would accept the apology of a serial abuser like Mark Driscoll. Save your fury for someone without my publishing history. I have more than a dozen articles reporting and commenting on the deplorable actions of Mark Driscoll in the last year alone. So type your little heart out in the comment section. I won’t read it.

When Christians have grown so bitter toward someone that we can’t even accept their apologies, something has gone seriously wrong. If Driscoll had ignored these comments, his critics would have excoriated him for his silence. But when he says he is sorry, they criticize him still. We must refuse to create lose-lose situations for each other where one is damned if they apologize and damned if they don’t.

Let me be clear: Accepting Driscoll’s apology does not mean we excuse his reprehensible actions in the past, fail to call him to better behavior in the present, or ignore future abuses if (or when) they occur.

I hope that Mark is genuinely trying to carve a different path for himself. One that is isn’t so angry and arrogant, sex-obsessed and sexist, dishonest and defensive. I hope that his recent actions signal a change in course. A change, that is, because I don’t expect a total and immediate about-face—sanctification is a slow, chipping away after all.

Some have said that he needs to be publicly shamed. Mark Driscoll has heaped shame on many, and now his critics apparently want to return the favor. Apparently, that whole “do not repay evil with evil” thing doesn’t apply to us and that “love your enemies” bit was just Jesus being cheeky.

Others claim Mark must resign as pastor of Mars Hill Church. I agree this is probably best. Not because he needs to pay for past sins, but rather because his pattern of behavior indicates to me that he should spend time with some wise counselors who can help him sort through whatever he’s spent his life inappropriately processing.

But demanding accountability and reconciliation is a far cry from rejecting one’s apology.

Oh, how I wish we could conjure the spirit of the late Brennan Manning. We need him now more than ever. As Manning reminded us in his final book, grace is for…

The inmate who promised the parole board he’d be good, but he wasn’t…

The liar, the tramp, the thief; otherwise known as the priest, speaker, and author…

This means that there must be grace for the abused and the abuser, for the oppressed and the oppressor, for Mark Driscoll and for all those he has hurt. If we Christians have now arrived at a point where grace has run dry or is only available to some, let us abandon this whole Jesus way and join those who have no hope.

I’m a tough critic–perhaps too tough on occasion. But this situation has reminded me that the Christian community must be as generous with the salve of forgiveness as we are with the acid of criticism. If we can learn this, we will take a step closer to walking as Jesus did. And maybe then we can, with the dearly departed Brennan Manning, dare to whisper the ragamuffin’s rumor: