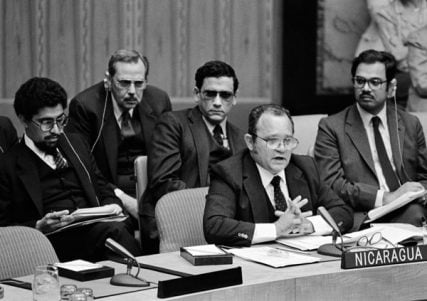 The Rev. Miguel D’Escoto Brockman, then minister of foreign affairs of Nicaragua, addresses the Security Council on May 9, 1983. Photo courtesy of United Nations

VATICAN CITY (RNS) Continuing a bid to revive a movement that was sidelined by his predecessors, Pope Francis has reinstated a Central American priest who was suspended by the Vatican in the 1980s for his involvement in the political activities of Nicaragua’s leftist Sandinista movement.

The Rev. Miguel D’Escoto Brockman, 81, was suspended from his duties by St. John Paul II and recently wrote to Francis asking for that order to be revoked so he could celebrate Mass again before he died.

D’Escoto and three other dissident priests were suspended in 1985 for defying a church ban on clergy holding government jobs. The Sandinistas, who supported the “popular church” of liberation theology, overthrew the pro-American regime of Anastasio Somoza in 1979. D’Escoto served as Nicaragua’s foreign minister from 1979 to 1990.

The Vatican announced Monday (Aug. 4) that Francis had agreed to the priest’s request to lift the 29-year suspension and asked D’Escoto’s superior in the Maryknoll order to help reintroduce him to priestly ministry.

Maryknoll Fathers and Brothers confirmed in a statement that the pope had agreed to remove “the canonical censure inflicted upon him,” and approved his reintegration and resumption of his priestly duties.

The move is likely to provoke fresh debate about Francis’ own political stance since he has been criticized by conservative American commentators for having a “Marxist” political perspective on international finance and capitalism.

Then president of the General Assembly, the Rev. Miguel D’Escoto Brockmann, holds a press conference to launch the 2009 Trade and Development Report. Photo courtesy of United Nations

The sanction was also a reflection of John Paul’s broader crackdown on liberation theology in Latin America.

“During the 1970s, Father d’Escoto became engaged in politics in Nicaragua,” the Maryknoll statement said. “He joined the Sandinista National Liberation Front, a political party that overthrew Anastasio Somoza Debayle and established a revolutionary government.

“For his political actions, involvement in the Sandinista government and failing to resign from a political office held in violation of his ministry, Father d’Escoto was suspended from his priestly duties by the Vatican.”

D’Escoto was ordained a Roman Catholic priest in 1961. He helped found Orbis Books, the theological publication division of Maryknoll, and he was an official with the World Council of Churches.

From September 2008 through September 2009, he presided over the 63rd session of the U.N. General Assembly as its president.