Raif Badawi champions freedom of religion, belief, expression and women’s rights in Saudi Arabia, a country where none of these rights exist. 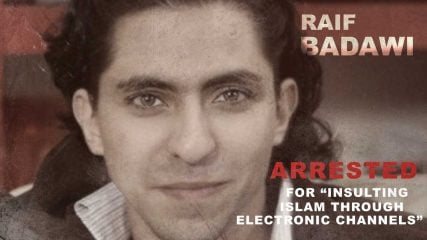 I’ve written before about Saudi’s insanity when it comes to suppressing fundamental freedoms. If anything, Badawi’s case shows that things are getting worse.

In 2008, Badawi was detained and questioned on charges of apostasy, a crime in 20 countries and one punishable by death in 13, Saudi included. That time he was released. But in 2012 he was arrested and formally charged with apostasy and “insulting Islam” for starting Liberal Saudi Network, a website that hosted content critical of the state religion.

In 2013 he was sentenced to seven years in jail and 600 lashes for “insulting Islam through electronic channels.” Badawi’s lawyer successfully appealed the sentence, but earlier this year a criminal court upped the punishment to 10 years in prison, 1,000 public lashes, a 20-year travel ban and a fine of more than $250,000, adding insult to insult to injury to injury. The court also jailed Badawi’s lawyer for human rights activism*, AKA doing his job.

Badawi’s 20 rounds of public lashings are set to begin in the coming weeks in front of a Jeddah mosque after Friday prayers.

Hold up a minute.

Despite more than a decade of attempts to push through anti-blasphemy/anti-defamation of religion resolutions at the U.N., no such protections exist at the international level. Know what rights are enshrined in the U.N. Declaration of Human Rights and elsewhere? The freedom of thought, conscience and religion, the freedom to publicly and privately manifest beliefs, the freedom to change or to drop those beliefs, the freedom of opinion and expression. These rights necessarily include the freedom to blaspheme and to apostatize.

You’d think that Saudi, which now sits on the U.N. Human Rights Council, might have read the U.N. Declaration of Human Rights. You’d think the same of fellow UNHRC members China, Russia, Kuwait, Pakistan and honorary members Genghis Khan, Satan and Hitler (kidding, barely), but I’m not convinced they have. Saudi abstained from adopting the declaration in 1948 and never signed nor ratified the International Covenant on Civil and Political Rights.

Saudi has such little respect for Articles 19 of both documents, which protect freedom of expression, that a country rep shouted down the Center for Inquiry not one, not two, but three times -- thrice! -- when it brought up the country’s dismal human rights record at a UNHRC meeting in Geneva in June.

I’d say the whole country is drunk, but booze is banned under Sharia law, so that theory falls flat.

A more likely explanation is that Saudi suppresses religious and political dissent to maintain control. Rights and freedoms are great for individuals and societies, but they’re a pain in the neck for authoritarian governments.

Saudi’s normalized position on the world stage and Rafi Badawi’s plight represent the tragedy that can and does ensue when international economic and political considerations overshadow fundamental human rights.

This International Blasphemy Rights Day, let’s sound our dissent at the gross mistreatment Badawi and other dissenters face around the world. These victims of conscience are victims of outdated blasphemy, apostasy and defamation of religion laws, present in nearly half the world’s countries, that exist to protect established power structures rather than actual people.

You can help Raif Badawi by sending an appeal to these and these Saudi officials by October 13.

*According to Amnesty International, Badawi’s lawyer Waleed Abu al-Khair was was found guilty of “disobeying the ruler and seeking to remove his legitimacy”, “insulting the judiciary and questioning the integrity of judges”, “setting up an unlicensed organization”, “harming the reputation of the state by communicating with international organizations” and “preparing, storing and sending information that harms public order”.