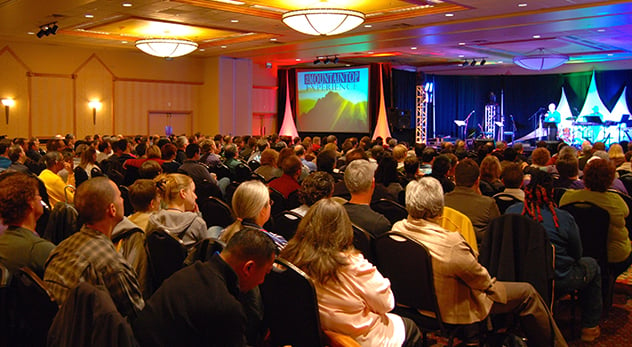 A crowd shot from the GCN conference in 2010. This year, they expect double the number of 2013 attendees. – Image courtesy of the Gay Christian Network

As debates over sexuality and marriage continue to heat up among American Christians, several groups have decided to convene what a Southerner might call a “Come to Jesus meeting.” Three Christian organizations will host conferences during the next three months representing the wide spectrum of views among believers.

Today, the Ethics and Religious Liberty Commission (ERLC) of the Southern Baptist Convention becomes the first off the block with the commencement of their national conference in Nashville, Tennessee. The ERLC is one of the leading organizations promoting the traditional Christian understanding of sexuality and marriage. They have 45 speakers scheduled to address their gathering, and have welcomed many prominent pro-gay advocates to attend the conference as well. It should create much conversation across social media. (Those who aren’t attending the event can live stream it here.)

Next month, The Reformation Project will host their event in Washington, D.C. to promote the full affirmation of same-sex relationships. (David Gushee, a leading evangelical ethicist, plans to publicly announce his support of LGBT relationships at the event.) And in January, the Gay Christian Network will host a conference in Portland, Oregon that they claim takes more of a “third way” by welcoming perspectives of affirming Christians and those who believe faithfulness requires celibacy for LGBT persons.

Below is a sketch of each conference with a short statement from the leader of the host organization describing the event’s goal in their own words.

“We wish to equip churches to engage a culture where we must articulate, and not just assume everybody understands, what we mean by marriage and family and sexuality. We want to discuss these issues in the context of the gospel, which means we speak clearly both in terms of sin and of mercy, of truth and of grace. And we want not merely to equip churches to articulate a Christian sexual ethic but to embody that ethic in healthy, gospel-reflecting marriage cultures that reflect the union of Christ and his church.”
– Russell Moore, President of the Ethics and Religious Liberty Commission

“The conference is primarily a Bible-based training event for Christians who are LGBT-affirming but who want and need the biblical tools in order to be able to go back to their pastors, their parents, their colleagues, and say, ‘I don’t just feel this way in my heart, but I can actually defend my beliefs from a Bible-based standpoint, and I’m not giving up on the authority of Scripture.'”
– Matthew Vines, Founder of The Reformation Project

“The annual Gay Christian Network conference is the only major conference where both sides of the sexuality controversy have a voice. Many groups preach to their own choirs and try to outshout the opposition, but we provide a unique, grace-filled space for Christians to meet one another, worship together, and work collectively to create a stronger, more compassionate church for all in spite of our disagreements.”
– Justin Lee, Executive Director of the Gay Christian Network

*These numbers were provided to RNS by the conference last week and may have changed.