(RNS) The Vatican will host religious leaders from across the religious spectrum later this month for a conference where they are expected to defend traditional marriage as between a man and a woman. 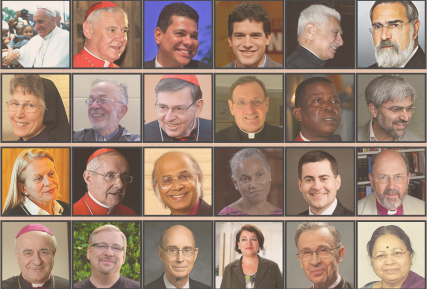 The speakers planned for a Vatican conference on the family.

While hosted by Vatican officials and scheduled to open with an address by Pope Francis, the conference will include Muslim and Jewish representatives, as well as American leading evangelicals like megachurch pastor Rick Warren and Southern Baptist ethicist Russell Moore.

The gathering comes just weeks after Pope Francis and senior Catholic leaders wrapped up a two-week Vatican Synod on the Family, which highlighted tensions within the Catholic hierarchy over gays and lesbians and cohabiting couples.

Despite initial overtures toward gay and lesbian Catholics and the “gifts and qualities” they had to offer the church, the final synod report scaled back that language. Conservative and traditionalist Catholics said any attempts to soften the church’s teaching on homosexuality was a “betrayal” and akin to heresy.

Organizers say the new conference will show that while the Catholic hierarchy is split on how to address contemporary challenges to marriage and family life, the church can nonetheless seek common ground with religious leaders outside the Vatican.

“I am willing to go anywhere, when asked, to bear witness to what we as evangelical Protestants believe about marriage and the gospel, especially in times in which marriage is culturally imperiled,” said Moore, who heads the Southern Baptist Convention’s Ethics and Religious Liberty Commission.

The Nov. 17-19 conference, “An International Interreligious Colloquium on The Complementarity of Man and Woman,” will feature about 30 speakers from 23 countries and 14 religions.

The conference has been in the works for at least a year, said Helen Alvare, a law professor at George Mason University who is handling communications for the gathering. But the Vatican’s blockbuster family summit laid a good foundation for a larger discussion, she said.

“The drive we have for new language is a huge part of this,” Alvare said. “People fear complementarity means women are second, and their fears are somewhat justified. There’s a need to educate, to inspire, to show and tell about the beauty of the relationship between men and women.”

Cohabitation, nonmarital parenting and same-sex marriage are dominating the global conversation on the family, Alvare said.

“Same-sex marriage takes up a great deal of oxygen,” she said. “It’s a controversial question that’s going to be out there. Positive stories are difficult. But I’m hopeful because I’ve seen that with the work with Pope Francis.”

The conference will include Wael Farouq, a Muslim and president of the Tawasul Cultural Center in Cairo; Henry B. Eyring, a top-ranking apostle in the Church of Jesus Christ of Latter-day Saints; and Manmohan Singh of the World Sikh Council.

“Marriage is your personal project, but it effects the world,” Alvare said. “The message is aimed at those who are there, that those in their own religious traditions and societies can have more language to work with and also that they have more hope.”