Biologos is a pro-evolution Christian advocacy group. They are a lightning rod of criticism, most recently from WORLD Magazine. – Image courtesy of BioLogos (http://bit.ly/11eUw9h)

The evangelical WORLD Magazine is increasingly known for targeting fellow Christians. This week, they took aim at the pro-evolution Christian advocacy group BioLogos.

After attending a BioLogos gathering at the Harvard Club in New York City, WORLD writer Warren Cole Smith lamented that the event only featured speakers presenting arguments in favor of evolution—a theory almost universally accepted among scientists—and how it is compatible with the Bible. In a column titled, “Unscientific Method,” he mourned that anti-evolution perspectives were “strikingly absent” at the gathering.

“Doesn’t the scientific method include presenting theories to skeptics so the theories can be confirmed, refuted, or made better?” Smith asked.

But Smith’s question raises an even better one: “Why do evangelicals hold such blatant double-standards when it comes to public debate?”

Does WORLD also believe that Reformed theology conferences should give stage time to those who oppose Calvinism? I assume not. Do they think that complementarian Christian conferences should invite speakers who support gender equality? Doubtful. Would they expect that conservative evangelicals invite pro-gay Christians to conferences on marriage and sexuality? No way. 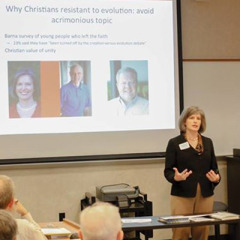 Or—for a closer analogy—what about the pro-creationist organization Answers in Genesis (AIG)? They host numerous conferences where not a single evolutionist is offered a chance to give the opposing side. Is WORLD concerned that AIG “excludes its most prominent critics from the dialogue?”

WORLD makes no bones about the fact they are doing journalism with particular assumptions and not giving every side a voice. The magazine employs “mostly evangelical Protestants.” They make no effort to fill their newsroom with atheists or even good ole’ Episcopalians who smell of incense and liberalism. No, they are very open about writing from a single perspective: a conservative evangelical one.

WORLD editor-in-chief Marvin Olasky has rejected on numerous occasions that journalists should present two sides as equally valid and let readers decide. When it comes to many issues, Olasky has said, “the Bible is very clear, so we are not going to be even-handed in the sense of balancing of subjectivities, which is what ‘objectivity’ often came down to.”

So when WORLD believes that an issue has been clearly settled, they can ignore “prominent critics.” On the other hand, a group of Christian scientists and theologians is suspect for behaving likewise when they believe an issue is clearly settled. Got it.

Having penned a regular column for nearly two years, I’ve run into this type of evangelical inconsistency so many times that I’m surprised I have any hair left to pull out. Most critics don’t seem to realize that an opinion columnist is paid to have a point of view and doesn’t pretend to be an objective purveyor of the facts. At times, I present both sides because I think it is important to the kind of discussion I want to curate, but I’m not required to.

Luckily, most evangelical readers don’t expect me to behave like an evenhanded reporter . . . when they agree with my perspective, that is. When they disagree, however, they claim that I have unethically stacked the deck. If I’ve learned anything from fielding criticisms these many months it is that [tweetable]when an evangelical accuses a journalist of “bias,” he or she usually means, “I don’t like what you’ve said.”[/tweetable]

In February, for example, I questioned the efficacy of state legislation allowing Christian vendors to discriminate against LGBT persons. During the dust-up, Russell Moore of the Ethics and Religious Liberty Commission and I found ourselves on opposite sides of the debate. He penned a blog post arguing his perspective, not giving voice to the opposition. I responded with a column drawing from a range of evangelical theologians who disagreed with his perspective.

After my piece published, I received a searing email from a conservative evangelical leader saying, “Not a very objective article. You only cite those who agree with you. It would at least further healthy, balanced, and respectful dialogue if you also cite those who disagree.”

I responded, “Do you also apply this standard to others who agree with you? Russell Moore does not provide a single line of quotes from the other side [in his article on the matter]. Did you offer him the same advice? If not, can you please explain to me why I continue to encounter such blatant double standards when it comes to expectations on how to write a column?”

His response: “I wrote to express concerns, not to argue. I appreciate you sharing your perspective.” Translation of his response: “No, I didn’t. I only applied those standards to you because I disagree with you.”

The prevailing evangelical perspective on fairness and balance of perspectives in public debates is simple:

With such a squishy and subjective view of objectivity, no wonder sociologist Alan Wolfe has concluded, “Of all America’s religious traditions, evangelical Protestantism, at least in its twentieth-century conservative forms, has ranked dead last in intellectual stature.”

I too attended the BioLogos gathering. The organization clearly stated its aim to “present an evolutionary understanding of God’s creation,” and they delivered on it. I had no problem with BioLogos presenting a single view on the topic. And I have no issue with Answers in Genesis or any other organization presenting a single view at their conferences either. Sure, it can beneficial for both sides of a debate to be heard in tandem, but that isn’t the way public debates often work.

If evangelicals want to attack BioLogos for hosting a one-sided event, they should apply the same standard when the perspective presented aligns with their own. Unless, of course, they wish to draw charges of hypocrisy. [tweetable]The sword of one’s arguments is always double-sided even if our standards shouldn’t be.[/tweetable]