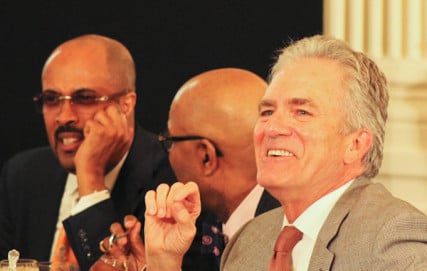 (RNS) Like much of the pre-Christmas hype that used to come only after Thanksgiving, cries of a “War on Christmas” began early this year.

This time,  public school policies concerning religious holidays got caught in the crosshairs. Charges have been leveled in response to the Montgomery County, Md., Board of Education’s vote (7-1) to remove any mention of religious holidays on days that school is out. The action came after a complaint from a Muslim group that its holidays were not recognized as an occasion for school closure.

We live in a country that rightly prevents government endorsement of religion while protecting religious exercise. Indeed, public schools must accommodate the religious needs of the students without advancing religion itself.

In this spirit, the following policy guideline on excused absences for religious reasons was endorsed several decades ago by a slew of education and religious groups, including the Baptist Joint Committee for Religious Liberty, and has enjoyed the widespread approval and acceptance by school officials and religious liberty advocates alike:

“Sensitive school policy on absences will take account of the religious needs and requirements of students. Students should be allowed a reasonable number of excused absences, without penalties, to observe religious holidays within their traditions. Students may be asked to complete make-up assignments or examinations in conjunction with such absences.”

The schools’ first act of accommodation should be a generous excusal policy for individual students wishing to be absent from school to celebrate a religious holiday.

Although public schools must not recognize religious holidays or call off school for religious reasons, they may mandate districtwide closures when religious excusals reach a critical mass and the school day would be seriously disrupted by widespread absenteeism. This would be a matter of administrative convenience — a proper secular purpose — not an endorsement of any religion or religious holiday.

I appreciate the difficult task of negotiating this principle in Montgomery County, the nation’s 17th-largest school system, with more than 153,000 students in the suburbs north of the District of Columbia and a dizzying multiethnic and religiously plural student and teacher population. Yes, at some point, school officials have to draw a line lest the accommodation of religious holidays swallows up the school year. The answer for Montgomery County, at least for now, may be to extend a generous excusal policy to the Muslim population. But, the county’s refusal to identify the religious reason for the days off does not solve the problem and only invites unfounded criticism of hostility to Christmas and the other religious holidays.

The policy adopted in Montgomery County — while misguided — should not be interpreted as an act of hostility toward Christmas or other religious holidays, any more than saying “Happy Holidays” or “Seasons Greetings” to someone in any way disparages Christmas or diminishes our enjoyment of it.

While we do not want the public school systems promoting religious holidays, they should be sensitive in accommodating the religious needs of students, including generous excusals allowing them to celebrate those holidays. What we certainly do not need is a purity police criticizing efforts to respect and negotiate religious diversity in the public schools by fabricating baseless charges of a War on Christmas.

(J. Brent Walker is executive director of the Baptist Joint Committee for Religious Liberty in Washington, D.C. He is both an ordained minister and a member of the U.S. Supreme Court Bar.)

Opinion
Nike, don’t make me choose between Liverpool FC and the Uighurs
Opinion
Abraham would be proud
News
New York City Muslims work to build food security during Ramadan
News
Indonesian Muslims brace for somber Ramadan amid pandemic restrictions
Home Top Three
Virus prompts churches meeting in schools to find new ways to preach, pray
© Copyright 2020, Religion News Service. All rights reserved. Use of and/or registration on any portion of this site constitutes acceptance of our User Agreement and Privacy Policy, Privacy Statement and Cookie Notice. The material on this site may not be reproduced, distributed, transmitted, cached or otherwise used, except with the prior written permission of Religion News Service.