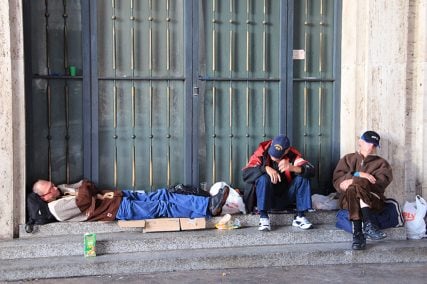 Just one month after announcing plans to build showers for the homeless in St. Peter’s Square, the pope called for 400 sleeping bags with the papal ensign to be distributed to people living on the streets.

Konrad Krajewski, the Polish archbishop known as the pope’s almsgiver in charge of his charity work, led the volunteers Wednesday night on a minibus tour around St. Peter’s Basilica and the Italian capital.

“This is a gift for you from the pope on the occasion of his birthday,” volunteers, including nuns and members of the Swiss Guard, told the recipients during the operation.

Earlier in the day, the Argentine pontiff was serenaded by hundreds of couples who danced a mass tango, one of his favorites, in St. Peter’s Square. Well-wishers presented him with a birthday cake and mate, the popular Argentine drink, too.

Francis has made concern for the poor one of the defining themes of his papacy and has spoken out about the need to fight global hunger and poverty.

He has handed out cash to the homeless in Rome and recently called for showers to be constructed inside the public restrooms next to St. Peter’s Basilica.

Three showers are being built in a refurbishment of the restrooms provided for Catholic pilgrims beside the columns leading into the basilica, which was completed in 1626.