VATICAN CITY (RNS) In his latest bid to ease the suffering of the poor — and upend the expectations of the papacy — Pope Francis plans to build showers for the homeless under the sweeping white colonnade of St. Peter’s Square. 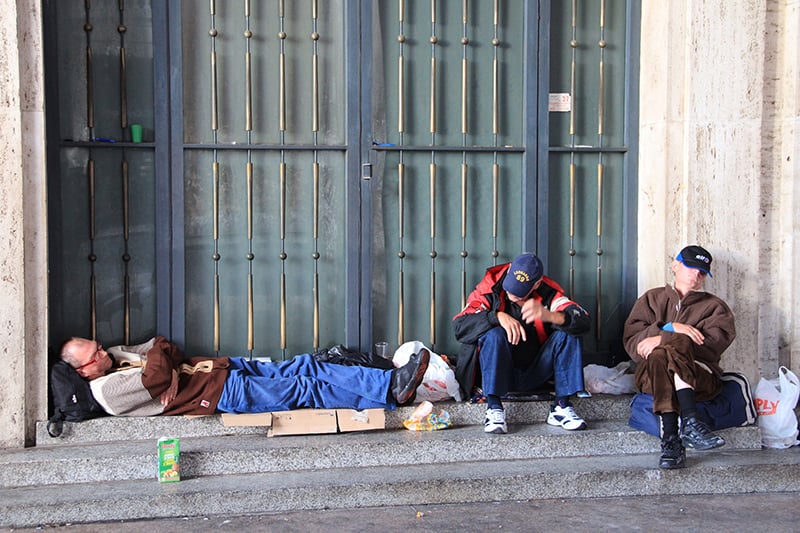 Three showers are to be built into refurbished public restrooms provided for Catholic pilgrims along the marble columns leading into the historic basilica, which was completed in 1626.

The Vatican’s deputy spokesman, the Rev. Ciro Benedettini, said Thursday (Nov. 13) that the project was a joint initiative of the pope and Archbishop Konrad Krajewski, the papal almoner who distributes charity on the pope’s behalf. Construction is due to begin next week (Nov. 17).

It’s an unconventional move, even for a pope who constantly preaches that more should be done to help the poor. It also could rankle traditionalists as the homeless line up to wash beneath the extravagant apostolic apartments that Francis shunned after his election.

“I think it’s a good thing,” said Adrian Sztrajt, a 27-year-old homeless man from the Polish city of Chelm. “I would like to go for showers there.”

Sztrajt and his companion Grzegorz Bialas, also from Poland, sleep with half a dozen others under the porticoes in front of the Vatican press office beside St. Peter’s Square.

Bialas said he’s a fan of the pope but thinks the showers are “a bad idea” since they could attract hundreds of homeless to the Vatican. He also said it was possible for the homeless to get a shower elsewhere in Rome.

Dariusz Puszkarz, a construction worker from Gdansk, said the showers were less important than finding work. He said he was fed up with the priests and cardinals who walked past their group every day without stopping to help them.

“They don’t do anything,” he said in Polish through an interpreter. “They think we don’t want to work. Because we drink, everyone thinks we are alcoholics. No one says there is work for you.”

The Italian daily La Stampa reported Thursday that Krajewski had pressed for the showers to be built after he met a homeless man called Franco in October.

When he learned it was Franco’s 50th birthday, he had invited him for dinner. But the man said he was too embarrassed because of his body odor while complaining there were no toilet or wash facilities around the Vatican. A homeless man sits under the right colonnade, close to where the showers are going to be built in St. Peter’s square at the Vatican, on Thursday (Nov. 13, 2014). Religion News Service photo by Josephine McKenna

Krajewski, who is also Polish, was not available for comment. He told La Stampa’s Vatican Insider that he had visited 10 parishes in Rome where the homeless gather and asked them to install shower facilities. He said he tells parish priests: “The Holy Father is paying!”

The Community of Sant’Egidio, a Catholic charity that helps Rome’s homeless, also publishes a handbook, titled “Where to eat, sleep and wash,” in several languages.

“It is not simple, because it is easier to make sandwiches than run a shower service,” Krajewski said. “We need volunteers, towels, underwear.”

But Catholic charity is unlikely to stop there. Next on Krajewski’s list is haircuts. He said he has asked a local hairdressing school if students may be available to give haircuts to pilgrims without a home.