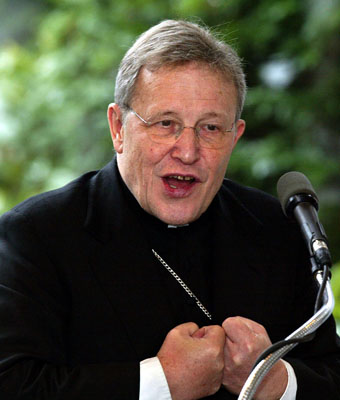 Cardinal Walter Kasper, one of Pope Francis’ closest advisers, has sought to downplay the pontiff’s scathing critique of the Curia earlier this week. Photo by Julia Malakie

VATICAN CITY (RNS) Cardinal Walter Kasper, one of Pope Francis’ closest advisers, has sought to downplay the pontiff’s scathing critique of the Curia earlier this week.

Kasper, who previously led the Vatican body responsible for promoting Christian unity, said the pope was asking the Curia, or Vatican administration, to examine their conscience in a bid to promote spiritual renewal.

The German cardinal, joined by Argentine Cardinal Leonardo Sandri, said Francis was asking the Curia to set an example.

“The fundamental thing is he wants spiritual reform of the Curia,” Kasper told the Italian daily Corriere della Sera on Wednesday (Dec. 24).

“Certainly also reform of the structures is important and he is working on that. But the basis of the problem is spiritual.”

The pope announced what he termed 15 illnesses affecting the Curia at his Christmas greetings on Monday, including “spiritual Alzheimer’s” and gossipy cliques.

Francis said too many suffered from careerism, hypocrisy and back-stabbing, referring to ailments including “existential schizophrenia,” and the “terrorism of gossip.”

Kasper said the pope was like “a Jesuit spiritual guide” and wanted senior clerics to reactivate their “evangelical spirit.”

Sandri, who was also quoted in the Italian daily, said Francis told him that prelates should recall “the austerity of life” and “evangelical ideals.”

Sandri said the Curia had to be “a model for living, not a topic of scandal that creates upset or, even worse, incredulity.”

Criticism of the Vatican bureaucracy is not new. The final months of Benedict XVI’s papacy were shrouded in scandal after his personal butler Paolo Gabriele leaked confidential documents to the media about discord in the Vatican in the so-called Vatileaks scandal.