I am very grateful for this thought provoking guest post and hope it challenges each of us to re-examine how we approach the value of life.  Robert Peters is both my student and my friend, and he gives me much hope for the next generation.  - Boz

I will never forget the first ultrasound of my unborn child. Expecting an idle smudge on a grainy screen, my wife and I were greeted by a hyperactive baby, all four flailing limbs foiling the doctor's attempt at accurate measurement. Our child was beautiful, and very much alive.

This week marks the 42nd anniversary of Roe v. Wade, and across the country pro-lifers gather to profess the humanity of unborn children. However, as Brennan Manning noted in The Ragamuffin Gospel, "the danger of the pro-life position... is that it can be frighteningly selective." Recent events provide repeated and disturbing evidence of this selectivity. 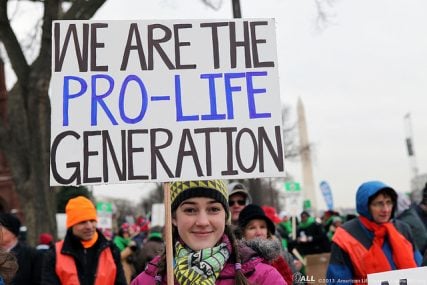 For example, the Internet is littered with conservatives decrying the abortion of children conceived through rape, yet many of these same conservatives minimize, ignore, and otherwise dehumanize the rape survivors themselves.

We see this in the popular conservative blogger who glibly dismisses the prevalence of sexual assault with an unrelated hyperlink and the question, "Does any rational person really believe that the numbers are this high?" We see this in the perverse portrayal of those who condemn Cosby as "liberals" who, of course, whole-heartedly endorse Clinton's sexual conduct. We see this in the many Christian institutions that publicly proclaim a pro-life ethic, while actively marginalizing abuse survivors and concealing predators. We see this in repeated incredulity towards abuse allegations, shackling victims in the shadows. We see this in the calloused right-wing pundits who dismiss rape survivors as little girls in need of attention. We see this in the culture warrior who only mentions child abuse if a homosexual is involved.

There is a common thread: a dehumanizing prioritization of partisanship over people, of political platforms over Biblical principles. Mark 12 lists the two greatest commandments: love God and love people. That's it. No partisan talking points: just the simple command to love others as we love ourselves. How we treat "the least of these" is how we treat Christ (Matthew 25:40).  God created man in His image (Genesis 1:27). Life is sacred, precious, and beautiful. If you ignore or exploit rape allegations to score political points, you demean the image of God. You're not pro-life.

All too often we see the same dehumanizing lack of empathy in the context of racial issues. Regardless of one's perspective on recent police-related killings, humanity must be unconditionally affirmed. It is intolerable that "pro-lifers" express their support of law enforcement by posting "I Can Breathe Because I Obey The Law."

In the first place, this slogan is simply incorrect. Civil liberties attorney Harvey Silverglate wrote the book Three Felonies a Day, which is the estimated number of crimes committed by the average American due to the rise of the administrative state and vague drafting. Thankfully, those broadcasting their moral superiority have not yet been choked to death for their extensive criminal activity.

This pesky reality will not deter many conservatives from persisting in their own misplaced self-righteousness. They fail to acknowledge a world filled with tragedy, injustice, and sin, regardless of political party or ideology. Thus whenever tragedy occurs, they find some way to blame the victim: Did they commit a crime? How were they dressed? Did they do something objectionable that makes us feel better about their demise?

This is simply un-Biblical; all our righteous acts are like filthy rags. (Isaiah 64:6) God's grace is the sole cause of any blessing; without Christ we can do nothing. (John 15:5)

Why, then, are we so eager to demean the departed? Where is the Biblical concern for those suffering, regardless of culpability? In the wake of Eric Garner's death and the killing of two NYPD officers, MaleSurvivor Executive Director Christopher Anderson's response was poignant: "If you feel that you cannot offer the same compassion to the human beings on both sides of a protest line, you are part of the problem, and not the solution."

Why is life so expendable? Why do we tirelessly fight for the unborn, but discard the life (and worth) of a father if he sells a cigarette and says "Do not touch me"?

I weep at the killing of Eric Garner and the execution of NYPD officers. I weep at the ignorant dismissal of rape survivors for partisan or institutional gain. I weep at the precious movements of my unborn child.

All for the same reason: I am pro-life.

Robert Peters is a law clerk with the United States Attorney’s Office and a third year law student at Liberty University School of Law. He lives in Virginia with his wife and they are expecting their first child in July.  You can follow Robert at  @The BobbyPeters