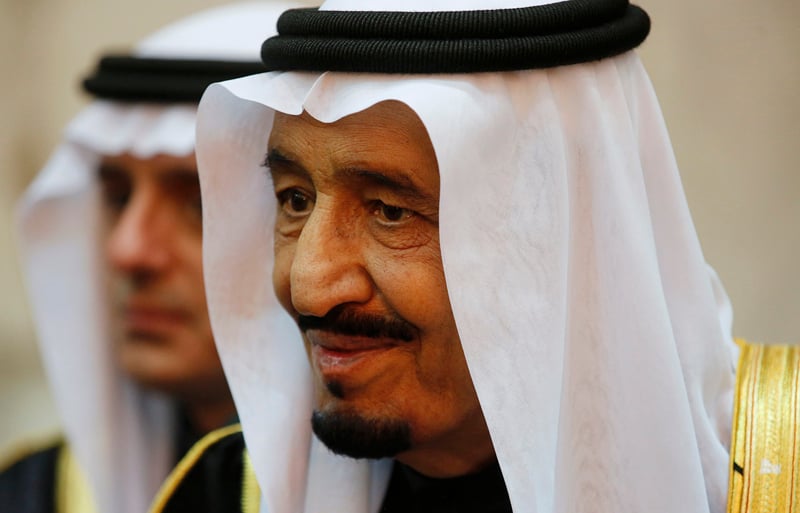 Saudi Arabia’s King Salman is seen during President Barack Obama’s visit to Erga Palace in Riyadh on Tuesday (January 27, 2015). Photo courtesy of REUTERS/Jim Bourg
*Note: This photo my only be republished with RNS-SAUDI-KING, originally published on January 27, 2015

(RNS) Saudi Arabia’s King Salman, who took the helm of the world’s last absolute monarchy Friday, faces turbulence at home and abroad but is unlikely to change the course set by his predecessors.

“We will continue adhering to the correct policies which Saudi Arabia has followed since its establishment,” the king said in his first speech after succeeding his half-brother, King Abdullah bin Abdul Aziz, who died early Friday at the age of 90.

Salman, 79, was serving as defense minister when Saudi Arabia joined U.S.-led airstrikes against the Islamic State. During his tenure, Saudi forces in the south came under attack by Houthi rebels in Yemen. The Houthis, now the dominant military and political force in Yemen, are backed by Saudi Arabia’s main rival and greatest threat in the region — Iran.

On Friday (Jan. 23), Salman called for unity among Arab and Islamic nations in a clear response to the unrest fomented by the rise of the Islamic State in large parts of Syria and Iraq. “The Arab and the Islamic nations are in dire need of solidarity and cohesion,” he said.

U.S. diplomats had a good relationship with Salman even before he became minister of defense and crown prince. Salman served for five decades as governor of Riyadh, the nation’s capital and diplomatic center. His health has been a question of concern after he suffered a stroke that left him with limited movement on his left arm.

The former defense minister has sought to bring slow change to one of the most conservative nations on earth. Saudi Arabia’s religious authorities, who control the judiciary, preach adherence to an interpretation of Islam that prohibits women from driving and punishes homosexuality with death.

“Like King Abdullah, he has strong backing of the religious community and has a bent for modernization,” said James Smith, who served as U.S. ambassador to the kingdom from 2009 to 2013. “The question is if he can articulate it as well and communicate it to the population.”

Some Saudi watchers, such as analyst David Weinberg at the Foundation for Defense of Democracy, say the country has turned away from reform, especially since the Arab Spring uprisings of 2011.

Crackdowns on government critics, women’s activists, perceived sorcerers and witches, as well as violent extremists were conducted by the Ministry of Interior, headed by the man Salman appointed to be second in line to succeed him, Muhammed bin Nayef, Weinberg said.

Among bin Nayef’s victims: Blogger Raif Badawi, who wrote that Imam Muhammad ibn Saud Islamic University in Riyadh had become “a den for terrorists,” was convicted of insulting Islam and sentenced to 1,000 lashes, 10 years in prison and a fine.

Bin Nayef has also dealt with Islamist extremists with an iron hand in some ways, but his terrorist rehabilitation program does not challenge extremists’ hatred of other religions, and results in “a very large number (who) return to violence,” Weinberg said.

The Saudis estimate the program’s recidivism rate at 12 to 20 percent, which they consider acceptable because repeat offenders are dealt with harshly, Smith said.

Salman and Crown Prince Muqrin, the second in command, are both sons of the founder of the modern Saudi state, Abdulaziz Al Saud. According to the succession plan, Bin Nayef will be the first of Abdulaziz’s grandsons to become king, said Bruce Riedel, a 30-year veteran of the CIA who is now at the Brookings Institution in Washington.