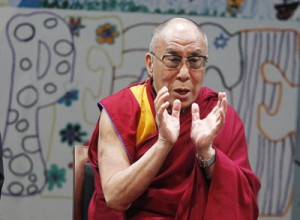 The Dalai Lama speaks in 2011 at the Newark Peace Education Summit in Newark, N.J., where Nobel laureates compared different visions of nonviolence and reconciliation. Photo by Robert Sciarrino/The Star-Ledger.

BEIJING (RNS) China warned the United States on Monday (Feb. 2)  that it was opposed to any country meeting the Dalai Lama “in any manner” after the White House said U.S. President Barack Obama would attend an event with the exiled Tibetan spiritual leader whom Beijing brands a separatist.

The White House said last week that Obama would deliver remarks at a Feb. 5 prayer breakfast in Washington about the importance of religious freedom. The Dalai Lama is due to attend.

“China is opposed to any nation or government using the Tibet issue to interfere in China’s domestic affairs, and opposed to any country’s leader meeting with the Dalai Lama in any manner,” Chinese Foreign Ministry spokesman Hong Lei said at a daily news briefing.

“China hopes the U.S. side abides by its promises on the Tibet issue, and proceeds to appropriately handle the issue on the basis of the overall condition of bilateral relations.”

The White House, which said Obama had a “great relationship” with the Dalai Lama, did not announce any specific meeting between the two.

Obama held his third meeting with the Dalai Lama in Washington last February, infuriating Beijing, which denounces the monk as a dangerous “splittist” seeking to establish an independent Tibet.

China is usually riled by politicians meeting the Dalai Lama. In 2012, British Prime Minister David Cameron had to put his trip to China on hold after Beijing took offense at him holding a meeting in London with the Dalai Lama.

The Nobel Peace Prize winner, who fled to India after a failed uprising against Chinese rule in 1959, says he simply wants autonomy for Tibet and denies espousing violence. Religion Hub
Tibetans in India demonstrate against Beijing Olympics
Follow us on Facebook!
Submit your photos to RNS