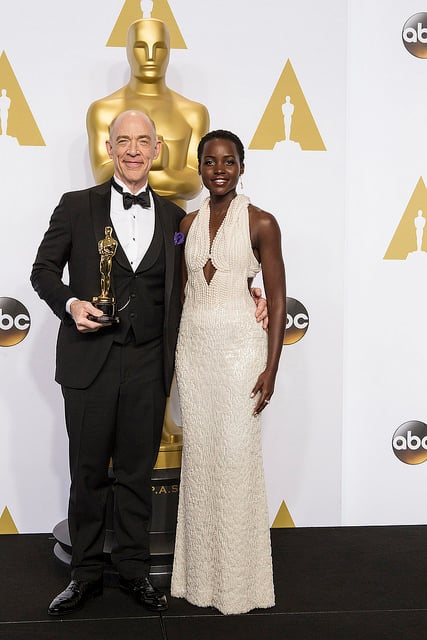 There ought to be a law that, every year, three celebrities are chosen at random to dress in the most surprising, awful, gaudy gowns possible. A sort of Oscars Hunger Games. At the very least, it would keep us all a little more interested in the red carpet (which has become so boring they've brought Khloe Kardashian on, and she can't even pronounce "Lanvin"). But think of all the great conversation we could have if someone showed up in a dress made of credit cards! Or a gown with bike shorts! Or a peasant number that made your boobs look like they were trying to escape from one another! Are all the worst Oscar moments consigned to the 1990s and early 2000s? Has our world of omnipresent cell phone cameras and online critics (Hmm...) made celebrities afraid to look dumb?

Probably. And that's why, some minor gaffes aside, no one really looked awful on this year's Oscars red carpet. But, someone needs to do the parsing, and no one else has yet written a blog post with the best and worst dressed Oscars attendees--oh wait, they have? I don't have to add my voice to the cacophony of critics who watched the show in their sweatpants?

But I must. Constitutionally, I cannot not write this post every year. So, tame as they may have been, let's take a look at the definitive*, objective**, completely unbiased*** list of best- and worst-dressed celebrities on the red carpet at the 2015 Oscars.

FIRST THINGS FIRST. I only want to talk about Lupita's dress--I generally could care less what the men are wearing, unless we're talking about the navy tux in which case I could talk for hours about how great it is--but I love this picture of her with JK Simmons. She won for Best Supporting Actress last year so, tradition goes, she presented the Best Supporting Actor award this year. JK Simmons is a fantastic actor, and if you haven't seen Oz you should really make that a priority, because he is wonderful and sadistic and terrible in it and I like to think it laid the necessary groundwork for his Oscar.

Enough about him, though, and his charming little face. Let's talk about Lupita, who wore a gown made of SIX THOUSAND PEARLS. Someone once wrote that Mr. Rochester would buy Jane Eyre a dress made of ten thousand pearls and she could wear it on the moon, and I think this is the closest thing we earthlings will every get to see. What other actress could pull off this dress? I'm hard-pressed to think of even one, honestly. The ivory color is positively regal on her--if Kate Middleton ever decides royal life is too much and goes back to party planning or buying for Topshop or whatever, Lupita could take her position without batting an eyelash. One of my favorite things about this dress is the top, how it looks at the same time like a shawl and a necklace. I couldn't tell what it was when I first saw her, just from the top, but it's gorgeous. I could live without the cutout underneath her boobs, but it's not the worst thing in the world, and the back is divine.

Do you think anyone tried to steal a pearl off the dress? Like a small one from the bottom that no one would notice? I feel like for sure John Travolta tried to do that. 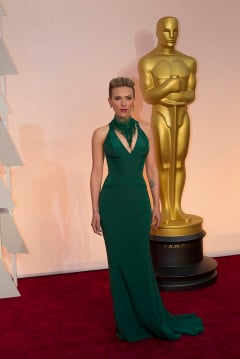 Speaking of Travolta, have you seen all these memes of him kissing Scarlett Johansson at the Oscars? I think my favorite is the one with Joe Biden. Either way, Travolta really established himself as Hollywood's Creepy Uncle at this year's Oscars, giving Scarlett a kiss on the red carpet and fondling Idina Menzel's face onstage. MAYBE, though, he was just trying to shield us mortals from seeing that ScarJo is actually Xenu, dictator of the galactic confederacy and head honcho of Scientology. Because really, why else would she have worn a necklace containing thousands of tiny thetans?

She is such a hit-or-miss red carpet dresser, to me, and this was a huge miss. Her dress also looked tight, like really uncomfortably tight. It looked like one of those dresses about which she will say, in later interviews, that she couldn't wait to get home and take it off and eat In-N-Out. She looks badass, like something out of Blade Runner, which isn't necessarily bad, but it's just not Oscars-friendly. She looks pissed and hungry, and I don't blame her! If John Travolta grabbed me and my dress was skintight, I'd feel the same way. The color is pretty, so at least there's that, and she wears that haircut really well. But overall, I wish she had worn literally anything else. 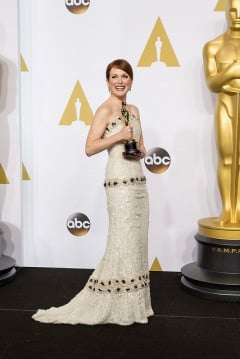 One of my favorites of the night was Julianne Moore's irridescent custom Karl Lagerfeld gown. This one had 80,000 sequins on it and, as I predicted, was just the thing to take home her statue in. I'm always on the lookout for redheads in flattering things (that should be a Tumblr if it isn't already), and I think this is just the thing. The length is lovely--quite formal, with the small train, but not poofy or princess-y. It's hard to get a good shade of white that looks good on redheads, because our skin tends to be so pale, but this is eminently flattering. The rosettes are perfectly placed (I love a good drop waist) and her updo adds to the elegance of the whole ensemble. I haven't seen Still Alice, the movie she won for, but this dress would have been good enough on its own to get her onstage. I love it. 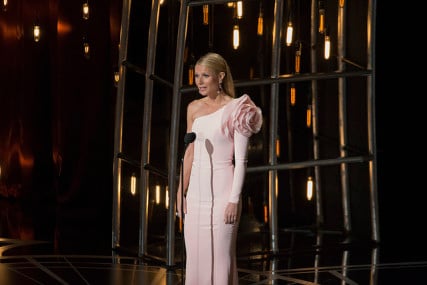 NEXT UP is Gwyneth. You already know my feelings about her. If you don't, just imagine maybe how you feel about your worst enemy, then scale it down a little bit because I don't really know her, but scale it up way more because come on we all know exactly what she's like, and then add another notch because her lifestyle brand is called Goop, and we have arrived, somewhat, at my level of distaste for all things Gwyneth. I could go on, but all I really want to do is remind you that Angelina Jolie wore basically the exact same dress a few years ago, and much better. Personal issues aside, this simply isn't an Oscars dress. The color is too light, and although it's better than the Ralph Lauren princess dress she wore in 1999, it's just altogether too casual. Although, what I will give her is excellent hair, a lithe bod, and a knack for picking out shapes (okay, not the shoulder flower) that look great on her. That's my act of generosity for the day. Speaking of generosity, Emma Stone came to the Oscars literally draped in gold. She matched the statue, which is often a form of wishful thinking that seems both sweet and a little desperate, not unlike Stone herself. I liked this dress on her at first, but the more I saw it, the more she looked...matronly? Yellow? Like a matronly, yellow lady? I like her so much in bold colors, and this wasn't hitting all the right notes. It's pretty, but it looks like something your stylish great aunt might have bought at Chico's to wear to the DAR gala, not something a 26 year-old nominee should wear to the biggest night of the year.

Plus, and this may just be this picture, but she's standing like she's trying to push her torso out in it. If she tilted her head back a few degrees she'd be in Mountain Pose backbend, which is a strange look for the red carpet. It's certainly not awful, but I have seen so much great stuff from her on the red carpet, and this misses the mark. 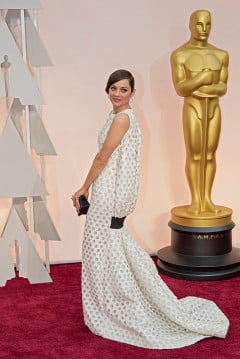 Next to Lupita, Marion Cotillard's dress may have been my favorite of the night. So many of the dresses were black (Sienna Miller) or white (Lupita) or black-and-white (Reese Witherspoon), but they were all sort of unique enough to be interesting (with the exception of Miller, who always just plays straight pretty on the red carpet). I am a sucker for a billowy dress back, and this won my heart instantly. The dress is Dior, since she swore a blood oath to them, and I hope she wears it all the time--at home, instead of a robe; to the gym, to lift tiny weights; out to dinner. It looks comfortable, like she could eat a meal and not look pregnant, but the delicate fabric and the volume and the black band and the train make it formal enough for the Oscars. It's perfect. 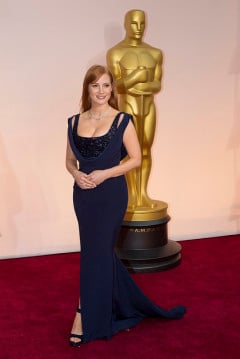 One dress that was decidedly NOT PERFECT was Jessica Chastain's. Which is sad, because I normally like her so much, and fellow redheads and all that, but it looked like a bedazzled onesie was trying to escape from what could have been a really pretty Oscars dress. This looks very Jessica Rabbit, and it's not just the cleavage. The color is nice on her, and I like the shape of the neckline, but it just doesn't look like her. We've seen so many interesting, fashion-forward dresses on her over the last few years, and this feels like something she got off the rack at the mall. She's handily this year's winner of the Jessica McClintock award, and I hope she takes that to heart and never makes this mistake again.

September 3, 2020
Related Posts
By Laura Turner
Oscars 2016: The S.S. Snoozefest
By David P. Gushee
From LeBron to Beyonce to Trump, we hold few heroes in common
By Laura Turner
A Bummer of an Oscars: Sean Penn, Terrence Howard, and green cards
By Sarah Pulliam Bailey
Here’s the faith in the ‘American Sniper’ you won’t see in the film
By Chris Stedman
The 10 most read 'Faitheist' stories of 2014