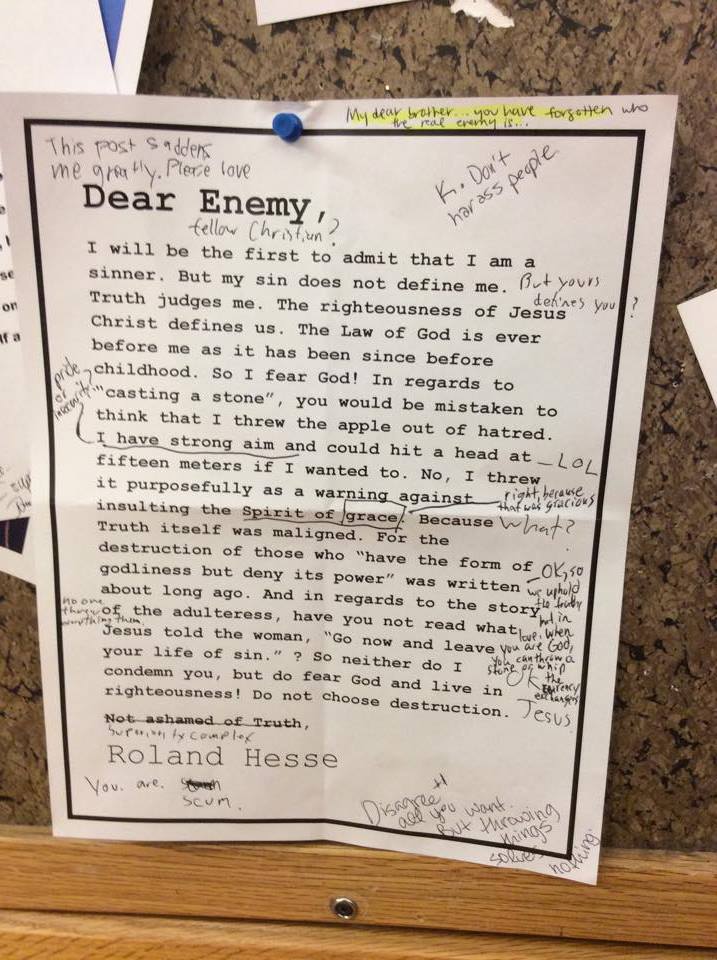 Editor's note: This piece has been revised to clarify the attribution and sourcing for the events at Wheaton.

On Monday morning, at a Town Hall chapel at Wheaton College turned sour after a student had an apple thrown at him. The annual Town Hall event is meant to host dialogue between the students and College President on subjects concerning the student body.

“Questions typically range from very playful to very serious, and are not screened in advance,” LaTonya Taylor, director of media relations at Wheaton College, told me in an email.

So it shouldn’t come as a surprise that questions on Wheaton’s tenuous relationship with LGBT students were asked.

But after student Philip Fillion asked about the relationship between Wheaton’s LGBT students and the college’s theological stance on same-sex relationships, another student pelted him in the back with an apple, he told me in an email.

What did Fillion, an ally of LGBT students, say that set off the apple? According to his email, he zeroed in on the College's required statement of faith (signed by faculty and staff) and the Community Covenant (signed by students)

Why, he asked, must all students and faculty agree – on threat of expulsion – to a set of statements that he said “…insists on formally condemning and denying equality to our gay and lesbian brothers and sisters, on spurious theological grounds, yet completely leaves behind baptism and Eucharist, which Jesus Christ himself instituted to grow and strengthen the Christian community?"

According to the students I talked to, the president responded skirting the question and reaffirming the stated position of the college.

Fillion’s question points to one that’s been bubbling under the surface of the Christian LGBT conversation for a while. It’s clear young evangelicals don’t understand the church’s less than Christ-like approach to LGBT people. Some, like Fillion, wonder when the LGBT question became one of orthodoxy.

A day after the incident, on a Wheaton’s Forum Wall — a space for students to express their freedom of speech on various subjects — a threatening letter was posted. It was directed to “the enemy” (a term students told me they believe referred to both the student who asked the question and the LGBT community as a whole). The author (Roland Hesse was the name on the letter), took responsibility for the apple throwing, claiming it was a “warning.”

Justin Massey, a gay student at Wheaton, emailed a photo of the letter to Wheaton’s administration outlining his concerns: “This is unacceptable for a member of our college community, target a minority demographic - LGBT students, and is in no way representative of Christ,”

Due to federal law, the college isn’t able to officially comment on the disciplinary actions taken. However, Massey told TIME that administrators told him “the offending student will no longer be on campus, and if he is on campus, LGBT students that feel threatened will be immediately notified.”

Wheaton’s quick steps to remedy the situation is admirable. But we’re not getting to the heart of the issue if we end the conversation there.

This isn’t the first time a private Christian school has had issues with students posting homophobic letters. Last fall, a student at Azusa Pacific University, received a letter saying “f*ggots don’t belong at APU. Get Out.”  Like Wheaton, Azusa Pacific responded and tried to make amends.

But all of these administrative actions have been reactive, not proactive. They don’t get to the root of the problem.

Wheaton and other Christian schools systemically silence their LGBT Students. A year ago, over 100 Wheaton students protested an “ex-gay” presentation. Students say the school is silent on the dangers of reparative therapy – which has been proven to be a dangerous and damaging practice – and the students I talked to say there's a palpable lack of inclusion of the LGBT community on campus.

Indeed, neither Wheaton nor most Christian colleges have engaged directly with the LGBT students that live in their community. Instead, they bring other voices (typically “ex-gay) from off campus to promote a single damaging narrative. What this says to the students, especially those LGBT, is that their voice isn’t worth listening to.

The LGBT students I've spoken with say they are too often spoken at instead of with at Wheaton. This lack of inclusion leads to devaluing their role. It may have led the person behind the "Dear Enemy" letter to believe he was in the right.

Wheaton will never be the safe place for all students it aims to be until Wheaton engages LGBT students and proactively stimulates dialogue that is inclusive of all voices.