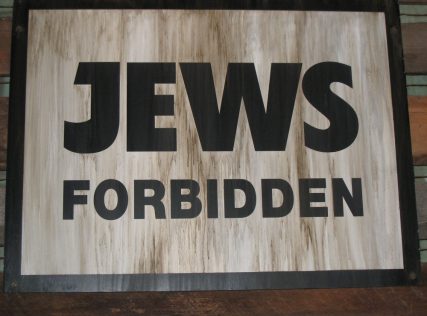 I attended a university with many Jewish students. One year during Hanukkah, the Jewish students’ organization sponsored a menorah-lighting, which ended with a group of us dancing the hora around the menorah.

A few evenings after that, a student lit a menorah in his dorm room, left the menorah unattended, and accidentally set fire to his room.

The next day, I overheard some students snickering in the cafeteria: “Do you think that the Jews are going to burn down the entire dorm and dance around it?” Echoes of the accusations of the Jews burning down the Reichstag in Germany, 1933.

Fast forward to this week. An online survey of 1,157 students, conducted by Trinity College professor Barry Kosmin and associate professor Ariela Keyser, reveals that more than half of American Jewish college students report that they have experienced anti-Semitism on campus.

Just in the last few weeks…

“Haters gonna hate,” they say — and in this case, the haters are students, faculty members, and administrators. Imagine being an undergraduate and standing up to a professor who is trashing Israel. Groups like Students for Justice in Palestine actively nurture hatred of Israel and advocate terrorism against Israel. The hate takes the form of BDS, anti-Israel rallies, verbal attacks, vandalism, and even physical threats. This movie makes the threat real and palpable.

Once upon a time, there were red lines between criticism of Israel’s policies, denial of Israel’s right to exist, and full-blown anti-Semitism. Those lines have increasingly blurred, and in some cases, they have disappeared.

If you want to read an excellent literary exploration of campus anti-Semitism, check out Nora Gold’s recent novel, Fields of Exile. It tells the story of Judith, an idealistic graduate student in social work at a Canadian university. She loves Israel, and she has spent much time in the Jewish state. As the story unfolds, Judith comes to understand that her department is a hotbed of anti-Israel activism, which exists under the guises of tolerance, diversity, and the cult of Palestinian victimization. She is increasingly marginalized. Her story does not end well. It is a wakeup call.

How do we begin to fix this situation?

There is an old cliché: “The war has come home.” Forgive the military metaphor, but this is a war: a war for the heart, mind, and soul of the American university. If American academia looks the other way as Jewish students are intimidated, then they will cease to have any kind of moral force. They will have squandered their entire intellectual legacy.

If the Jews lose this war, then everyone loses. Too much is as stake to let that happen.