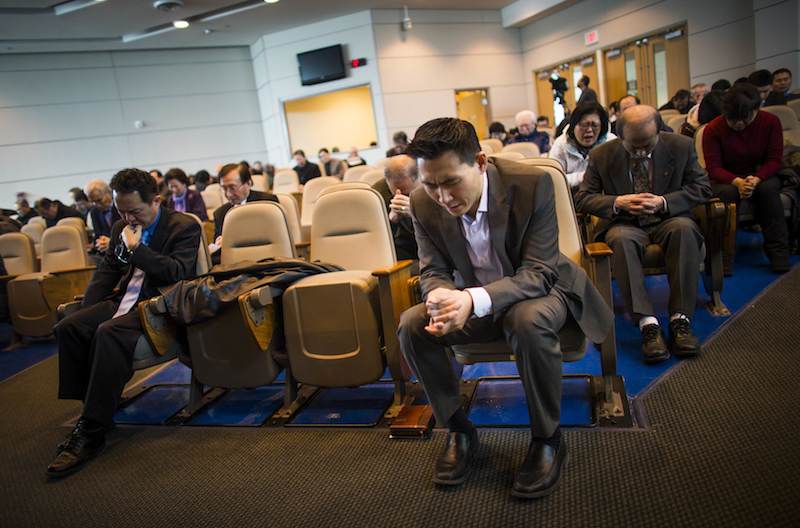 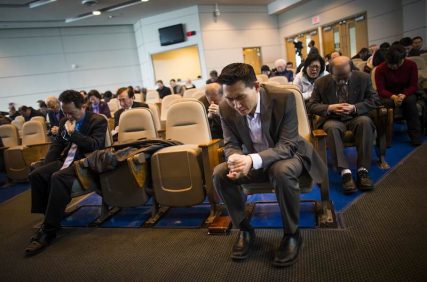 People take part in a prayer service for Reverend Hyeon Soo Lim, inside a chapel at the Light Korean Presbyterian Church in Mississauga, on March 9, 2015. Photo courtesy of REUTERS/Mark Blinch

TORONTO (Reuters) Hundreds of friends, parishioners and Korean-Canadian religious leaders gathered at a suburban Toronto church on Monday (March 9) to pray for a Canadian pastor detained in February by North Korean authorities while on a humanitarian mission.

The Rev. Hyeon Soo Lim, 60, leader of the 3,000-member Light Korean Presbyterian Church, was last heard from on Jan. 31. Church leaders say the Canadian government has told them it is working to secure his release.

Canada has had limited influence in North Korea since it suspended diplomatic ties with Pyongyang in 2010. Last week Sweden, which has an embassy in Pyonyang, said its ambassador is pressing for a meeting with a Canadian citizen detained by the isolated state.

"We have gathered to urge the North Korean, Canadian and the United Nations governments to return Rev. Lim to his family," said the Rev. Choong Sik Ryu, head of the Council of Korean Churches of Ontario.

South-Korean born Lim has visited North Korea more than 100 times since 1997 and has helped establish an orphanage and a nursing home there. He has lived in Canada since 1986 and is a Canadian citizen, according to church spokeswoman Lisa Pak.

"It took 70 years for the Israelites to be freed. This marks the 70th year for the Koreas to be divided against our will," said the Rev. Yo-Hwan Kim of the Toronto Korean Evangelical Church. "We can only pray for a miracle."

Kyung Sup Lee, who traveled to North Korea in 1997 on Lim's first aid mission to the country, said after the service that Lim had said he planned to resign from preaching to devote himself to humanitarian work.

"I believe Rev. Lim has always wanted to work toward the reunification of Koreas and spread the gospel everywhere, specifically North Korea," said Lee, 77.

The Rev. Jason Noh said Lim was making a routine visit to an orphanage in the Rajin area with another church elder when an economic export bureaucrat asked him to visit Pyongyang. He has not been heard from since.

North Korea and China have clamped down on Christian groups over the past year, and several American Christians have been detained by North Korea. Last month, China formally detained a Canadian man, Kevin Garratt, on suspicion of stealing state secrets.

September 21, 2020
Related Posts
By Alejandra Molina
In Oregon, churches and anti-fascists unite to provide mutual aid to fire evacuees and others in need
By Alejandra Molina
‘Your fight is my fight’: Latino clergy and faith leaders rally behind Black Lives Matter
By Alejandra Molina
Four young people of different faiths move into a home together, then a pandemic happens
By Jeffrey Salkin
Warning: Your piety might be dangerous to your health
By Emily McFarlan Miller
Crystals, chocolate, astral travel and good vibes for the soul