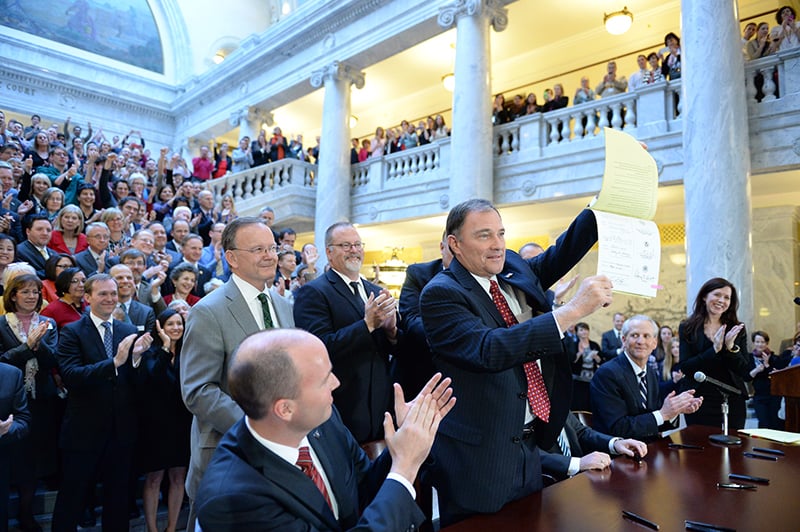 WASHINGTON (RNS) Utah’s new law extending employment and workplace protections to LGBT people and conscience protections to individuals, churches and faith-based associations extends an olive branch to both groups, even as it misses one key sticking point.

Panelists for two discussions hosted by the Brookings Institution on Monday (March 16) described key features of the legislation, noting that it is:

Even though other states may not replicate this law exactly, it can serve as a toolkit for orchestrating opposing forces to find common ground, legal and political, experts said.

Former Utah Gov. Michael Leavitt, a Mormon who cautioned that he was not a spokesman for the church, called the legislation “a great victory for the protection of conscience.”

Leavitt said the LDS church convened the effort to write the legislation with LGBT activists in an effort to heal the tensions between the two communities, inflamed when the church joined efforts to ban same-sex marriage in California in 2008.

Sarah Warbelow, legal director of the Human Rights Campaign, said the law will have a  “dramatically positive effect on the LGBT youth of Utah,” because it dramatizes to Mormon parents that their church accepts the dignity of LGBT people.

Clifford Rosky, professor of law at the University of Utah and board chairman of Equality Utah, said adding bans on discrimination based on sexual orientation and gender identity to the state’s anti-discrimination measures was a critical first step.

Rosky also cited the new speech protections for employees outside the workplace. If it came to light that “you donated for or against Prop 8 (the California state constitutional amendment banning gay marriage that was ruled unconstitutional in 2010), you can’t lose your job over it. That is a clear win-win in this conversation.”

People will come to see that protecting LGBT rights doesn’t destroy the religious character of their own families or communities or obliterate the idea of marriage that they see as a sacrament, said Robin Fretwell Wilson, director of the Program in Family Law and Policy at the University of Illinois College of Law.

However, all the panelists agreed there was one tool missing in the toolkit: public accommodations provisions that might ban discrimination in the sale of goods and services.

“It couldn’t legislatively be done,” said Leavitt. “There wasn’t agreement.”

But “the rubber meets the road on entitlement to be served,” said Nathan Diament, executive director of the Orthodox Union Advocacy Center.

Not every voice at Monday’s discussion celebrated the legislation.

Asking a question from the audience, Matt Bowman, of Alliance Defending Freedom, alleged that LGBT groups are “teaming up with abortion rights groups” to claim that their rights to access to services trump business owners’ and workers’ conscience rights.

Warbelow said the HRC has never advocated forcing anyone to conduct a marriage for any reason.

But, she said: “There is a difference between performing a marriage” and providing a service that would go toward an event. “The florist is providing goods, not participating in the wedding.”