WASHINGTON (RNS) The limiting of religious freedom is a perpetually contested question in American public life. Most recently, as states consider new laws and the U.S. Supreme Court prepares to rule on same-sex marriage, gay rights supporters and traditionalist Christians appear to be on a collision course. 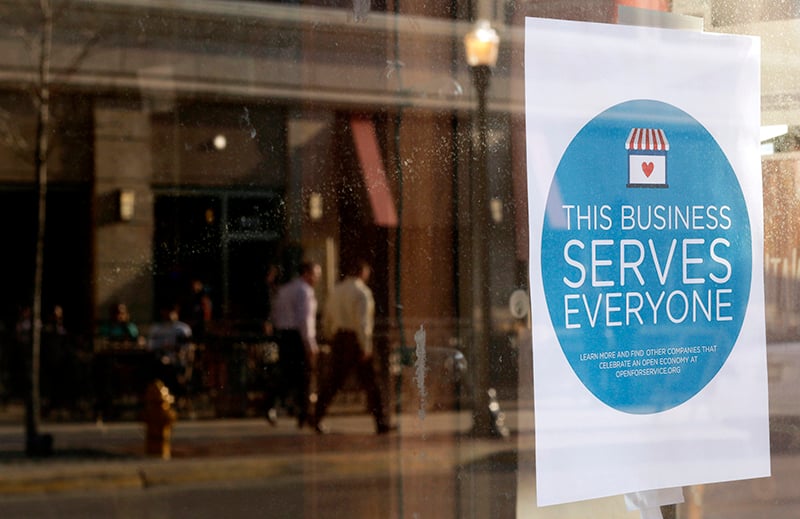 A sign reading “This business serves everyone” is placed in the window of Bernadette’s Barbershop in downtown Lafayette, Ind., on March 31, 2015. Photo courtesy of REUTERS/Nate Chute *Editors: This photo may only be republished with RNS-LUPFER-COLUMN, originally transmitted on April 14, 2015.

To make matters worse, whenever disputes between gay couples and conservative Christian wedding vendors arise, a well-funded professional grievance industry sends lawyers and media handlers out to convince the public that this is the great civil rights issue of our time.

As a new prevailing cultural consensus on homosexuality displaces a former one, it remains to be seen how the winners will treat the losers. From laws that impose punitive fines to rhetoric that places “religious liberty” in quotation marks so as to diminish it, the culture war’s apparent victors have not accorded religious freedom its due place of prominence in our public life.

The present tension between religious liberty and LGBT rights is unsustainable, but it is not insurmountable. Activists on both sides have been short on empathy for each other. Leaders have every incentive to portray their opponents as evil retrogrades hellbent on destroying society.

One reason each side talks past the other is that the religious and legal debates are oriented around different poles. The gay rights movement — which conservative Christian agitator Bryan Fischer derisively termed “Big Gay” — focuses on civil rights, including legal marriage and anti-discrimination laws. In this framework, it does not matter what religious people believe about sexual orientation or behavior.

In religion, the debate is primarily about affirmation. Regardless of civil law, religious organizations either affirm same-sex unions or they don’t. Legal debates are secondary to arguments over whether and how the church will amend its long-standing prohibitions against sex outside of monogamous, heterosexual marriage.

Disputes over wedding photographers, bakers and florists engender strong feelings because they embody the personal nature of the conflict. It is hurtful to be told by a local businessman that your upcoming wedding is so hopelessly immoral that the very idea of arranging flowers or baking a cake sickens him to his core.

Do wedding vendors who oppose same-sex marriage necessarily “participate in” or “celebrate” these unions? I’m not sure. I find photographers’ objections to be the most compelling and caterers’ arguments to be the least valid, with bakers and florists somewhere in between.

But I do know this: To the greatest extent possible, people should not be compelled against their conscience to provide services for an event they do not support.

I was married and divorced at a young age. When I got married again, a traditionalist wedding vendor might have declined my business, which is their right. I would have found someone else. I might have felt sad or angry that my neighbor judged my relationship to be immoral or unworthy. But I respect his conscience more than I need his flower arrangements. Religious liberty is inviolable. Affirmation is not a civil right, and it cannot be coerced.

By any measure, the gay rights movement has prevailed in the arenas of law, culture and public opinion. Still, millions of Americans will continue to believe that marriage is between a man and a woman. These people are not moral monsters.

I have qualms about expanding religious identity onto corporations. And many religious liberty claims made by businesses and people acting as government representatives are questionable. But we should not force private individuals and small-shop owners to violate their consciences when it is clearly not necessary to do so.

In the early republic, Baptist preacher John Leland spoke of “the rights of conscience inalienable.” In law and custom, conscience rights are sacrosanct. The success of the gay rights movement does not depend on the government’s compelling wedding vendors against their consciences. If stragglers eventually abandon their religious opposition to homosexuality, it will be because of persuasion, not coercion.