Jayden Mercado, 4, sits in his mother Yariluz Ocasio's lap while he gets an influenza vaccine at Boston Children's Hospital in Boston, Massachusetts in this file photo taken January 10, 2013. Photo courtesy of REUTERS/Brian Snyder/Files *Editors: This photo may only be republished with RNS-VACCINES-NJ, originally transmitted on February 3, 2015.
April 21, 2015
Reuters 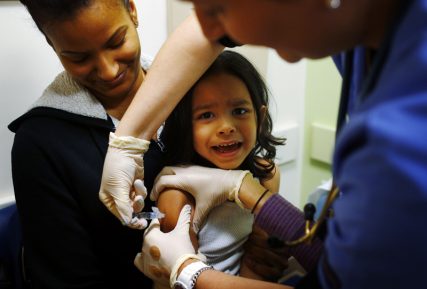 Jayden Mercado, 4, sits in his mother Yariluz Ocasio's lap while he gets an influenza vaccine at Boston Children's Hospital in Boston, Massachusetts in this file photo taken January 10, 2013. Photo courtesy of REUTERS/Brian Snyder/Files
*Editors: This photo may only be republished with RNS-VACCINES-NJ, originally transmitted on February 3, 2015.

SACRAMENTO, Calif. (Reuters) The author of a California bill to require school children to be vaccinated for such diseases as polio and measles regardless of their parents' personal beliefs said he would revive the measure, which stalled in the legislature last week.

The bill, introduced in the wake of a measles outbreak that began at Disneyland and sickened 147 people last year, was pulled before it could come to a vote in the Senate education committee last week amid intense opposition from religious groups and parents who fear side-effects from vaccines.

"These diseases not only paralyzed our country with fear, there are many people living amongst us who still bear the ravages of these diseases," said state Senator Richard Pan, a Democrat from Sacramento. "Why would we not demand that children be vaccinated before they enter school?"

Pan, a pediatrician, was flanked by two elderly polio survivors in wheelchairs as he announced that he would bring the bill up for consideration a second time in the Senate education committee on Wednesday (April 22).

He chided opponents of the bill who downplay the risks of the disease, which he said crippled up to 35,000 people a year in the United States before the vaccine became widespread.

Measles, he said, can cause hearing loss, encephalitis, pneumonia and death.

Authored by Pan and Democratic Senator Ben Allen of Santa Monica, the bill would end the so-called personal beliefs exemption in California's vaccination law, which allows parents to opt out if they have religious or other opposition to vaccination. It would still allow parents to opt out if a doctor says the child should not be vaccinated for medical reasons.

All U.S. states require vaccinations for children entering school unless they have a medical reason to avoid the shots, such as a weak immune system.

Most states also allow parents to opt out if their religion bans the protective procedure and about 20 allow personal beliefs exemptions, which in recent years have been used by parents who fear a now-debunked link between vaccines and autism, or worry about other health effects of children receiving shots.

Opposition from parents, many of them affluent and well-educated, have managed to kill similar bills introduced in the wake of the Disneyland outbreak, including one in Oregon.

Under a new provision added to the bill on Tuesday, unvaccinated children would be allowed to study together in organized private home-school environments.

(Reporting by By Sharon Bernstein.)