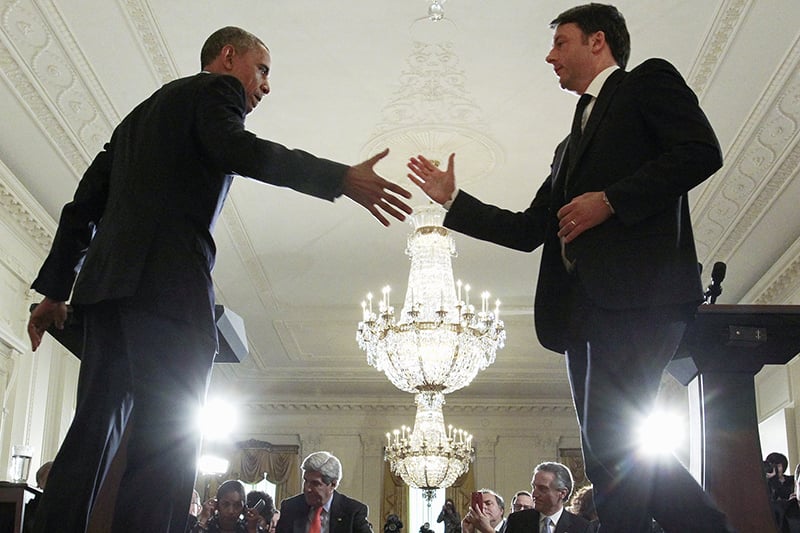 President Barack Obama greets Italian Prime Minister Matteo Renzi after their joint news conference in the East Room of the White House in Washington on April 17, 2015. Photo courtesy of REUTERS/Jonathan Ernst
*Editors: This photo may only be republished with RNS-POWERS-COLUMN, originally transmitted on April 21, 2015.

What do you call it when 12 men are drowned at sea for praying to Jesus?

Yet, when a throng of Muslims threw a dozen Christians overboard a migrant ship traveling from Libya to Italy, Prime Minister Matteo Renzi missed the opportunity to label it as such. Standing next to President Obama at their joint news conference Friday (April 17), Renzi dismissed it as a one-off event and said, “The problem is not a problem of (a) clash of religions.”

While the prime minister plunged his head into the sand, Italian authorities arrested and charged the Muslim migrants with “multiple aggravated murder motivated by religious hate,” according to the BBC.

As Renzi was questioned about the incident, Obama was mute on the killings. He failed to interject any sense of outrage or even tepid concern for the targeting of Christians for their faith. If a Christian mob on a ship bound for Italy threw 12 Muslims to their death for praying to Allah, does anyone think the president would have been so disinterested? When three North Carolina Muslims were gunned down by a virulent atheist, Obama rightly spoke out against the horrifying killings. But he just can’t seem to find any passion for the mass persecution of Middle Eastern Christians or the eradication of Christianity from its birthplace.

Religious persecution of Christians is rampant worldwide, as the Pew Research Center  has noted, but nowhere is it more prevalent than in the Middle East and Northern Africa, where followers of Jesus are the targets of religious cleansing. Pope Francis has repeatedly decried the persecution and begged the world for help, but it has had little impact. Western leaders — including Obama — will be remembered for their near silence as this human rights tragedy unfolded. The president’s mumblings about the atrocities visited upon Christians (usually extracted after public outcry over his silence) are few and far between. And it will be hard to forget his lecturing of Christians at the National Prayer Breakfast about the centuries-old Crusades while Middle Eastern Christians were at that moment being harassed, driven from their homes, tortured and murdered for their faith.

A week and a half after Obama’s National Prayer Breakfast speech, 21 Coptic Christians were beheaded for being “people of the cross.” Seven of the victims were former students of my friend and hero “Mama” Maggie Gobran, known as the “Mother Theresa of Cairo” for her work with the poorest of the poor. She told me these dear men grew up in rural Upper Egypt and had gone to Libya seeking work to support their families. They died with dignity as they called out to their God, while the cowardly murderers masked their faces.

Rather than hectoring Christians about their ancestors’ misdeeds, Obama should honor these men and the countless Middle Eastern Christians persecuted before them.

Kirsten Powers writes weekly for USA Today and is author of the upcoming “The Silencing: How the Left Is Killing Free Speech.” Photo by Len Spoden Photography, courtesy of Kristen Powers

Monday (April 20), there was more horrifying news: Islamic State terrorists released a video purporting to show more religiously motivated killing. According to CNN, before beheading and shooting two groups of Christians in Libya, a speaker said, “The Islamic State has offered the Christian community (the opportunity to convert to Islam or pay a tax for being Christian) many times and set a deadline for this, but the Christians never cooperated.”

So they kill them.

(Kirsten Powers writes weekly for USA Today and is author of the upcoming “The Silencing: How the Left Is Killing Free Speech.”)

News
Scholars call out Putin and the ‘escalation’ of persecution against Jehovah’s Witnesses in Russia
News
In Oregon, churches and anti-fascists unite to provide mutual aid to fire evacuees and others in need
News
Hong Kong issues warrant for Samuel Chu, an American citizen, activist and pastor’s son
Beliefs
Four young people of different faiths move into a home together, then a pandemic happens
Opinion
Keeping Baha’i prisoners, Iran threatens the entire country’s health
© Copyright 2020, Religion News Service. All rights reserved. Use of and/or registration on any portion of this site constitutes acceptance of our User Agreement and Privacy Policy, Privacy Statement and Cookie Notice. The material on this site may not be reproduced, distributed, transmitted, cached or otherwise used, except with the prior written permission of Religion News Service.