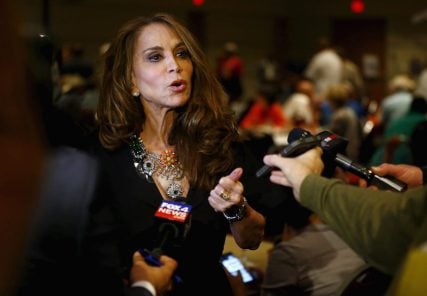 Political blogger Pamela Geller, American Freedom Defense Initiative’s Houston-based founder, speaks at the Muhammad Art Exhibit and Contest, which is sponsored by the American Freedom Defense Initiative, in Garland, Texas May 3, 2015. Two gunmen opened fire on Sunday at the art exhibit in Garland, Texas, that was organized by an anti-Islamic group and featured caricatures of the Prophet Mohammad and were themselves shot dead at the scene by police officers, city officials and police said. Photo by Mike Stone, courtesy of Reuters *Eds: This photo may only be republished with RNS-GELLER-TEXAS, originally transmitted on May 4, 2015.

Pamela Geller is good at getting attention.

She’s a celebrity blogger and fiery activist who founded the American Freedom Defense Initiative, which describes itself as a human rights organization that defends freedom of speech by speaking out against global jihad and Islamic supremacists. She runs a sister organization called Stop Islamization of America.

The groups are known for controversial activism against Islam.

Now Geller and the Initiative are at the center of another controversy after a shooting Sunday (May 3) outside its “Muhammad Art Exhibit and Cartoon Contest” in Garland, Texas, about 20 miles from Dallas. Two suspects shot at a security guard and police officer outside the event and were shot and killed by police.

Geller’s group sponsored the contest and billed it as an exercise in free speech, which it said is under attack by radical Islamists like those who attacked French magazine Charlie Hebdo in January.

“This is a war,” Geller said on her website after the shooting. “This is war on free speech. What are we going to do? Are we going to surrender to these monsters?”

Geller did not respond to messages sent by email and to the Initiative’s Facebook page.

Geller and her fiery rhetoric have made headlines before.

She became the face of the opposition to construction of a mosque near Ground Zero in 2010. Through her groups, she launched controversial ads on Washington subways in 2012 that read, “In any war between the civilized man and the savage, support the civilized man. Support Israel. Defeat Jihad.”

In April, Geller’s group won a federal court victory to allow the ads to run on New York City buses and trains. New York’s Metropolitan Transportation Authority had tried to stop similar ads on their buses and trains because it said the ads could incite violence between Muslims and Jews, but a court ruling allowed the ads based on the First Amendment guarantee of free speech. The new ads will show a photo of a young man in a checkered headscarf that will say, “Killing Jews is Worship that draws us close to Allah. That’s His Jihad. What’s yours?”

Such rhetoric has landed the Initiative on the Southern Poverty Law Center’s list of hate groups as an active anti-Muslim group.

The center calls Geller the movement’s “most visible and flamboyant figurehead.”

“Geller has promulgated some of the most bizarre conspiracy theories found on the extreme right, including claims that President Obama is the love child of Malcolm X, that Obama was once involved with a ‘crack whore,’ that his birth certificate is a forgery, that his late mother posed nude for pornographic photos, and that he was a Muslim in his youth who never renounced Islam,” the center says in a profile of Geller on its website.

Geller dismisses the charge that she and the Initiative are extremists.

“Who designated the SPLC as a legitimate authority? They are a radical leftist group who targets patriots, vets and even GOP presidential candidates,” she told CNN. “They have never named a jihadi group as a hate group.”

She told CNN after the shooting that such violence won’t stop her group from sponsoring similar events in the future.

“I will not abridge my freedoms so as not to offend savages,” Geller said. “Freedom of speech is under violent assault here.”

News
An image of the Prophet Muhammad ignites an academic storm
Follow us on Facebook!
Submit your photos to RNS