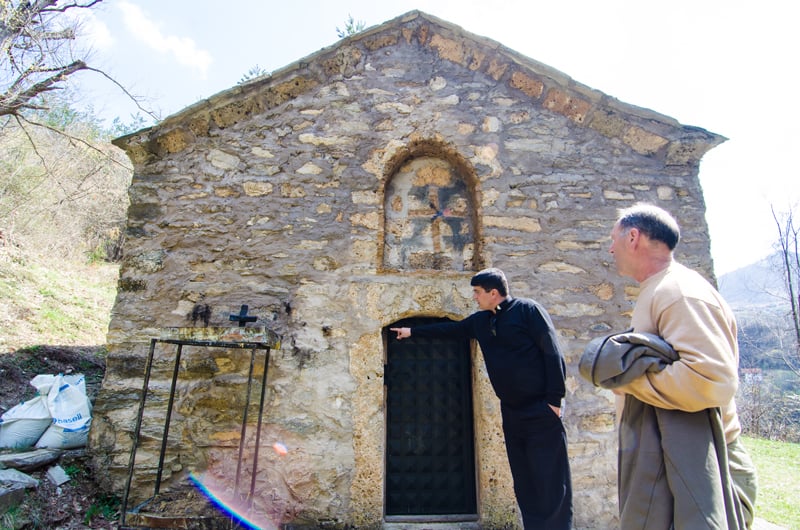 Don Albert Jakaj explains the architecture of St. John Church to the village locals, including the mayor of Brod, right, in Kosovo on April 13, 2015. Jakaj believes the church is a Roman Catholic burial church. Religion News Service photo by Valerie Plesch

BROD, Kosovo (RNS) The Catholic priest followed the village elders up a narrow road that curved between the green hills in the tiny hamlet of Gjonaj in southern Kosovo.

As the priest, Don Albert Jakaj, 36, emerged from the wooded path, he saw the light gray stone church, believed by locals to be a thousand years old, surrounded by tall pine trees.

Jakaj had traveled to Gjonaj at the request of Avni Ademi, 35, a local who contacted the priest to get his opinion on the origin of the church and to validate his belief that the church belongs to former local Roman Catholics before the village converted to Islam.

The Serbian Orthodox Church claims ownership of the property and holds the keys to the building, which it renovated in 1993. But area residents believe it’s an ancient Albanian church, and they want it back.

Old churches in Kosovo such as the one in Gjonaj are reminders of the country’s deep-rooted Christian history, one some locals would like to resurrect.

“All the Balkans were Christian,” Jakaj said, referring to the legacy of the Roman Empire’s dominion of the region 2,000 years ago. 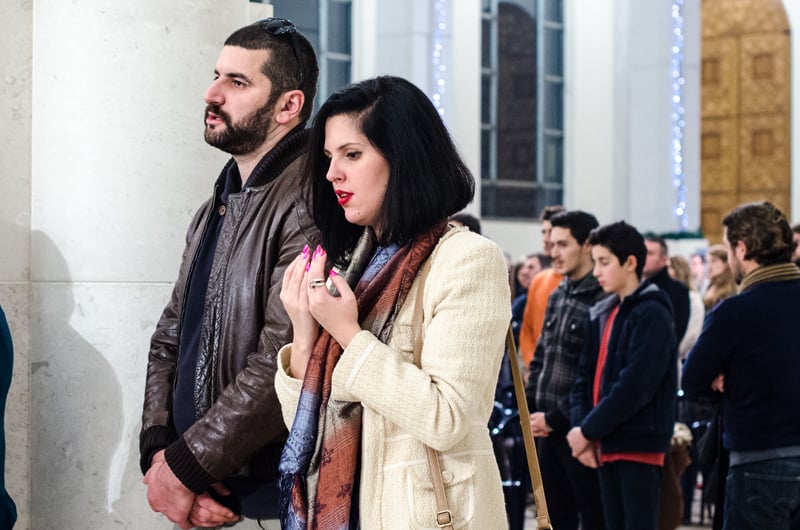 Catholics from the local and international community attend Christmas Eve Mass at Mother Teresa Cathedral in Pristina, Kosovo. There are about 65,000 Catholics in Kosovo, a country that is predominantly Muslim. Religion News Service photo by Valerie Plesch

Under the Ottoman Empire, which ruled Kosovo from the early 15th century until 1912, most Albanian Kosovars converted to Islam.

But today, Jakaj and others are on a mission that they say reflects a renaissance of Catholicism in the country. Muslim Kosovars are supporting the effort, too, even though most of Brod is now Muslim.

“This is our history of our nation,” said Ademi, whose forefathers were Catholic. “These are our first steps toward reclaiming our cultural heritage.”

Officially, 90 percent of the population in Kosovo is Muslim; only 3 percent is Catholic.

But Catholic Bishop Dode Gjergji thinks those numbers hide the true spiritual affinities of Kosovars. Gjergji said only 10 percent of Kosovars practice their Muslim faith; the rest are secular.

The shift celebrated by Gjergji has not resulted in an upsurge in church membership. Officials from Kosovo’s Roman Catholic Diocese in Pristina said they have seen modest growth over the years. In 2014, the diocese registered 30 baptisms.

Pushing back against the tide of secularism is tough, but Gjergji applauds those who have come forward. 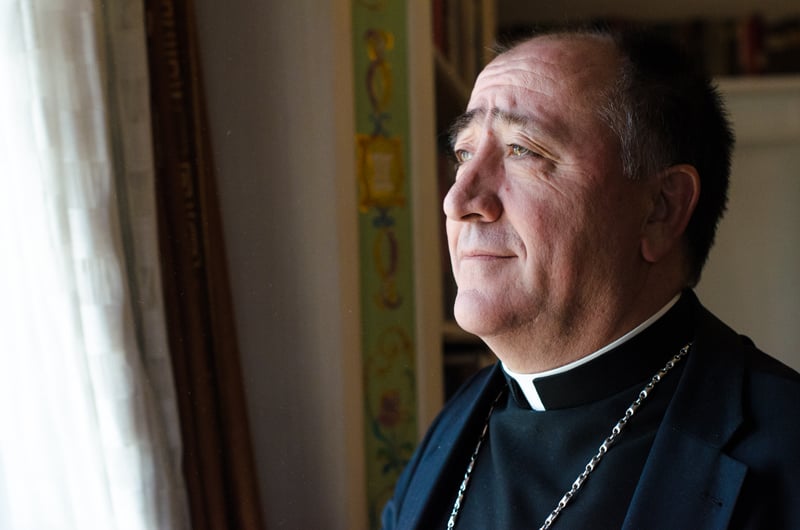 A portrait of Dode Gjergji, the bishop of Kosovo, at his residence inside Mother Teresa Cathedral in Pristina, Kosovo, on April 27, 2015. Religion News Service photo by Valerie Plesch

“We are very satisfied because in this time of trouble and insecurity it takes a lot of courage for someone to declare (they) want to go back to (their) roots,” he said.

Kosovo’s small but dynamic Catholic population technically does not include the “Laramans,” or Catholic Albanians who converted to Islam under the Ottomans to avoid paying taxes levied on non-Muslims.

Agron Bytyqi, 41, a former Kosovo Liberation Army fighter who is now a painter and art professor at the University of Pristina, grew up with a Catholic father and Muslim mother.

“As a kid I didn’t know what religion I had but when I became an adult, I had the right to decide which religion was meant to be mine,” he said. He was baptized in 1995.

The epicenter of Laramans, or crypto-Catholics who hid their true faith, is in eastern Kosovo. Around half the households in the village of Zheger are Laramans, for example. No church stands in the village, but the Laramans are known to light candles and pray at home in accordance with Catholic traditions.

One Laraman, Rexhep Sejdiu, has lived in Zheger for 38 years and runs a gas station.

“I feel like a Catholic,” he said, adding that he rarely discusses his faith outside his family. He visits Jakaj’s church at night in secret and by day passes as a Muslim.

As part of the Kosovo Catholic Church’s effort to reassert itself, Jakaj has tried to bring the Laraman community into the fold of the diocese, but to no avail.

“Laramans are afraid to declare themselves as Catholics,” the priest said.

That’s because revealing one’s Christian faith could cause problems, such as making it impossible for their children to marry.

Laramans approached on the streets of Zheger declined to be identified as Catholics, explaining they couldn’t be open about their lifestyle.

Jeton Thaqi, who coordinates all catechumens in Kosovo, said social pressures were strong.

“(One) reason is the mentality because if one family or one circle were always Muslims, if someone changes religion and takes a new religion, it’s not easily accepted by others,” he said. “Not everyone is brave (enough) to face these realities.”

News
Taco trucks and voter guides boost political profiles of faith communities at the margins
News
A dissenting Catholic community in California helps Latinos cope with COVID-19’s disparities
News
Study: Biden still leads among Latino Christian voters, but Trump’s support has grown
News
In Oregon, churches and anti-fascists unite to provide mutual aid to fire evacuees and others in need
Opinion
What good is faith when your fertility treatments aren’t working?
© Copyright 2020, Religion News Service. All rights reserved. Use of and/or registration on any portion of this site constitutes acceptance of our User Agreement and Privacy Policy, Privacy Statement and Cookie Notice. The material on this site may not be reproduced, distributed, transmitted, cached or otherwise used, except with the prior written permission of Religion News Service.