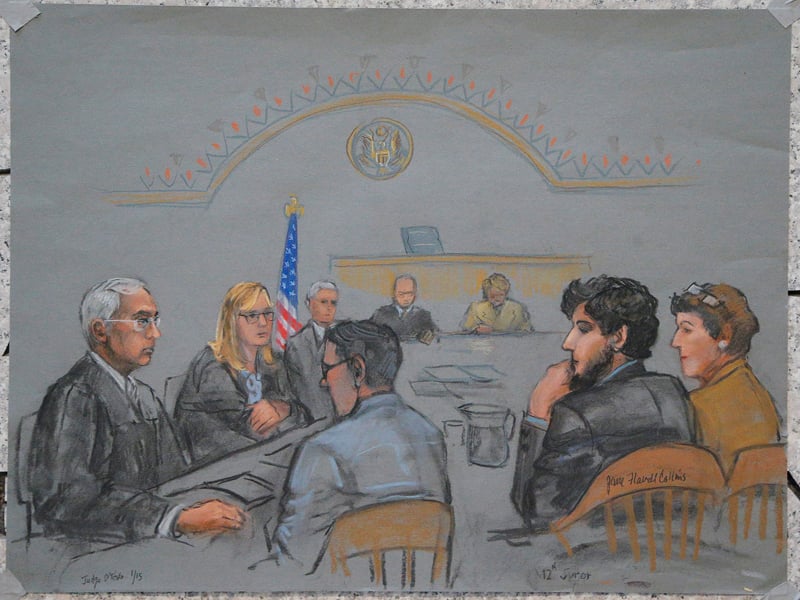 A courtroom sketch shows Boston Marathon bombing suspect Dzhokhar Tsarnaev (2nd R) during the jury selection process in his trial at the federal courthouse in Boston, Massachusetts on January 15, 2015. Photo courtesy of REUTERS/Jane Flavell Collins *Note: This photo may ONLY be republished with RNS-BOSTON-JURY, originally published on January 26, 2015
May 20, 2015
Reuters 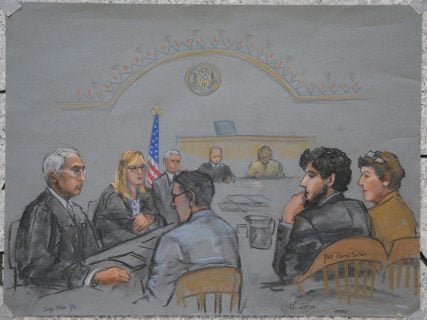 BOSTON (Reuters) Boston Marathon bomber Dzhokhar Tsarnaev will face about 20 of his victims at a hearing next month when he will be formally sentenced to die for the 2013 attack, a U.S. judge said on Tuesday.

The same jury that found Tsarnaev, 21, guilty of killing three people and injuring 264 with a pair of homemade pressure-cooker bombs at the race's crowded finish line on April 15, 2013, sentenced him to death for his crimes last week.

"We could proceed rather expeditiously," in making the jury's sentence formal, U.S. District Judge George O'Toole told prosecutors and defense attorneys in the same courtroom where Tsarnaev was tried. He did not set a date for the one-day sentencing hearing, but said he would do so soon.

Federal prosecutors said that about 20 victims, a group that includes people injured by the bombing and those whose friends or family were hurt or killed, have indicated they wish to speak at the sentencing hearing.

Tsarnaev, who did not appear at Tuesday's hearing, would also have the right to speak at the sentencing hearing but would not be obligated to say anything. He did not speak in his own defense during his trial.

His attorneys are certain to appeal the death sentence and legal wrangling over his fate could play out over the course of years if not decades. Just three of the 74 people sentenced to death in the United States for federal crimes since 1988 have been executed.

During Tsarnaev's trial, the jury saw graphic photos and videos of the explosions of the bombs as well as the bloody aftermath of the blasts, when victims lying in puddles of blood screamed in agony and first responders struggled to save them while worrying about possible follow-up attacks.

Defense attorneys had argued that Tsarnaev's 26-year-old brother, Tamerlan, was the driving force behind the attack, an argument the jury rejected in sentencing him to death rather than life in prison without possibility of release.