(RNS) Summer is the time when many Protestant denominations hold annual or biennial meetings to assess the state of their union, make policy decisions, and figure out the best way to maximize their partnership.

The General Assembly of the Presbyterian Church in America meets June 8-12. Thousands of “messengers” from the churches of the Southern Baptist Convention will gather in Columbus, Ohio, on June 16-17. During the same week, the Evangelical Free Church of America will host its national conference in Vista, Calif. 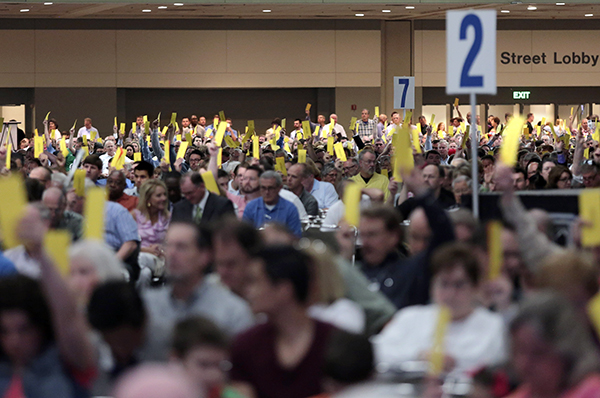 Thousands of Southern Baptist Convention delegates voted on a new president and several resolutions at their meeting on June 10, 2014. Photo by Van Payne via Baptist Press

Denominational meetings may go on as usual this summer, but denominations, as a whole, have fallen on hard times. The Pew Forum’s survey of America’s religious landscape showed a rapidly declining percentage of Americans claiming a Christian identity. Among the 70 percent who still claim to be Christian, fewer and fewer identify themselves by their church’s denominational affiliation.

A century ago, most Christians saw themselves as Baptists, Presbyterians, Catholics, Lutherans, and so forth. In the last 50 years, with the decline of mainline Protestantism and the rise of the cross-denominational evangelical movement, many American Christians began to abandon their denominational homes.

Today, many of the largest and fastest-growing churches in America do not belong to a denomination, while many churches that remain denominational have dropped the moniker from their church’s name (perhaps to avoid unnecessary barriers or baggage), and have thus become like their “nondenominational” counterparts, at least outwardly.

The bad news is that loyalty to historic church groups is waning, and for this reason, many Christians feel free to jump from one church to another, regardless of denominational identity.

The good news is that the imminent demise of denominations is premature, and a denominational affiliation is not the “hindrance” many believers consider it to be.

A recent survey by LifeWay Research shows that nonreligious people have a more favorable than unfavorable view toward a wide range of faiths. While many Christians have a difficult time explaining the differences between denominations, the nonreligious are even less likely to understand these differences.

That’s why having a denominational affiliation in your church’s name is unlikely to matter much to someone considering your church. In fact, the “Baptist” and “Catholic” labels have the highest rate of familiarity and they top the survey for favorable impressions.

As a millennial, I’m supposed to be adverse to institutions and interdenominational squabbling. The individualistic ethos and anti-institutional attitude of my generation has led many of my peers to dismiss the relevance of denominational structures. “Why bother with red tape when you want to get stuff done?” they ask.

To be sure, denominations contain relics of a bygone era and many elements need to be repurposed, or, in some cases, done away with. But my response is: “Why reinvent a system or structure that already exists?” For me, it’s a matter of stewardship, a willingness to work within a denominational structure and make it better, not do away with it and start from scratch.

But others might say, shouldn’t we downplay denominations and celebrate “the ecumenism of the trenches”? After all, we’re stronger when we stand together on the cultural battlefield and cross denominational lines when it comes to serving the poor, caring for the environment, or speaking up on the sanctity of all human life, and the reality of marriage.

I recognize the benefit of “mere Christianity,” the term C. S. Lewis used to describe Christians who worship in various “rooms” (where they approach various aspects of faith and practice differently), but then meet together in the hallway (to enjoy fellowship and unity in the foundational tenets of the faith). But I also see the benefit of church life in its glorious particularity — not a watered-down “we appeal to everyone” generic church experience, but a textured and historic approach to Christianity.

The question for Christians in denominational churches is this: How will we steward the resources and institutions we’ve received for the mission Christ has given us? That question should be at the forefront of all the annual gatherings taking place this summer, because the denominations most likely to thrive are those that devote their attention and resources not to the perpetuation of their own identity, but to the fulfilling of Jesus’ “Great Commission.”