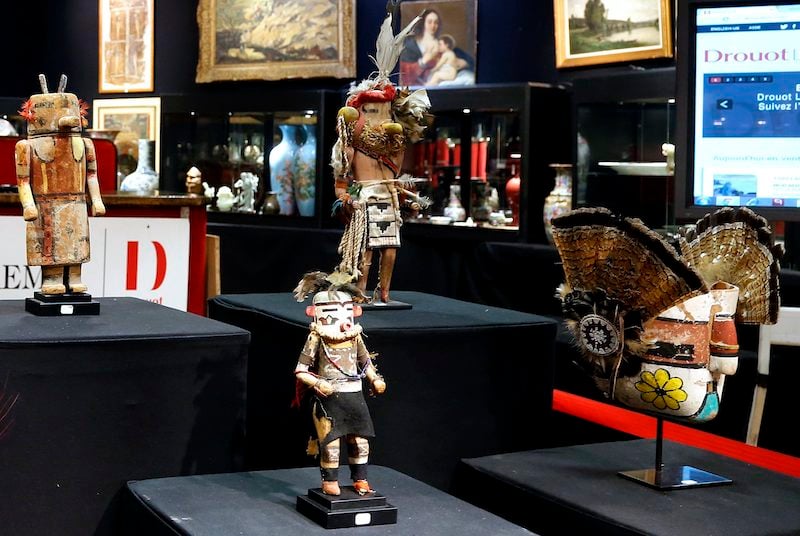 Sacred Hopi and Acoma objects are displayed at the Drouot auction house in Paris prior to auction. Photo by Jacky Naegelen courtesy of Reuters
June 11, 2015
Reuters

Sacred Hopi and Acoma objects are displayed at the Drouot auction house in Paris prior to auction. Photo by Jacky Naegelen courtesy of Reuters

PARIS (Reuters) A collection of sacred masks and statues belonging to the Native American Hopi tribe have gone under the hammer at a Paris auction despite calls that the sale be canceled.

The Hopi, who still live in the high desert of the Colorado Plateau in Arizona, consider the artifacts sacred, representing messengers to the gods and the spirits of ancestors and natural forces such as animals, plants or the sun.

Painted in a variety of colors, they are made of animal skins, fabric and other natural materials and decorated with feathers and hair.

"Hopi Indians are totally opposed to the trade of these objects and for these objects to be shown, (their images) published and scattered," said Jean-Patrick Razon, head of Survival International, which defends cultural heritage.

"According to them, they are not marketable items, they are what they call 'friends', 'spiritual friends', which have to return to their homeland."

Backed by supporters in the United States, the tribe has mounted legal challenges to prevent such auctions. Wednesday's sale at the Drouot-Richelieu auction house included seven masks and statues dating from the early 20th century.

Hopi cultural leader Sam Tenakhongva who traveled to Paris to try to stop the sale said the items were being auctioned in France probably because U.S. collectors had taken them out of museums and did not manage to sell them there.

"They took too many and there is no place for them to liquidate them ... so they started seeking private buyers," he said. "To me it's something that can't be bought or sold. There is no price value on it."

A spokeswoman for the auction house could not immediately confirm the final sale total but auction results showed one Hopi mask selling for 11,000 euros ($12,390) and a rare statue for 75,000 euros. ($1 = 0.8877 euros) (Reporting by Reuters Television; Additional reporting by Marie-Louise Gumuchian in London; Editing by Alison Williams)