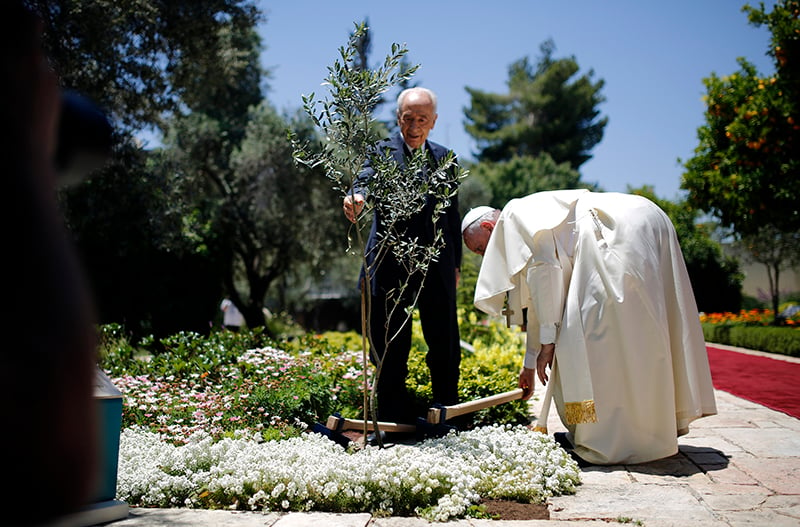 Pope Francis, right, and Israel’s President Shimon Peres plant an olive tree after their meeting at the president’s residence in Jerusalem on May 26, 2014. Photo courtesy of REUTERS/Amir Cohen
*Editors: This photo may only be republished with RNS-POPE-HUNGER, originally transmitted on June 11, 2015.

VATICAN CITY (RNS) People must change their lifestyles and attitudes to help defeat hunger, Pope Francis said Thursday (June 11), a hint of what may be coming in his much-anticipated environmental encyclical next week.

“We must begin with our daily lives if we want to change lifestyles, aware that our small gestures can guarantee sustainability and the future of the human family,” said Francis, addressing delegates at a conference hosted by the U.N. Food and Agriculture Organization.

“Let us modify our relationship with natural resources, land use, consumption, and eliminate waste. Thus shall we defeat hunger,” he added.

Francis also threw the Catholic Church’s full backing behind initiatives for the sustainable use of resources, stating that such work was important for agricultural development.

“The church is committed to promoting the change of attitude necessary for the good of future generations,” he said.

The pope’s speech comes a week before his encyclical on the environment is released. The document is expected to have a significant impact on the Catholic world and beyond in pushing religious people to make climate change a galvanizing concern.

In April, the Vatican organized a summit that brought together top scientists and U.N. Secretary-General Ban Ki-moon to discuss climate change with Vatican officials.

Speaking at the event, Cardinal Peter Turkson urged Catholics to save the environment: “This is an all-embracing moral imperative: to protect and care for both creation, our garden home, and the human person who dwells herein — and to take action to achieve this.”