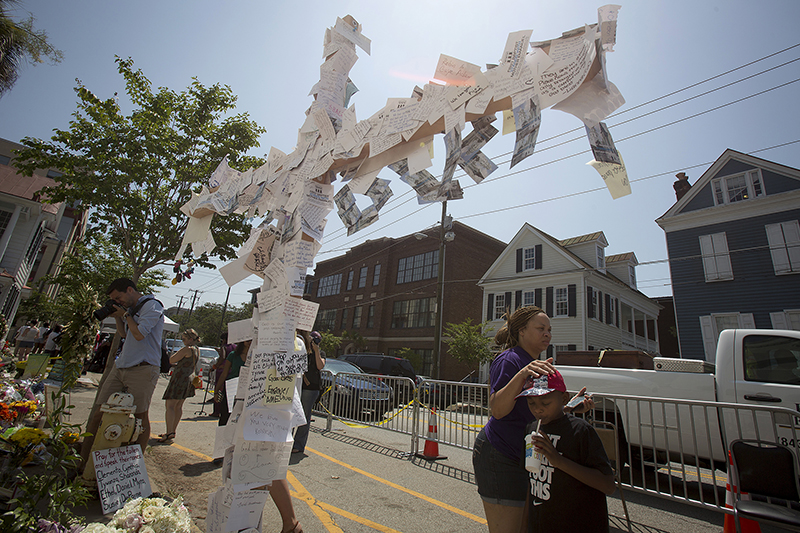 A mother and son stand at a makeshift memorial for victims of a mass shooting, outside the Emanuel African Methodist Episcopal Church in Charleston, on June 22, 2015. Photo courtesy of REUTERS/Carlo Allegri
*Editors: This photo may only be republished with RNS-GUSHEE-COLUMN, originally transmitted on June 24, 2015.

Inevitably, after the massacre at Emanuel AME Church, people are beginning to talk about arming congregants for self-defense. It is a sad image: 25 souls sitting around at Wednesday night prayer meeting, some packing heat in case the next church attacker should happen to be among them.

Some people consider it a ridiculous idea, or dangerous, or even sacrilegious: guns don’t belong in the house of the Lord Jesus, who taught turning the other cheek and peacemaking; guns don’t belong in the hands of angry people, and Lord knows people sometimes get real angry in church. Imagine an enraged deacon calling for a vote on whether to fire the pastor, gun in hand. (This might affect the church’s democratic process just a bit.)

Others have been in favor of guns in church for a long time. “Open carry” and/or “concealed carry” legislation has already been passed in numerous states, with application to numerous public places, including churches.

In Georgia last year, local church leaders found themselves on opposite sides of the issue, breaking down pretty neatly along left/right lines – yet another reminder that political ideology almost always seems stronger than shared Christian commitment in our red/blue culture. In the end, opponents managed to get an opt-in rather than opt-out system, so that churches would have to declare “guns welcome here” rather than having to declare the opposite. (An interesting addition to the run-of-the-mill messages on church signs.)

My most core Christian convictions center in the lordship of Jesus Christ, who laid down his life but did not take anyone’s life — and taught his followers the same pattern. When he could have defended himself, he did not. When the early church could have defended itself, it did not. Martyrdom and not defensive violence became the Christian paradigm. The early church dreamed of and worked for a renewed world and an end to its bloody violence.

But eventually Christians came to a theoretically limited embrace of violence, first in defense of the (supposedly Christian) Roman state and then its successors after the 4th century. Sometimes they embraced violence in the name of both state and church, for example, in suppressing heretics. Christians tended to support and participate in the violence governmental leaders ordered them to commit in criminal justice and in war, though just war/just violence theory set some limits – which gradually became refined over time.

Just war thinkers always drew a sharp line between defensive and offensive violence, between justified and unjustified force. But just war theory was primarily focused on the defense of the community or the state, not the individual Christian or the congregation. Romans 13:1-7 was read to authorize state violence as a deterrent, as defense, and as punishment of the wicked for violating communal peace and harming innocent people. But responsibility for executing that violence was left in the hands of government and its officials, which could and did include individual Christians but was separated from the function of the church. I could be shown to be wrong, but my reading of the Christian tradition is that the idea of heavily armed congregations hunkered down in self-defense in their houses of worship is a foreign concept.

But maybe that’s because for most of Christian history and in most places Christians did not need to feel afraid when they gathered in church. Excluding Muslim-Christian violence on those particular frontier lines — and after Christians in Europe and the colonies figured out how to stop killing each other over doctrinal differences — the average Christian didn’t need to be afraid of violence when she went to church.

This, of course, has not always been the case for the historic black churches in the United States, as Emanuel AME’s own history attests — though most white American Christians did not really notice before last week. As the center of African-American communal life, and often as the focal point of resistance to racist injustice, the black churches have periodically been victimized by violence. And yet I am not aware of any general pattern of African American churches arming themselves in self-defense.

Perhaps that will change after last week. Certainly a general posture of open hospitality to the stranger could well be threatened. 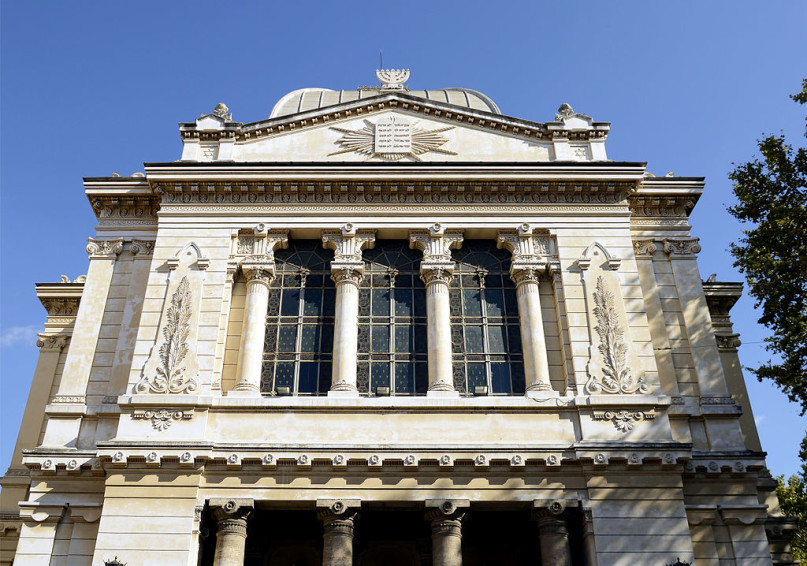 A front view of the Great Synagogue of Rome.

I keep thinking about one stubborn fact of my own (limited) experience: I have never attended a Christian church that employed armed security, and I have never visited a Jewish synagogue that was not guarded by armed security. I first noticed it at a prosperous synagogue many years ago in northern Virginia but since then have seen it elsewhere in the US and abroad. I will never forget when my wife and I visited the historic Great Synagogue in Rome — where a 2-year-old boy had been murdered, and 34 children injured, in a horrific 1982 attack on a Shabbat service. A machine-gun toting Italian police officer guarded that synagogue the day we were there. Armed security was certainly present in Jerusalem when I visited a synagogue in that city.

People regularly victimized by violence, including in their holy places, will seek to protect themselves. I cannot fault them for it. I fault those whose crimes have evoked this response.

Bottom line: mosques, synagogues, churches, and other holy places should not require armed security. But sometimes, in our wicked world, they face real threats to the unthreatening people praying there. State officials bear primary responsibility to protect those who are vulnerable. If they won’t or can’t do their job, it is terribly sad but not inappropriate for houses of worship to pay for the level of security required to keep their children and senior citizens from being murdered. This is preferable to the other solution – arming lightly trained or untrained civilians whose weapons probably risk doing far more harm than good.

May none of us ever stop yearning and working for the day when all this killing will end.